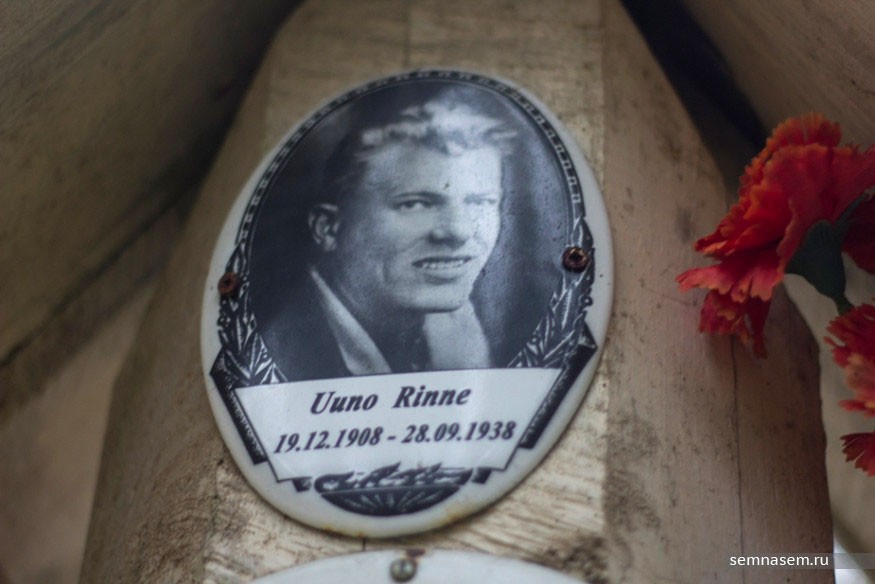 Marking the annual Day of Remembrance for the Victims of Political Repression, the official Karelia strove not to mention the name of Yury Dmitriev, one of the pioneers in locating and investigating such sites of mass burial.
By

On Monday, 30 October 2017, the Karelian capital Petrozavodsk marked the annual Day of Remembrance for the Victims of Political Repression. At the city’s Zaretsky Graveyard and then at Krasny Bor access to the microphone was limited to those who talked about spiritual values, Holy Russia and forgiveness. Our correspondent observed how official Karelia strove not to mention the name of Yury Dmitriev, one of the pioneers in locating and investigating such sites of mass burial.

Ancient crosses tower over the tall yellow grass next to the Church of the Exaltation of the Cross. The Zaretsky Graveyard is one of the oldest in Petrozavodsk [itself founded in 1703 tr.]. The first graves were dug here in 1724. Twenty-six years ago, on 30 October 1991, the remains of those executed during mass repression of the Stalin era were reburied here. They were found not far from Petrozavodsk by State Duma deputy Ivan Chukhin and his aide Yury Dmitriev, a man who would go on to find the bones of those executed at Sandarmokh and Krasny Bor.

Neither Chukhin nor Dmitriev could take part in Monday’s act of remembrance. The first died twenty years ago; the second has been held since December last year in the Petrozavodsk detention centre No 1. Dmitriev is now on trial, accused of making pornographic materials and illegal possession of a firearm. His place at the ceremony was taken by Katya Klodt, his daughter, who came there with her son Daniil.

The gathering at the Zaretsky Graveyard began at approximately 10 am. First to speak was Sergei Kiselyov, the Karelian Republic’s minister for ethnic policy. Then the microphone passed to Karelian activist Anatoly Grigoryev who said that terror was unacceptable in the 21st century and that we must remember the events of the 1930s:

“This morning I listened to Radio Russia, the national news program, and there was not a word about the Day of Remembrance of the Victims of Political Repression. Let us remember our murdered forbears, so that nothing of the kind ever happens again.”

There followed seconds of silence, broken only by the ticking of a metronome. One minute of silence, the laying of flowers and within 20 minutes even the microphone had gone – none of the assembled relatives of the dead had been given the chance to speak.

“We usually go out to Krasny Bor,” said pensioner Nina Sizova. “We don’t know exactly where our grandfather lies buried, but we put up a cross there.”

Her grandfather was arrested in 1938. The family still remember him with “great sorrow”. Nina doesn’t know who found the remains of the executed in Karelia. It was Boris Strogalshchikov, from Petrozavodsk, who wanted to tell us about that.

“It’s a big story. I wanted the chance to speak. Had they let me, I would have spoken in defence of Yury Dmitriev.”

No one said a thing at the Zaretsky Graveyard about Dmitriev.

“There were a great many fine words, but I got the impression that these cemeteries found themselves somehow. There was not one word about my father,” said Katya Klodt, indignantly.

At Krasny Bor, schoolchildren recited poems about Russia, and sang of its saintly last Tsar Nicholas II. Valentina Pivnenko, State Deputy for Karelia, then spoke of spiritual values, and the internal and external foes of Russia. She asked forgiveness from everyone, just in case: both for the executed and for those who shot them and were “forced to carry out” the sentences.

After her speech activists and volunteers from Petrozavodsk asked why she had not mentioned Yury Dmitriev.

“Do you know who was here first, in 1958?” she demanded. “Why should I mention someone by name just because you like him?” she asked.

She mentioned only Sergei Chugunkov from the village of Derevyannoe who, together with his father, discovered the Krasny Bor burial pits. His grandfather Dmitry had become an accidental witness to the shootings when he saw soldiers and vehicles and heard shots. The security men let him go and for years the story remained a family secret. Dmitry Chugunkov died without showing his son or grandson the exact location.

Sergei Chugunkov admitted that when he found the burial site he had a sense of relief: in all, 1,193 people were shot dead at Krasny Bor in 1937 to 1938.

“It was on 29 October 1997 — I remember the date very well — after I had managed to visit Sandarmokh and saw the characteristic sunken pits there that my father and I came here and discovered these burials. Next, we informed the prosecutor’s office, the police and after that work began on the memorial to the dead. In 1998 and 1999, together with Yury Dmitriev, we opened several the burial pits and in 1998 the district administration gave us some funding, so we could open the memorial cemetery at Krasny Bor.”

The name of Yury Dmitriev would be mentioned more than once at Krasny Bor on Monday, 30 October 2017. But not by any of the speakers given access to the microphone. Those who wished to talk about the historian were not give the chance.

In the words of Arto Rinne, musician and singer with the Sattuma group, if you wanted to speak you had to sign up a month before the event. Distressed, Arto walked over to the cross that bears the photograph of his grandfather who was shot right here, in Krasny Bor.

“I wanted to be one of the first to speak. I wanted to tell people about my grandfather and a couple of words about the film. First, though, I wanted to say that no one had mentioned Yury Dmitriev here by name. Not once. He was always here, every year. Now he’s in prison, on fabricated, totally absurd, charges, in my view. I wanted to wish him good health and a speedy release.”

On 8 December at the Premiere cinema in Petrozavodsk, added Arto, there will be a showing of “The Eternal Path”, a film about the life of Finns in Karelia during the 1930s. Shot in Finland, the film is based on the novel by Finnish novelist Antti Tuuri. The film ends dramatically with the mass executions at Krasny Bor [where 580 ethnic Finns, over half the total, were shot, tr.].

At Krasny Bor, Katya Klodt organised a protest along the lines of the ceremony in Moscow the previous day: “Restoring the Names”. Those taking part read the names of the dead from the book compiled by her father, Krasny Bor, a Grove Stained Red with Blood(2000). She was helped by volunteers and Karelian journalist Natalya Sevets-Yermolina. Both the journalist’s grandfathers were “dekulakised” as wealthy peasants during the forced collectivisation of agriculture (1929-1933). One was executed — the other died of humiliation.

“He was one of the wealthiest men in the Veps district. They made him drive the sanitation truck and he died of shame at 37. There has been no act of repentance, no word of apology to our family. That mean-spirited word ‘rehabilitation’ has no meaning. And everything is starting up again. I came to this dead place to be among the living — for me the people who lie here are more alive than those I see on television. I wanted to read their names and see who these people were, forced to depart this life for no reason at all.”

Towards the end, guests from Finland and young people also joined in reading the names aloud. On the way back to the road the police accompanied those who had been at the event.

On Sunday the “Restoring the Names” ceremony took place in Moscow. During the day 5,286 people came to Lubyanka Square, and 1,227 of them approached the microphone and read aloud the names of the executed. They also recalled Yury Dmitriev and presidential candidate Ksenia Sobchak spoke in his support.

“Until 1 pm we were still trying to keep track of how many people called for the release of Yury Dmitriev. Then we lost count, but it seems that every sixth speaker called for the head of Memorial in Karelia to be freed,” wrote Memorial.