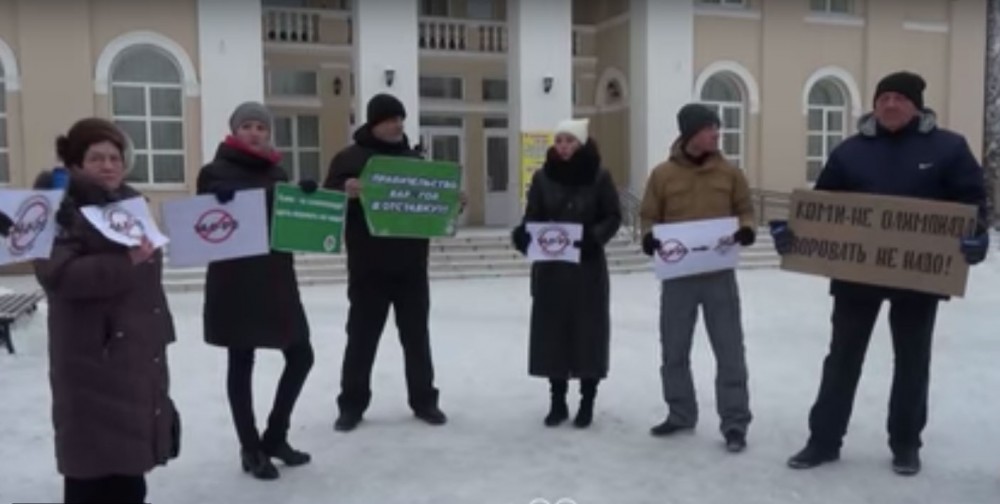 Screenshot from video by 7x7-journal

Picket against actions of Komi authorities

Ten residents of Sosnogorsk, Komi Republic, held a picket, demanding better life in the region and protesting against the latest decisions of the Komi head Sergey Gaplikov. They joined the week of protest, initiated by the Save Pechora environmental group.
By

According to organizer of the picket Andrey Pavin, he applied to the district administration, which, to his surprise, approved it on the first try. The policemen behaved politely during the action. The picket took place on 13th December and was attended by 10 people who prepared posters criticizing the Komi head Sergey Gaplikov. For example, with the texts like “Seryozha, we need to break up”.

“Nothing changes in our region, only public discontent is growing,” Andrey Pavin explained. “People do not have a job, it is difficult to find it after the university. People sit at home, or work in shops for scanty salaries. Now, we have a law No. 144, which deprived us of benefits when paying for kindergartens. Life does not change for the better. Before the election, Gaplikov promised that we would live like in Europe. And it only got worse.”

In early December, 2017, the oldest environmental organization of the republic, the Save Pechora environmental committee, initiated a week of protest in Komi from December 10 to 17. Civil activists believe that authorities of the republic make some decisions without taking into account the interests of the residents. Activists were indignant at the cancellation of the referendum banning the use of old oil pipelines, as well as attempts to make the Komi language in schools optional.

The first rallies were held in the village of Ust-Usa and the village of Novikbozh, Usinsky district, within a week of protests. Ukhta court recognized the response of the local mayor’s office to organizers of the rally, which is scheduled for December 17, illegal. The officials wrote that the raising issues contradict the Russian Constitution.