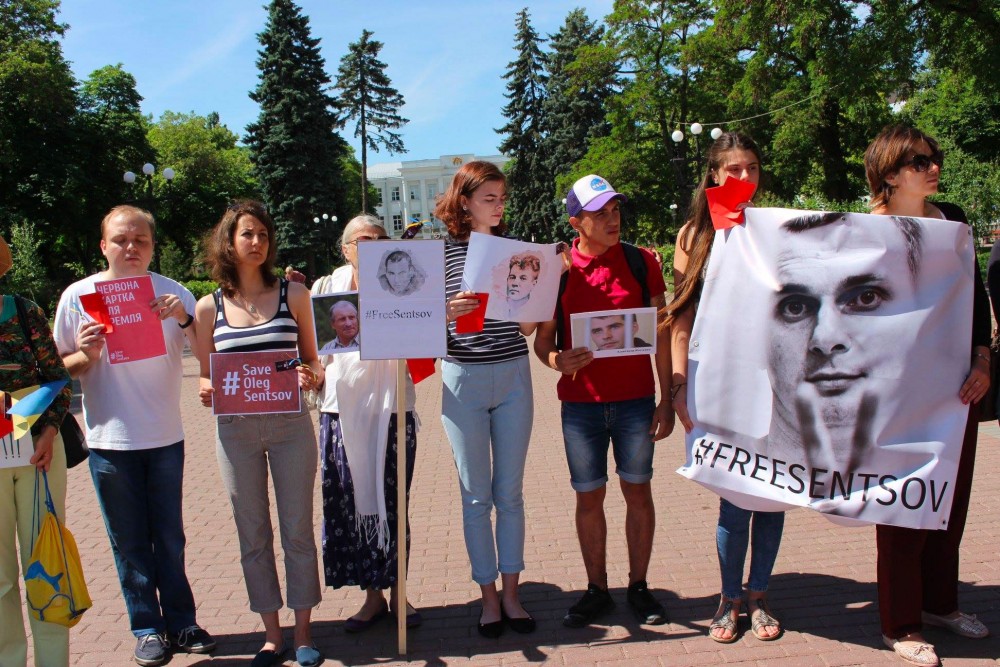 The end is near, says political prisoner Oleg Sentsov

The Ukrainian film director is on hunger strike for 88 days in the remote Russian Arctic prison of Labytnangi.
Read in Russian | Читать по-русски
By

«Strength is fading and the end is near,» says Sentsov, who has been on hunger strike since mid-May. According to his sister, Nataliya Kaplan, the 42-year old man is now hardly able to stand on his feet.

In a Facebook post, Kaplan says that her brother is living in «an information vacuum» and that he receives no letters from outside. Kaplan still has access to Sentsov through his lawyer.

«This is not only bad, it is catastrophically bad», Kaplan says.

The Ukrainian film director, who was sentenced to 20 years of prison after setting fire to the office of political party “United Russia” in the Crimea, went on a hunger strike in the colony in Labytnangi. According to Sentsov’s lawyer Dmitry Dinze, he demands the release of all Ukrainian political prisoners in Russia.

Sentsov’s claim concerns 64 Ukrainian political prisoners, not himself. He went on hunger strike on May 14.

In 2015, the North Caucasian District Military Court found Sentsov guilty of preparing terrorist acts in the Crimea. He was given 20 years of colony, and his colleague Alexander Kolchenko — 10 years. They were accused of setting fire to the doors of the Russian community of Crimea and the window of “United Russia”. According to the investigation, Sentsov and Kolchenko wanted to blow up a monument of Lenin.

In 2017 Sentsov was transferred to the Yamal colony in Labytnangi.

Labytnangi is located in the far northern Yamal Nenets Autonomous Okrug. It has a population of about 22 thousand, many of them are descendants of the Stalin-era prisoners who built the local railway.

A big number of prominent representatives of Russian and European culture, politics and civil society has raised their voiced in support of Oleg Sentsov. Among them is the EU’s High Representative of the Union for Foreign Affairs and Security Policy Frederica Mogherini who in a statement in 2015 said the case «contradicts with basic standards of law» because «Russian judges do not have the right to make verdicts on actions conducted outside the borders of the internationally acknowledged borders of Russia».