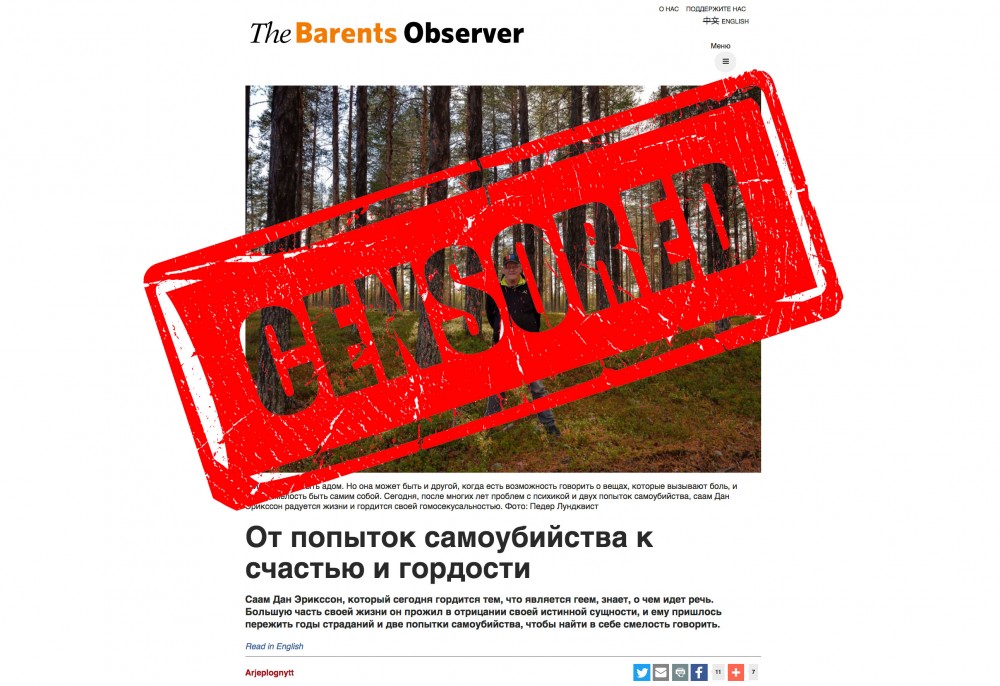 You have 24 hours to un-publish this story. If not, the website will be blocked in Russia, state media watchdog Roskomnadzor makes clear in a letter to the Barents Observer.
Read in Russian | Читать по-русски
By

It is a news article about a Sámi gay man’s long and painful road toward self recognition that has stirred the attention of state media control authority Roskomnadzor.

The story includes violations of Russian law, the authority says in a letter sent to the Barents Observer on 28th January.

The article is originally written by journalist Marianne Hofman and published in Arjeplognytt. It is translated to English and Russian and republished by the Barents Observer. It is the Russian translation of the story that has now caught the interest of Roskomnadzor.

The story is about Dan Eriksson, a Sámi man from Arjeplog, northern Sweden, who for years struggled to overcome taboo and prejudice connected with his homosexuality. He was deeply depressed and twice tried to commit suicide.

It is a story about survival and gay pride. Eriksson today lives happily in Arjeplog and actively travels around to share his experience with other gays, a group that is over-represented in Swedish suicide statistics.

In the letter sent to the Barents Observer, Roskomnadzor says the story is a violation of Russian Federal Law «On Information, Information Technologies and Information Protection».

According to the media controllers, the story includes «data on suicide methods and death claims». Furthermore, it «incites suicide» and «describes ways to commit suicide.»

The story about Dan Eriksson must be unpublished within 24 hours, the letter demands.

«In case the hosting provider and (or) the Internet web-site owner fail to take these measures, the network address enabling to identify Internet web-sites containing the information prohibited for distribution in the Russian Federation will be decided to be entered into the Register and to be limited for access by operators.»

Editor of the Barents Observer, Thomas Nilsen, underlines that he will not comply with the demands from the Russian inspectors.

“It is out of question to unpublish the article,» he makes clear.

«This is an important story to tell.  It is the media’s role to tell stories about people whose voices are suppressed or not recognized. This is a story about a brave man. We are proud to republish the interview by Arjeplognytt.»

It is not the first time that Russian authorities have been trying to encroach on the Barents Observer. The Federal Security Service (FSB) in 2015 tried to get the newspaper closed. And in 2017, Editor Nilsen was put on the Russian so-called stop-list for undesired individuals and rejected entry to the country.

Nilsen underlines that the Barents Observer is an independent media and that it works strictly in line with international recognised standards of the free press.

«Roskomnadzor, FSB, or any other authority be it in Russia or Norway, has absolutely no influence on our editorial freedom,» he says.

The Barents Observer closely cooperates with other free media organisations in northern Scandinavia and Russia. The story about Dan Eriksson is translated and republished as part of Eyes On Barents, a collaborative partnership between news organizations and bloggers in the Barents region.