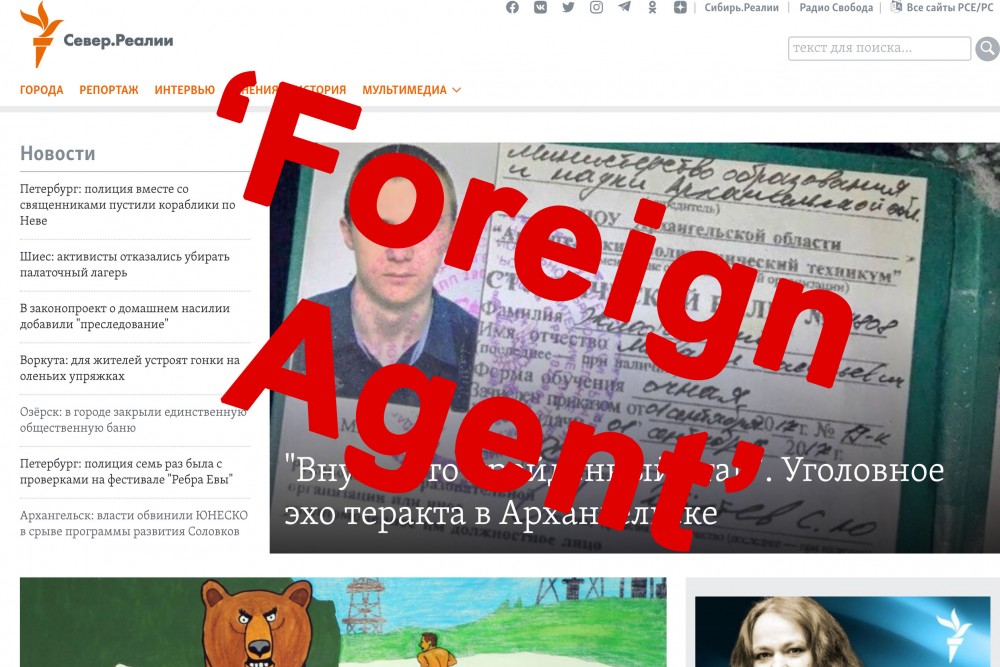 Sever.Realii, a news project created by Radio Liberty, is placed on the list as ‘foreign agent’ by the Justice Ministry one day after State Duma deputies pinpointed the news-site as interfering in Russia’s internal affairs.
Read in Russian | Читать по-русски
By

Sever.Realii was started in September, but it didn’t go long before the news outlet came under the spotlight of authorities.

The State Duma committee established to investigate foreign political interference last week said Sever.Realii was engaged in the justification of extremism and consequently asked for the news site to be included in the registre as a ‘foreign agent’ media.

Head of the committee, Vasily Piskarev, said Sever.Realii «in two months have managed to violate a huge number of our laws.»

According to Piskarev, the news-site has propagated legalization of drugs.

The day after, on November 15, the Justice Ministry included Sever.Realii in the register of foreign media acting as a ‘foreign agent’. The ministry says the decision was made on the basis of the materials received from the State Duma commission.

«It is  an attempt to silence independent media in Russia and deprive Russian audiences of access to information that is not under Kremlin control,» Fly said and underlines that U.S. law guarantees Radio Free Europe’s editorial independence.

«Any suggestions that we or our journalists are agents of any government is false,» he said.

Sever.Realii is a fully owned an operated by Radio Free Europe, funded by the government of the United States.

Researcher on EU-Russia cross-border cooperation and journalist on human rights issues in Russia, Gleb Yarovoy, says to the Barents Observer that the case is a clear sign of censorship.

«All, since it’s another clear sign that the authorities try to keep this vicious circle of censorship to keep the agenda as immaculate as possible. Northing, because it doesn’t negatively affect the perception of the reader, as well as it doesn’t prevent Sever.Realii from accomplishing its mission, which is to report profesionally and independently on what is happening in the north of Russia.»

Yarovoy himself tells it’s personally not necessarily bad being a foreign agent.

«It’s the same story as with the NGOs, the best from the best were labelled ‘foreign agents’. I feel like a ‘foreign agent’ to the current regime, or let’s say to its evil part.»

«Whoever will and capable to report independently can be listed,» he says.

Other media in the spotlight

The registry came after the United States listed Kremlin TV-channel RT as a ‘foreign agent’ in the U.S.

Riga-based Meduza in September reported that other foreign media under watch be the Duma commitee include BBC Russian Service, MBK Media, Deutsche Welle Voice of America, Current Times and Meduza itself.

Chairperson of Barents Press Russia, Anna Kireeva, says to the Barents Observer that no media should be labeled as foreign agents.

«Putting the label ‘foreign agent’ on any media in any country is a worrying practice, as it limits freedom of speech. Journalists should not be foreign agents and label their articles,» Kireeva says and adds: «It’s a humiliating procedure.»

Barents Press is an unformal network of journalists across northernmost regions of Finland, Sweden, Russia and Norway.

… You can help us report about cross-border media-freedom.
For 17 years, the Barents Observer has provided serious, fact-based stories about life and developments in the North. Please help us to strengthen our independent journalism. Get engaged, give a small donation. Thank you!