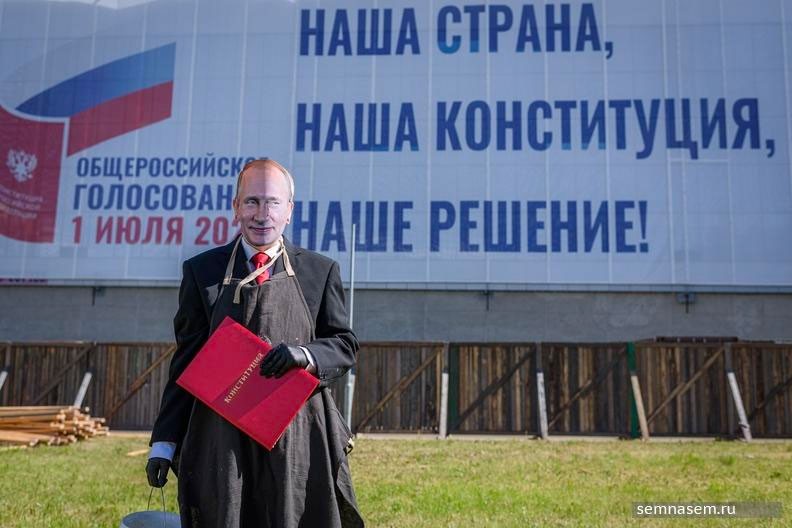 Activists staged a performance on amendments to the Constitution of the Russian Federation in the center of the north Russian city. A man with a Putin mask stained a folder depicting the country’s main document with a white mixture.
Read in Russian | Читать по-русски

The rally was held at the square near the city Central Swimming Pool where a large banner advertising the vote on amendments to the Constitution is on display. A man wearing a mask depicting the Russian President brought with him a folder with the inscription «Constitution» and a bucket of white mixture. He put on a black robe, took out a brush, and made a few sloppy strokes; then he closed the folder and left.

The performance was organized by queerrrriot — an initiative group of LGBT+ and their supporters in Syktyvkar.

“The purpose of the action is to show how stupid the amendments to the Constitution that are going to be submitted are. How hard our «wonderful» president is trying to avoid the negative impact of these amendments on himself,”  said Nina Popugayeva, a member of the Group.

The activists called their rally «Re: last edits.» They say that, in addition to the most important amendment allowing Vladimir Putin to hold office as President of Russia until 2036, there are several other changes that cannot be considered to be positive for civil society. For example, capturing the concept of marriage as a union of a man and woman. Activists are not calling on people to boycott or go to the polls, but they are going to vote against amending the Constitution.

On June 20, 10 people held a series of one-person pickets against amendments to the Constitution at the Theater Square in Syktyvkar. Police officers who came to the square issued notifications on violating «the high-alert mode» to two of them.

This article first appeared in 7x7-journal  and is republished in a sharing partnership with the Barents Observer.