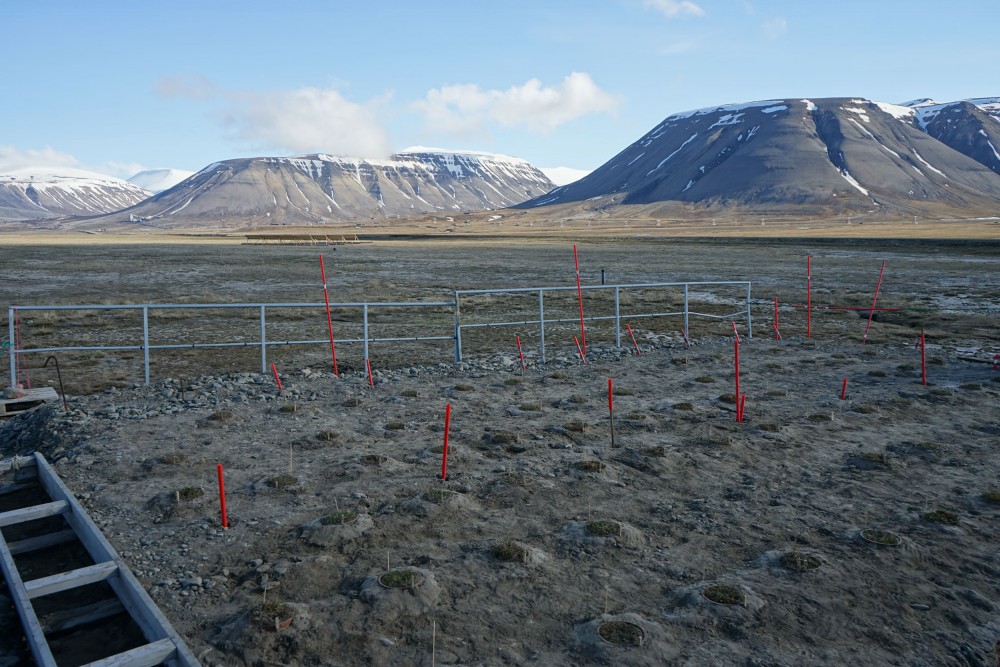 Thawing permafrost is studied at this site in Adventdalen on Svalbard. Photo: Thomas Nilsen

Glaciers are melting, permafrost thaws and buildings are sagging. What scares the scientists most is studies of decomposing carbon from beneath the ground being emitted to the atmosphere as CO2 or methane.
Read in Russian | Читать по-русски
By

These greenhouse gases will then contribute to further climate changes, causing more Arctic permafrost to melt. Such self-reinforcing cycle, called the permafrost carbon feedback, is now studied at several locations at Svalbard.

“When I started studying permafrost in the late 1990s, I didn’t think this was something I was going to experience,” says Ketil Isaksen, Senior Researchers at the Norwegian Meteorological Institute.

“Core samples from Janssonhaugen shows an increase in temperatures of more than 2°C at a depth of 10 meters. Measurements of the temperatures show a steady increase over the last 20 years,” Isaksen tells.

The researchers have made one drilling to 102 meters depth and another 15 meters down in the permafrost.

“This summer has been extreme,” Isaksen says, pointing to the temperatures measured every summer since 1899.

Average temperatures for June, July and August have varied from year. Until about 1990, this variation was typically 0,5 to 1°C with some single years 1,5°C over or under the normal.

In the 1990s, a clear change was observed, and after 1997 the researchers have not registered a single summer with a mean temperature under the normal.

The summers are getting warmer and warmer and 2020 was exceptional.  New all-time high was measured at Longyearbyen airport on July 25 with 21,7°C.

Permafrost at Svalbard has entered the era of megamelt, and together with Russia’s Arctic coast, no other places on the earth warms faster. Also the sea ice in the surrounding Arctic Ocean experiences melting at a rate much faster than previous climate models predicted.

International climate scientists are following developments on Svalbard with scare. Permafrost contains twice as much carbon as the atmosphere, and with thawing permafrost, more and more of the CO2 and methane are emitted as the organic material previously frozen start to decompose.

Releasing of carbon from the permafrost will contribute additionally to warming climate.