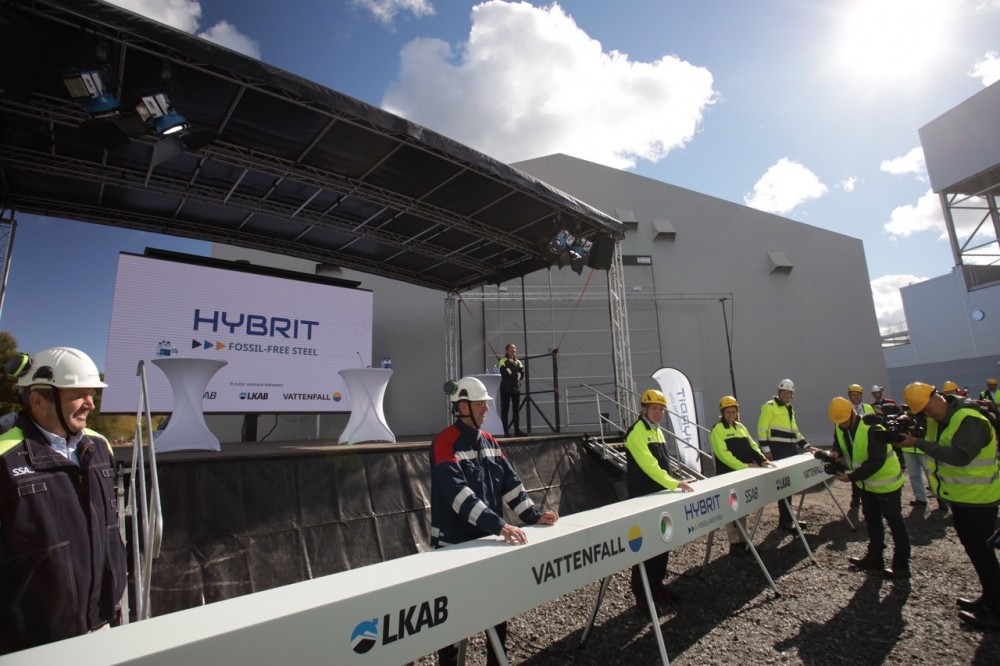 Production of fossil-free sponge iron is first step in the process of decarbonizing steel-industry. Photo: SSAB

The unique pilot plant in Luleå is a first step in decarbonizing the steel industry, which today counts for 7% of global man-made greenhouse gas emissions.
Read in Russian | Читать по-русски
By

“Today, you are laying the foundations that will enable the Swedish steel industry to be entirely fossil- and carbon dioxide-free in 20 years,” said Prime Minister Stefan Löfven, attending the launch of HYBRIT-plant (Hydrogen Breakthrough Ironmaking Technology).

The plant is a jointly owned company formed by the steel manufacturer SSAB, the mining company LKAB and the energy company Vattenfall. All three are based in northern Sweden with the mining, electricity production, and the iron-steel factory.

“Together we can rebuild Sweden as the world’s first fossil-free welfare nation,” Lövfen added.

HYBRIT aims at replacing coking coal, traditionally needed for ore-based steelmaking, with fossil-free electricity and hydrogen. The result will be the world’s first fossil-free steelmaking technology, with virtually no carbon footprint.

“The pilot plant will play a decisive role before we can ramp up the technology for use on an industrial scale. The oxygen in the iron is the great challenge and we need to eliminate it,” said Jan Moström, CEO of LKAB.

The company’s deep-underground mining operations in Kiruna is already testing battery-powered vehicles with a goal to replace all diesel-powered machines by 2030 as previously reported by The Barents Observer.

“We have the chance to revolutionize the entire steel industry and show that net-zero emissions is possible. We must seize this chance,” said Martin Lindqvist, CEO of SSAB.

Following the pilot-plant, SSAB plans for market production by 2026, be full-scale fossil-free by 2045, and by that take advantage of the boost in the global green economy’s demand for climate-friendly products.

HYBRIT’s goal is to reduce Sweden’s CO2 emission by 10% and Finland’s by 7%. In the north,

SSAB has steel production on both the Swedish and Finnish side of the Bothnia Bay.