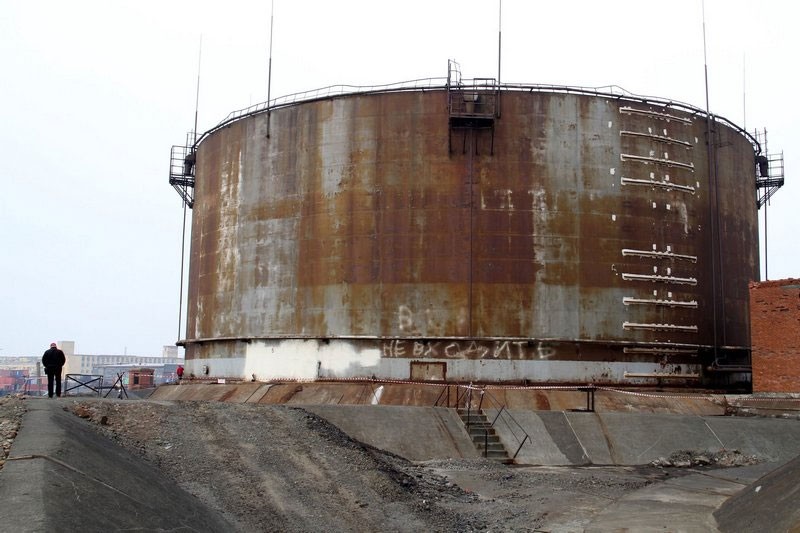 More than 21,000 tons of diesel oil in May and June spilled local waterways from Nornickel's oil reservoir in Taymyr. Photo: Rosprirodnadzor

A report from federal technical inspection authority Rostekhnadzor concludes that construction faults and maintenance negligence were main reasons for the spill of 21,000 tons of diesel oil in the far northern Taymyr tundra.
Read in Russian | Читать по-русски
By

It was on the 29th May this year that the ground gave in and an oil reservoir owned and managed by the Norilsk-Taymyr Energy Company ruptured.

More than 21,000 tons of diesel oil spilled into the surrounding tundra of the far northern Taymyr Peninsula.

It was long believed that the rapid warming and subsequent melting of the permafrost was what triggered the accident. However, the Russian state service Rostekhnadzor concludes otherwise.

It was first of all construction faults and bad maintenance by the owners that resulted in the accident, a new report from the federal authority states.

According to the investigators, the foundation and piles under the reservoir did not have a sufficient bearing strength. There were also several deficiencies made in the construction of the reservoir, and insufficient maintenance had been conducted, Rostekhnadzor informs.

The investigation has been based on visits to site, questioning of local employees, as well as technical documentation and expert analysis, the federal service says.

The conclusions are in line with statements previously made by Dmitry Kobylkin, the former Minister of Natural Resources.

In an interview with state media in late October, Kobylkin underlined that visual investigations have shown that the catastrophe was not related to melting of permafrost.

“Many companies immediately reacted themselves and started to find out what had happened, […] Why this had happened with a reservoir that had been standing for many years, why the crack had appeared. After all, many people linked the accident with the melting of permafrost,” Kobylkin said.

“But what we have visually observed is not related with the permafrost,” he underlined in the interview that is referred to by Izvestia.

The leak took place near the far northern city of Norilsk. It polluted vast areas of lakes, rivers, wetlands and tundra. The cleanup and restoration of the vulnerable environment has been estimated to cost 148 billion rubles (€1,64 billion). That sum, however, is disputed by Nornickel, the mining and metallurgy giant that owns the Norilsk-Taymyr Energy Company.

Nornickel argues that the sum is based on faulty estimates and intends to take the case to court.

Irrespectively of the conclusions over the oil spill in Norilsk, the Russian North is undergoing rapid change and temperatures have risen dramatically over the past decade.

The Russian Arctic is now the part of the world with the quickest warming, and the melting of the permafrost has aggravated. Damage is significant to buildings and housing across the region, and risks are growing for industry and infrastructure.

Across major parts of northern Siberia, including the Taymyr Peninsula, average winter temperatures have over the last decades increased by about five degrees Celsius and the permafrost layer annually shrunk by about 10 cm.