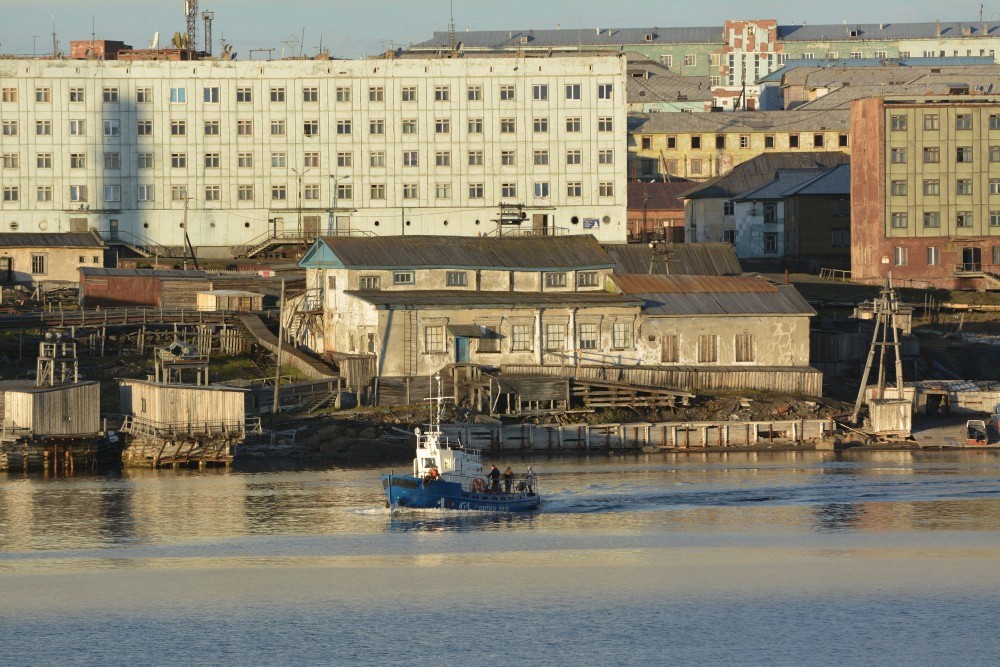 The town of Dikson is located in the far northern Taymyr Peninsula. Photo: Thomas Nilsen

Direct damage on buildings and infrastructure will be up to €99 billion, says Deputy Minister of the Far East and Arctic Aleksandr Krutikov.
Read in Russian | Читать по-русски
By

Unprecedented warming in the far north is having its toll on Russian towns, industry and infrastructure, and consequences could be dire unless the temperature increase is halted, the Russian Ministry of the Far East and Arctic makes clear.

According to Deputy Minister Krutikov, the direct damage inflicted on installations in the region could amount to 9 trillion rubles (€99 billion).

“The most optimistic prognosis, with marginal warming, is 2 trillion rubles by 2050, while the most extreme damage, if the intensity of the warming increases, will  amount to 9 trillion by 2050,”  he said in a recent meeting in the Russian Federation Council.

The estimates are based on expected damage on buildings and infrastructure, he explained and underlined that the numbers are provided by researchers.

Krutikov and the Ministry of the Far East and Arctic is currently in the process of elaborating a federal plan on Arctic climate change adaptation. A group of 36 leading researchers in the field is are involved in the work and the plan is to be presented in the course of December, TASS reports.

The Ministry of the Far East and Arctic is also involved in the making of a state environmental monitoring system for the Arctic. The plan is requested as part of Russia’s new Arctic Strategy, a document adopted in late October this year.

Deputy Minister Krutikov underlines there is a need for many more monitoring stations across the Arctic. Russia currently has a total of 430 hydrological units in the region.

The Russian part of the Arctic is the part of the planet with the most dramatic warming. Over the last decades, the average temperature has increased by more than five degrees Celcius.

According to Russian meteorological service Roshydromet, it is the Kara Sea and nearby areas of Taymyr and Yamal that now is the region with the quickest warming.

The higher temperatures have grave effects on the permafrost that is melting rapidly across the region.

The year 2020 has beaten most temperature records. Since measurements started in year 1881, summer temperatures in the Arctic have never been this high. The record temperatures continued into fall.

It has been the northern parts of the Taymyr Peninsula that this year have experienced the biggest temperature deviation. Maps presented by Roshydromet show that the areas adjacent to Dikson, the local town in Taymyr, in summer were more than five degrees warmer than normal.