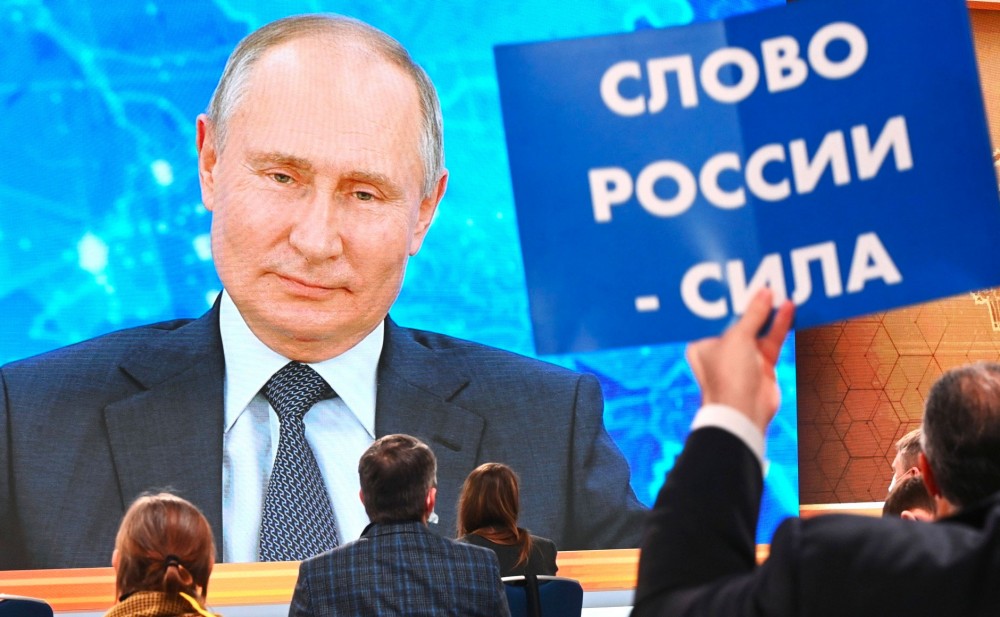 "Russia's word is Strength," this poster from one of the journalists in Putin's annual press conference reads. Photo: kremlin.ru

The President did not get any questions about the vast region of such major importance for the country.
Read in Russian | Читать по-русски
By

Vladimir Putin on Thursday kept on going in what appeared to be an endless media show. This year, the press conference was partly digital with journalists asking their questions from several regional audiences around the country. Only few were sharing room with the President in his Novo-Ogaryevo residence near Moscow.

Several hundred journalists took part, and more than 50 of them got the chance to directly ask the President. The event lasted for almost five hours.

However, despite the Kremlin’s current major emphasis of the Arctic, the President did not get a single question about developments in the vast northern region. Likewise, despite the looming threats against national security now coming from climate change, none of the journalists even touched on the issue.

As a matter of fact, hardly any of the questions at all focused on the state of affairs in the northern parts of the country, nor did journalists from the North get any chance to raise questions. The exception was a comment on the state of healthcare in Alakurtti, the small military town in the Kola Peninsula.

Instead, this year’s annual press conference had a high focus on healthcare, the coronavirus and relations with the West.

Putin indirectly made clear he bears no responsibility for the worsening relations with the West, saying that “compared to you [the West], we are warm and cuddly.”

“We heard you say NATO won’t expand east. But you did. NATO is approaching our borders. We’re not supposed to respond?,” he responded to a question from the BBC’s Steve Rosenberg.

He also tried to convince the audience that Russia has a modest defense budget compared with other powers, but at the same time bragged about his country’s development of new weapons, including the Poseidon underwater drone, hypersonic missile Kinzhal, laser weapon Peresvet and nuclear-engined missile Burevestnik.

Putin also commented on the situation with Aleksey Navalny, although he continues to refuse to mention his name. According to the President, the opposition political is an instrument supported and used by U.S. intelligence.

“As for the patient at the Berlin hospital, this patient is supported by the U.S. special services.”