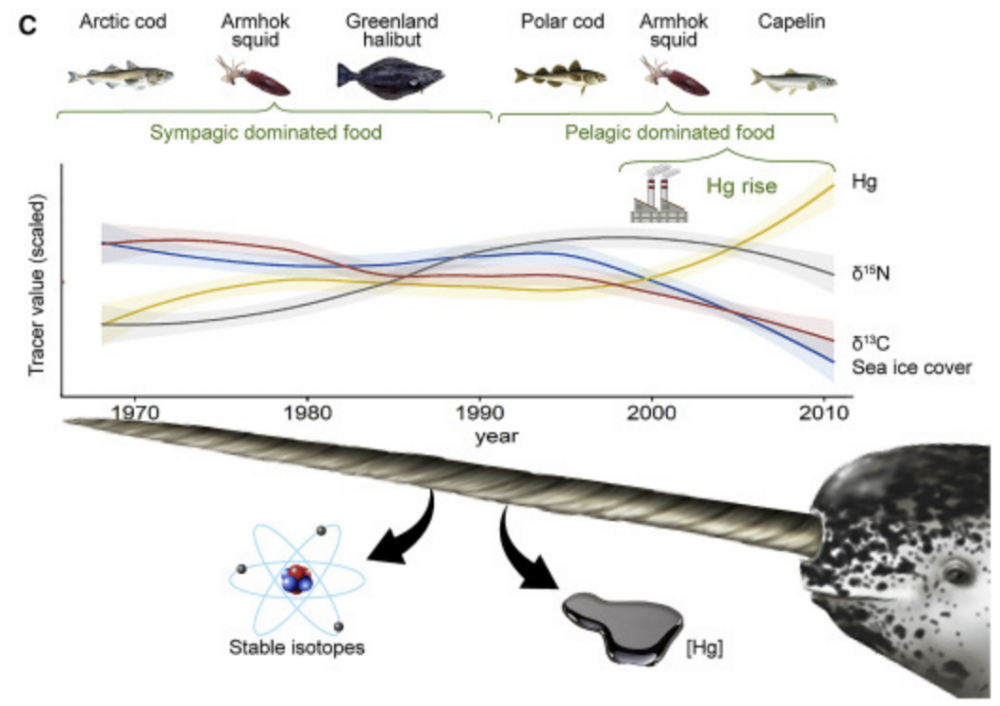 Current Biology’s analysis indicated that around the 1990s, the narwhal’s diets changed from mainly consisting of large fish, whose habitat tend to be ice-covered waters, to smaller fish, who thrive best in the open ocean. This change is parallel to vast drop in sea ice cover since the 1990s.

Apart for emphasizing the terrifyingly quick effects of global warming, the study also highlights long-term health issues narwhals might face in light of ice sheets melting. Smaller fish tend to have a lower fat content, which makes them less caloric and nutritious and makes it harder for narwhals to create insulating blubber for themselves.

Current Biology also analyzed changing mercury levels throughout the narwhal’s lives. Between 1962 and 2000 mercury levels increased by an average of 0.3% per year. However, from 2000-2010 mercury level suddenly rose to a 1.9% increase per year.

Smaller fish typically contain less mercury than larger predators, meaning that mercury levels should not have increased in narwhals once they changed their diet from larger to smaller fish in the 90s. However, because mercury levels in narwhals increased nonetheless, the increase was not caused by a change in diet. This incongruency in the narwhals’ diet and mercury levels indicate a much more terrifying truth: there is an overall increase of mercury entering the Arctic marine ecosystem.

The explanation for such a drastic increase in mercury levels in the Arctic region lies in the long-distance wind streams which transport mercury from other parts of the world into the Arctic. Mercury does not only pose a grand threat to animals, it is extremely dangerous for humans too. Exposure to mercury can lead to a variety of health problems, including alterations of the nervous system as well as brain damage.

As more studies emerge regarding the effects of human behavior on the environment, it becomes all the more apparent that climate change is entering the point of no return.