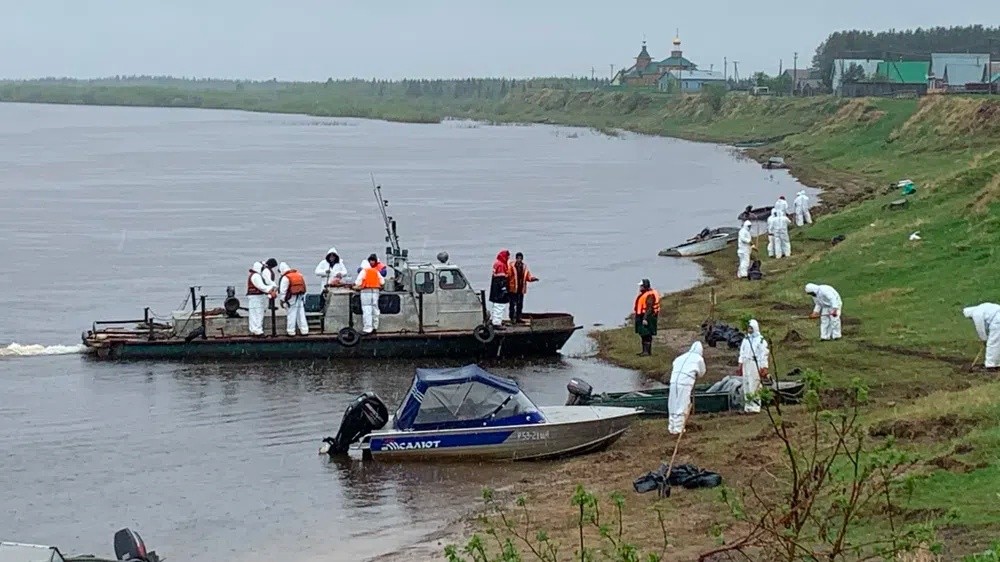 Cleanup personnel have managed to remove only parts of the oil that spilled into local rivers in May. Photo: Tatiana Britskaya, Novaya Gazeta

Instead of cleaning the shores of the Pechora, oil workers are laundering their reputations

Talking to Russia 24 TV reporters at the St. Petersburg International Economic Forum (SPIEF), LUKOIL President Vagit Alekperov said that the natural ecosystem in Komi has been fully restored after the oil spill.

“The ecosystem has already been restored to health because we have taken all comprehensive measures.”

Alekperov added that in order to avoid future disasters, the company “was conducting full examinations of the entire oil field economy and all oil storage facilities.”

The businessman’s words about such a quick cleanup of the May spill on the Kolva River caused bewilderment. At least 100 tons of crude oil spilled out of the emergency collector. Not only were journalists surprised but the supervisory authorities were as well. After hearing about Alekperov’s statement at the SPIEF meeting, Svetlana Radionova, the head of Rosprirodnadzor, the Federal Service for Supervision of Natural Resources, immediately denied it harshly.

“We have not even finished eliminating the consequences. What can be restored there? Have they raked out all the oil in the soil? They have destroyed the river. Do you think it has already been restored? No, of course not,” Radionova added that the estimate of the damage caused by the oil spill exceeds 300 million rubles but the true numbers have not as yet been clarified.

Residents of the Komi Republic’s Usinsky District, who have been observing the consequences of the spill for more than 20 days, are also at a loss. The active collection of the oil spilled into the river is still underway and evidence of the spill is still visible everywhere along the shores.

Additionally, Ivan Ivanov, chairman of the local Committee for the Rescue of Pechora environmental organization believes that Alekperov’s representation of the situation is very vague. “The oligarch’s words are unclear. From his words, you could think that Vagit Yusufovich knows nothing about oil at all. Which ecosystem does he mean? Is he talking about the ecosystem of a particular swamp? A stream? A river? Of course, it is probably unnecessary for him to talk about any responsibilities for eliminating the consequences for the entire region.”

The ecologist notes that lately, the only real cleanup has been the complete liquidation of criticism of LUKOIL in the media and public discussion.

“Advertising contracts with the media have been leveraged. They have started buying up entire newspaper runs where there have been any criticizing of the company. We have become familiar with this tactic. In addition, they are now actively working on people involved in the response to the spill. Workers are forbidden to talk about what they see or to take any pictures. Everyone has become afraid of getting phone calls. And all this means is that they are more concerned with information leaks that they are with the oil leak.”

“Workers are forbidden to talk about what they see or to take any pictures.

Ivanov admits that it is possible that Alekperov was misled about what was happening. It is difficult to find another reasonable explanation for his words. Dropping so much oil in the river will have irreversible consequences. This is the position of scientists. Any process of restoring the river after such a large spill will take decades. And this is providing that the oil is actually cleaned up and that the negative man-made impact on the water stops completely.

And in this case, we need to remember that an independent laboratory found that the permissible concentration of oil products in the Kolva river is now 500 times higher than any permissible health standard.

Ivan is also outraged by the fact that the local population never gets mentioned in any way when company representatives talk about the post accident clean-up. There have never been any mentions of compensation for the people who have lived by the river for generations. This spill has cost them their entire way of life. They can no longer fish or have any access to clean quality drinking water.

And in the opinion of this reporter, this statement from the head of LUKOIL about doing any real examinations of the company or of the entire oil industry in order to avoid future accidents is also surprising. In the Usinsk region, some of the oil pipelines are 7000 km long. Despite any partial replacements or maintenance, spills occur almost every year. True, not all of them are as large as the Kolva spill but there are hundreds of them. And literally, only a few days after the spill in Kolva, another incident happened when a griffin, a geyser of rock, water and oil shot out of the ground in another LUKOIL project 20 km from the city of Usinsk in Komi on May 11.

Between life and oil

At the feeding trough in a uniform