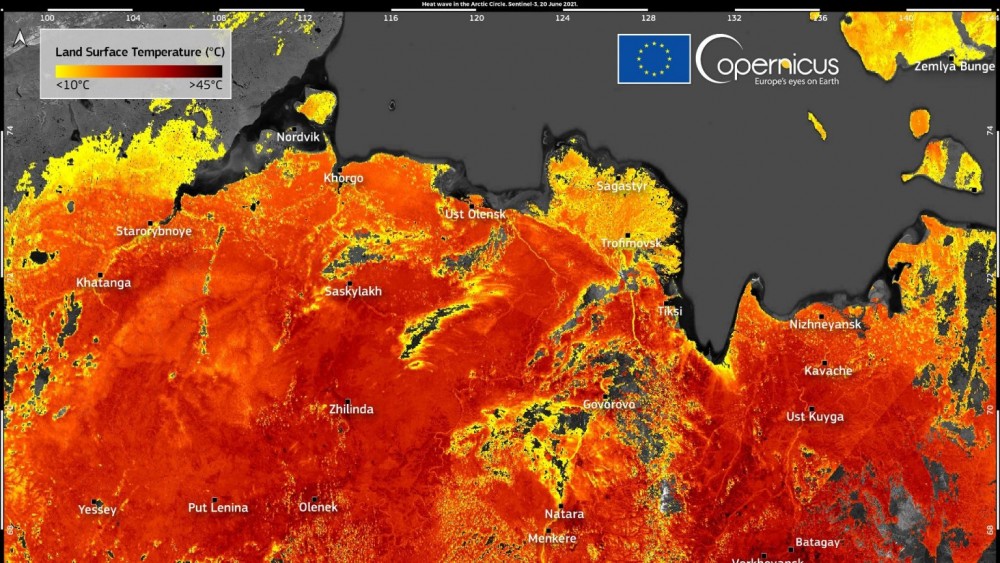 In Saskylah, a small community in the Arctic Circle, the air temperature reached 31.9 C on Sunday, the highest record since 1936. Image: European Union, Copernicus Sentinel-3

Sunday saw a slew of record-breaking temperatures in Arctic Russia, as a persistent heatwave continues to sweep Siberia, especially in the Sakha Republic (Yakutia).
Read in Russian | Читать по-русски

The temperatures were among the data published on Monday by Copernicus, the European Union’s Earth observation program.

The readings, taken from the Copernicus Sentinel-3A and Sentinel-3B satellites, showed the land surface temperature in Siberia was above 35 C.

A peak of 48 C was recorded near the town of Verkhojansk, located in the Sakha Republic (Yakutia).

The hot, dry weather is an increasing concern in Yakutia where 64 forest fires were active as of Tuesday, said the regional government in a news release.

Although the fires are currently not threatening any communities or infrastructure, regional governor Aisen Nikolaev said the current climate was a key factor leading to the rapid increase in the number of fires.

In the update, the government said 1,586 people and 139 pieces of equipment were currently being used to fight the blazes.

The government said the current heatwave was “abnormally hot weather” and was expected to last until the end of June.