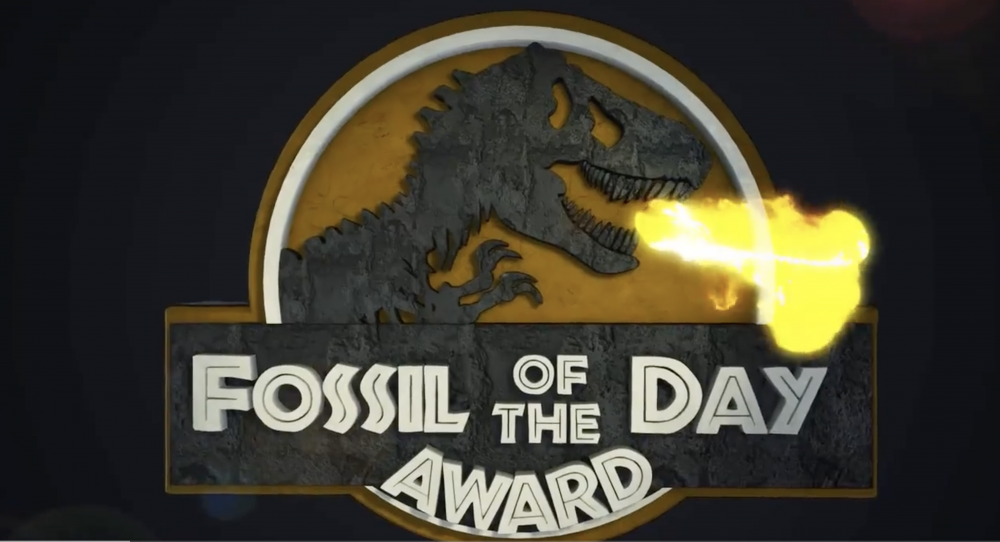 The sarcastic Fossil of the Day Award is organized by the international Climate Action Network (CAN) and is handed out to those who are “doing the most to achieve the least”.
Read in Russian | Читать по-русски
By

The Climate Action Network writes that Norway is given the award “for new prime minister Jonas Gahr Store being a fossil fuel cheerleader by promoting Norwegian gas and carbon capture and storage (CCS), and failing to meet its climate targets.”

The award is announced daily at COP26 to countries who are “doing the most to achieve the least”. The sarcastic prize to negotiating parties on climate conferences since 1999. The Climate Action Network represents more than 1,500 civil society organizations around the world.

CAN explains why Norway got the award: “Norway likes to play the climate champion but behind closed doors, new prime minister Jonas Gahr Støre is gaining a reputation as a fossil fuel cheerleader. The Labour leader, who’s only been in charge for a few weeks, has, apparently, boasted to media that “Norwegian gas is not the problem, but part of the solution for a successful transition to renewable energy” especially if combined with carbon capture and storage (CCS).”

Norway is the third-largest exporter of natural gas in the world, only behind Russia and Qatar. After Russia, Norway is the biggest provider of gas to Europe, supplying 20 to 25 percent of the EU gas demand.

On Tuesday in Glasgow, the Norwegian prime minister got three minutes on stage to deliver his remarks in front of world leaders gathered for COP26 climate summit. Jonas Gahr Støre stated that Norway comes to Glasgow with one overriding ambition; helping keep the 1.5-degree target alive.

“This is existential. It is urgent. And it is possible - if we jointly step up our commitments.”

However, the newly elected prime minister from the Labor party failed to mention his country’s hunger for oil and gas drilling. In fact, Jonas Gahr Støre didn’t mention oil and gas one single time in his speech.

However, in an interview with the Financial Times ahead of the Glasgow climate summit, Støre warned that drilling shutdown would scupper the transition to greener industries such as renewable energy.

“If we were to say from one day to the other that we close down production from the Norwegian shelf, I believe that would put a stop to an industrial transition that is needed to succeed in the momentum towards net zero… So we are about to develop and transit, not close down,” the prime minister said.

Jonas Gahr Støre also takes a clear stand against the European Commission’s suggestion to ban all petroleum activity in the Arctic, including the northernmost part of the Norwegian Sea and the Barents Sea.

“Resolutions coming out of continental Europe saying that everything north of the Polar Circle should arbitrarily be stopped, it doesn’t work like that,” the prime minister made clear in his interview with the Financial Times.

This summer, the Norwegian government announced a new licensing round on its continental shelf, inviting oil companies to apply for any of the 84 blocks made available. 70 of the 84 blocks are in the country’s northernmost waters, the Barents Sea.

In his speech on Tuesday, prime minister Støre said it will be a priority for the government to work with business, industry and the social partners to help succeed the transition towards a renewable, circular and sustainable future.

“This transition will make a difference in Norway. But our ambition goes further: We aim to develop and export new technology that can be of use beyond our borders,” Støre made clear. He continued:

“Norway is positioned to take a lead in developing ocean-based solutions such as offshore wind; green shipping; carbon capture, utilisation and storage; hydrogen, and electric mobility.”

If the new prime minister delivers on his promises remains to see. The Climate Action Network, though, points to Norway’s historical records: