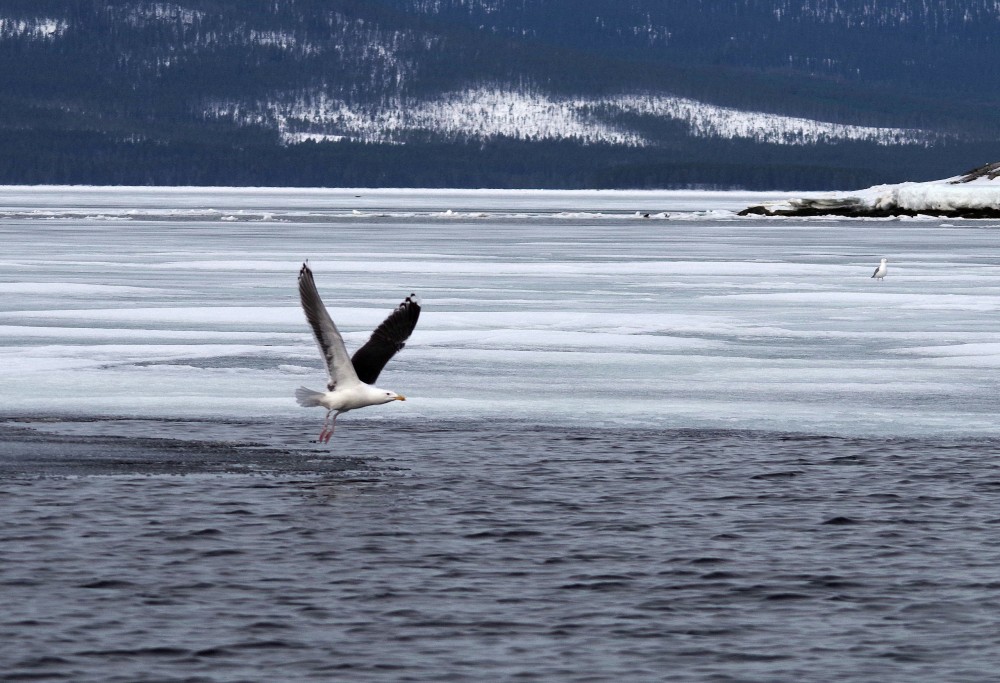 Waterfowls arrived to the White Sea before the ice was gone this spring. Photo: Kandalaksha Nature Reserve

Waterfowls migrated to the Arctic earlier than normal

In the White Sea south of the Murmansk region, the first waterfowls sightings were noticed ahead of time earlier this spring.
Read in Russian | Читать по-русски
By

Waterfowls have been sighted flying off the coast of the Kandalaksha Bay despite the fact that the region was still experiencing a long Arctic winter.

Predominantly eiders, great cormorants and great sea gulls are amongst the typical Arctic waterfowls which return to this Arctic region upon summer in an annual process called abmigration. These birds are now residing in their typical nesting spots in the Kandalaksha Reserve. However, as noted on the Kandalaksha Nature Reserve’s social media site, the waterfowl’s return was earlier than usual.

The explanation of these odd migration schedules might lie in climate change. The relatively cool region of the Arctic is often used for nesting purposes amongst waterfowl birds during the summer. Typically, waterfowl will spend approximately three months of the year in the Arctic while nesting. During the colder months of the year, the waterfowl typically migrates to spend in northwestern Europe.

Rising temperatures during spring times signal that nesting season is around the corner. This is when Arctic waterfowl birds embark upon an approximate 2000-kilometer route back to the Arctic to reproduce and raise offsprings in their early stages of life.

With climate change well underway, the higher overall temperatures in the Arctic will also prompt earlier snow-melting in the spring as well as delayed frost-onset during the autumn. Considering that temperature change is one of the main indicators for migration time for waterfowls, climate change might be the onset off the waterfowls’ abnormal migration patterns.

Some scientists have already observed that warmer temperatures have prompted arctic bird species to migrate to the north earlier than anticipated. One study analyzing altering migration patterns of eagles in the Arctic from 1991 to 2019 has found that “on average, migration started about half a day earlier each year – a change that compounded over 25 years to cause a shift of nearly two weeks”.

Although the study was conducted on non-waterfowl birds, it could be part of a greater trend in which Arctic birds’ migration patterns shift further back as temperatures globally rise. This would certainly to an extent explain the surprisingly early sightings of the waterfowl birds in the Murmansk region.

However, altered migration patterns are debatably not the most dangerous changes the birds have to face as a cause of climate change. Higher temperatures are expected to thaw the Arctic tundra with estimates claiming that up to 57% of the biome will vanish by the end of the century.

Vegetation in their usual nesting areas stands in the risk of severely altering in the coming years as a cause of the rapidly changing landscape. To deal with non-conducive changes in vegetation and the environment as well as the unusually warm climate, various nesting communities are likely to migrate further and further north in search for cooler temperatures and food supply. However, this brings two lethal challenges for waterfowls.

As arrays of the birds are due to conglomerate in increasingly smaller colder areas in the artic, competition for local resources is likely to increase. Additionally, the new species migrating further northwards might import new diseases and parasites which can lethally threaten indigenous species. Both factors could lead to the rapid decrease, or even potential extinction, of certain bird species in the Arctic.

So, what is currently an odd, out-of-place sighting of waterfowl birds in the Kandalaksha Nature Reserve can be a small detail in a much larger and dangerous trend.