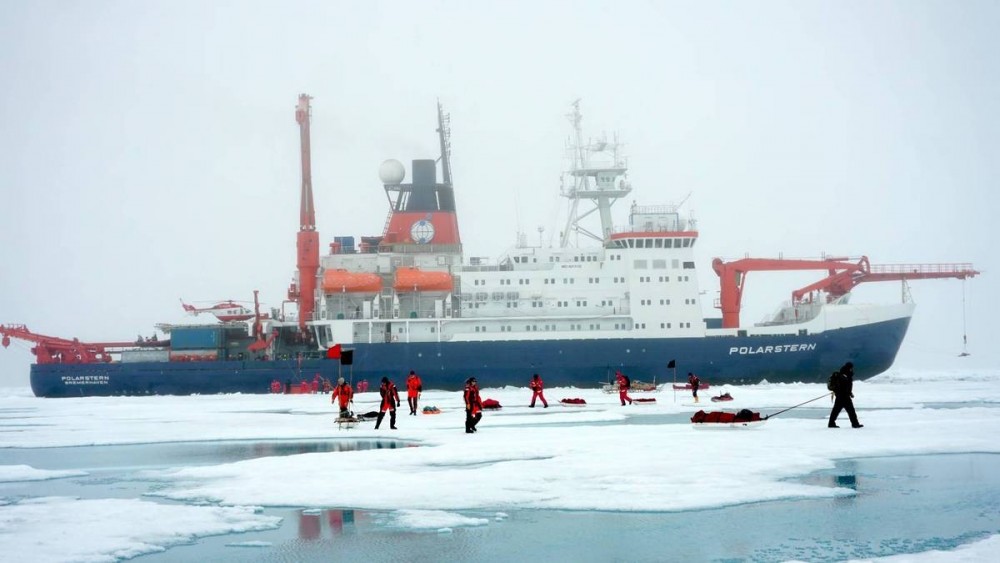 Scientists on the Polarstern enter an ice floe in the marginal ice zone in the north of Spitsbergen. Photo: Vera Schlindwein/Alfred Wegener Institute

Scientists on the German icebreaker Polarstern returned from a seven-week research trip this month, before the boat heads to the Antarctic at the end of the month.
Read in Russian | Читать по-русски

The goal of the trip was to better understand how ice conditions, water layering and fluxes in heat influence melt, and how climate change is impacting the Arctic. The focus was on the marginal ice zone, the area between open water and sea ice edge, north of Svalbard, the Norwegian Arctic archipelago.

The researchers had left in June, at the beginning of the annual sea-ice melt.

“One of the greatest successes while taking measurements in the ice zone was the first-ever deployment of the TOP-AWI sensor platform below the sea ice, which allowed us to document the interplay of sea-ice cover, ocean stratification, nutrient and plankton distribution at unprecedented resolution,” Torsten Kanzow, expedition leader and a physical oceanographer at the Alfred Wegener Institute, Helmholtz Centre for Polar and Marine Research, said in a news release.

Ice buoys were also used in the marginal ice zone to better understand changes to the ice floes.

“It was impressive to see how, at one station, the swell from the open ocean came in, and how the floe we were working on moved in time with the waves, and ultimately broke into pieces beneath our feet,” Kanzow said.

“Later, from the ship we could see that the sea ice floe over a wide range of our working area had suffered the same fate. We posit that the erosion of sea ice in the marginal ice zone, produced by the swell, has a major effect on ice melting, and on the ecosystem connected to the sea ice.”

In the late portion of the trip, researchers travelled to Greenland.

They first went to northeast Greenland to examine how Atlantic water circulation was affecting glaciers in the region, but were hampered by weather conditions.

“The combination of a stable barrier of fast ice off the coast and permanent fog made taking measurements near the glaciers impossible – both from the ship and by helicopter – the teams still succeeded in characterising the oceanic inflow of warm water,” the Alfred Wegener Institute said in a news release.

The last leg of the trip saw the Polarstern head to Scoresby Sound, a fjord system, in eastern Greenland, so researchers could collect observatories that have been collecting data from the bottom of the fjord system for four years.

Maps, photos and other information related to the Polarstern’s voyages can be seen at the Follow-Polarstern link on the Alfred Wegener Institute website.