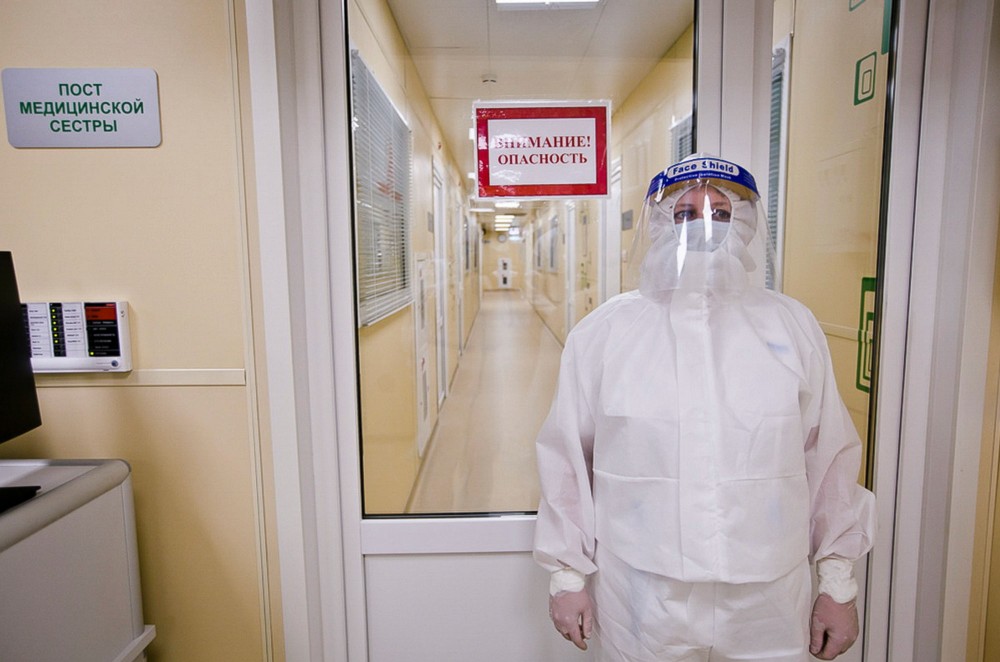 Medics in hospitals across Russia voiced frustration that authorities failed to use the summer respite to prepare for a second coronavirus wave.
Read in Russian | Читать по-русски

In a video widely shared across Russian social media last week, dozens of bodies wrapped in black plastic bags line the walls of a decrepit basement in a hospital in Barnaul, the capital city of the Altai region in Siberia.

“The deceased Covid-19 patients were being stored in the basement of the hospital due to a shortage of pathologists and an increase of coronavirus infections and deaths,” the region’s Health Ministry said in a statement on Thursday, confirming the authenticity of the disturbing footage.

Russia’s health watchdog Rospotrebnadzor on Saturday sounded a further alarm, saying the region is approaching an “Italian Scenario,” a reference to Northern Italy, one of the world’s worst-hit areas by the coronavirus.

The Altai region — like many other Russian regions — is seeing a record surge in Covid-19 cases and deaths as the country faces a second wave of the coronavirus. In contrast to the first wave, less than 30% of all coronavirus cases are in Moscow, and the capital has so far managed to avoid the shortage of hospital staff and beds it experiences for a short period during the spring of this year, two doctors working in hospitals in the city told The Moscow Times.

They pointed to the fact that Moscow authorities recently reserved five big hospitals across the city for Covid-19 patients, easing pressure on the others.

“We are not overwhelmed. There is a lot work but things are going steady,” said Alexander Kupurin, a doctor at Moscow’s Kommunarka hospital

The situation in the regions is very different, according to Vasily Vlassov, an epidemiologist at the Higher School of Economics in Moscow.

Vlassov said that while the surge of infections can be partly explained by improved testing, there is an “undeniable” increase in numbers of sickness across Russia.

“And as is usually the case, the regions don’t have the same resources as Moscow and St. Petersburg. And they never really had a break from the virus in the summer.”

Vlassov believes the country is now paying the price for the government’s abrupt end to quarantine in May and the subsequent rhetoric that “downplayed” the risk from the virus.

In May, Russia mostly lifted its quarantine, all but declaring victory over Covid-19. Critics have argued that restrictions were eased to boost the public mood ahead of two important political events that had been rescheduled because of the pandemic — a historic referendum on constitutional changes that allowed President Vladimir Putin to run for further terms in office and Moscow’s Victory Day parade to mark 75 years since the end of World War II.

“People were told every day that the virus is defeated and that life is back to normal. Slowly but surely it crept back in. This time, the virus has a wider reach across all ages and social classes,” Vlassov said, adding that while Russians were afraid of the virus in spring, now it is harder to urge them to take precautions.

Medics working in hospitals across Russia’s regions described severe shortages of hospital beds and medical staff. Many voiced their frustration that mistakes made during the first crisis in spring were being repeated, and that authorities had failed to use the summer respite to adequately prepare.

“We knew it was coming, yet we were caught off guard anyway,” said Alexei, a surgeon working at the Infectious Disease Hospital in Elista, the capital of the republic of Kalmykia. He declined to give his surname.

Kalmykia, an impoverished Buddhist region near the Caspian Sea, currently has the highest rate of infections per capita in Russia.

Alexei said the hospital doesn’t have enough beds and is being forced to turn away patients who are not yet critical. A study by the Kommersant newspaper found that the Novosibirsk and Altai regions are also running out of beds for Covid-19 patients.

As was the case during the first wave, hospitals have also been forced to enforce quarantine or close, as medics lacking proper personal protective equipment have contracted the virus.

On Oct. 20, medical staff at the four hospitals treating Covid-19 patients in the Urals region of Kurgan sent a letter to Vladimir Putin asking for Russian military doctors to be sent to the region “or else people will begin to die in our streets.”

“We’re in hell…A huge uncontrolled epidemic is in our region,” the letter, seen by BBC Russia said.

In the letter, the doctors said the local healthcare system has “collapsed” and that they don’t have enough medical staff as many have fallen sick.

In other regions, overworked medical workers have been quitting en masse, with some saying they did not receive the promised financial bonuses for treating virus patients.

At the Central Clinical Hospital in Yekaterinburg, Russia’s fourth-largest city, around 80 employees have quit since the start of the coronavirus crisis, Novaya Gazeta reported.

“Doctors are worried that what happened in Dagestan will happen here” said Natalia, a nurse at the Ust-Kansky regional hospital, a rural Altai city with about 15,000 inhabitants.

“We are barely protected.”

The southern republic of Dagestan was one of the hardest-hit regions by the coronavirus in May and at least 40 doctors there were confirmed to have died of Covid-19.

However, it is not just regional cities that are being hit harder than Moscow this time around. The smaller towns and villages that were shielded from the virus last time due to their rural locations are also now reporting more coronavirus cases, according to local media.

“This is the logical next step of the virus, which we have seen in previous pandemics. First it hits the big cities, then it trickles down to smaller communities,” Vlassov said.

While Russia’s official death count of 26,269 places it 43rd on the global list of deaths per capita, Russian and Western demographers have cast doubt on these numbers.

Russia’s coronavirus statistics have come under scrutiny since the beginning of the outbreak when officials declared robust testing as the reason for the country’s curiously low death rate. However, it soon became clear that the country’s methodology — Russia only adds the deaths of coronavirus-positive patients to its total if pathologists say the virus played a direct role — could explain the low death rate.

Recent monthly statistics published by Russia’s state statistics agency Rosstat put the real number of coronavirus deaths at 45,663 between April and August, the latest available month, with a mortality rate of 4.6% against the global rate of 3-4%.

In a July survey, 74% of Russian doctors said they didn’t trust the official statistics.

Mounting anecdotal evidence coming from the regions suggests the death count is also being massaged during the second wave.

In the week when the footage of the bodies in the Altai hospital was circulating, officials only reported 27 Covid-19 deaths for the whole region.

Elsewhere, in the southern city of Rostov, local media reported that 13 coronavirus patients died in a hospital on Oct. 12  after their oxygen supply ran out. While local officials were quick to say the patients had not died because of any medical errors, they admitted that 13 patients had died from the virus in the hospital on that day. The entire Rostov region officially reported only 9 coronavirus deaths on Oct. 12.

Despite the surging infections, Russia has so far shown little appetite for reintroducing full lockdown or other quarantine measures.

“Regarding complex total restrictive measures: we do not plan to do this, and the government has no plans to do this,” Putin said last Wednesday.

In Moscow, bars and restaurants are heaving as a result of what many have described as “pandemic fatigue” after the city was put on prolonged lockdown in the spring. Hundreds of thousands of Moscow’s small businesses have also said they are unable to comply with Mayor Sergei Sobyanin’s restrictions ordering the capital’s employers to ensure that at least 30% of their staff are working remotely.

In tune with the mood of the city, Putin’s spokesman Dmitry Peskov celebrated his 53rd birthday last week with an indoor party where the country’s political and cultural elite were pictured singing and dancing without taking any visible precautions against the virus.

As Russia is unwilling to go into a lockdown, officials expect infections to remain high across the country until February, when the country is hoping to roll out its mass vaccination program.

Until then, Alexei, the doctor in Kalmykia, expects his region to be in for a “very rough ride.”

When asked about the footage of Peskov’s birthday party, he sighed.

“They are dancing while we are the ones who have to work and fight.”