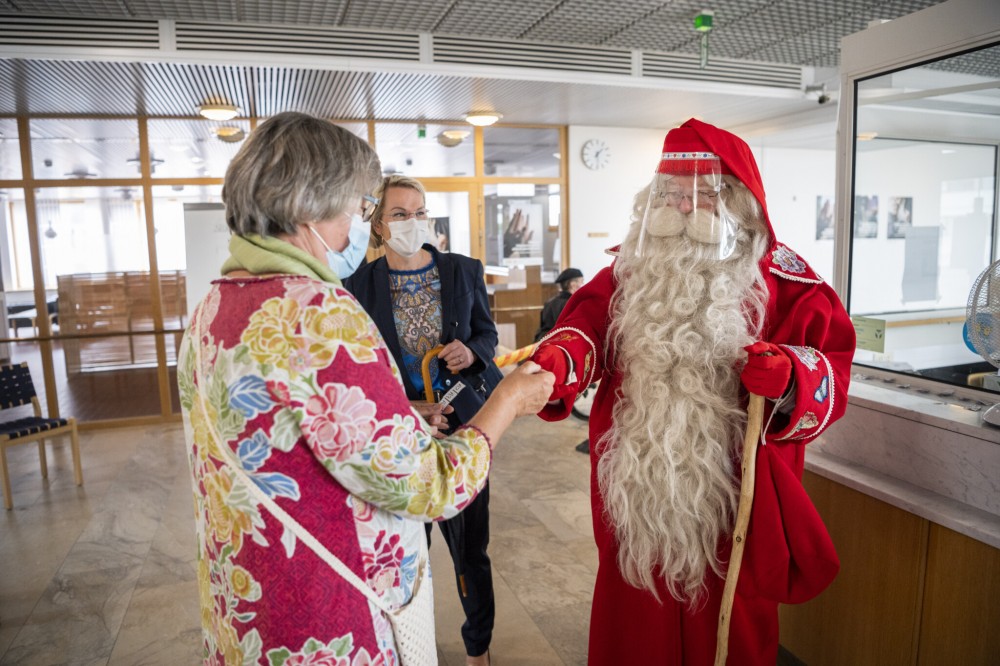 The last 7-day average number of new infections in Finland is 632. Up north, travelers from Lapland who are not fully vaccinated are now subject to quarantine upon crossing the border to Norway.
Read in Russian | Читать по-русски
By

“I have already received my full vaccine series, thanks to my old age, I was one of the first to receive the vaccine,” Santa Claus said when visiting the health authorities vaccination centre in the Rovaniemi Town Hall on Sunday,  the local tourism promotion portal reports.

For tourism, Santa Claus is Rovaniemi’s most famed character.

“We will certainly meet this Christmas, if not face-to-face, it is also possible for us to meet remotely. I want to wish people around the world the very best of health and patience”, the Visit Rovaniemi portal quotes the dressed-up Santa Claus saying.

Also Lordi, another prominent celebrity from Rovaniemi, appeared at the vaccination centre this weekend where he received his second dose of the vaccine.

In 2006, Lordi won the Eurovision Song Contest title, the one and only time Finland has made it to the top in the competition. In honor of the win, the central square in Rovaniemi is named Lordi square.

Lordi, whose real name is Tomi Petteri Putaansuu, says he has spent a year and a half staying put in Rovaniemi.

“Our European tour was postponed time and time again. Bearing this in mind, times have been rather tough. Nevertheless, I’ve enjoyed this past year and a half because we managed to do something that otherwise would have been impossible: we made seven albums during this time – kind of a world record”, Lordi boasts.

“I just hope everybody uses common sense. If we want this world to get back to normal, or at least something close to normal, people have to realize we’re all in the same boat. My message is: take the shot!”, Lordi encourages.

From July 26th, Finland opened its borders for vaccinated travelers from around the world, including China and other countries important for Lapland tourism.

A proof of a valid vaccination against VOCID-19 must be presented at the border control. As previously reported by the Barents Observer, Finland doesn’t include any of Russia’s four vaccines on the list of approved jabs.

Over the last month, the number of new infections in Finland has increased from a 7-day average of about 80 to 632 as a daily average the last week.

38 cases were recorded in Lapland Hospital District the last week of July, according to the regional coronavirus portal.

Norway, Finland’s neighbor in the north, imposed new restrictions for travelers arriving from Lapland from Monday August 2. Everyone who is not fully vaccinated, crossing the border from Lapland, must now quarantine.

According to Finland’s National Institute for Health and Welfare, vaccination coverage in Rovaniemi is around 10 behind the national average, Finnish broadcaster YLE reports.

Markku Broas, Chief Physician of Infectious Diseases of the Lapland Hospital District (LSHP), told YLE that the vaccination event with Santa Claus and Lordi was a success, with over one hundred people waiting outside in the queue to receive their first jab before doors even opened.

“This event was very well received. A good number of vaccines were administered over the weekend, and young people, in particular, got vaccinated. That’s a really good thing,” Broas said.