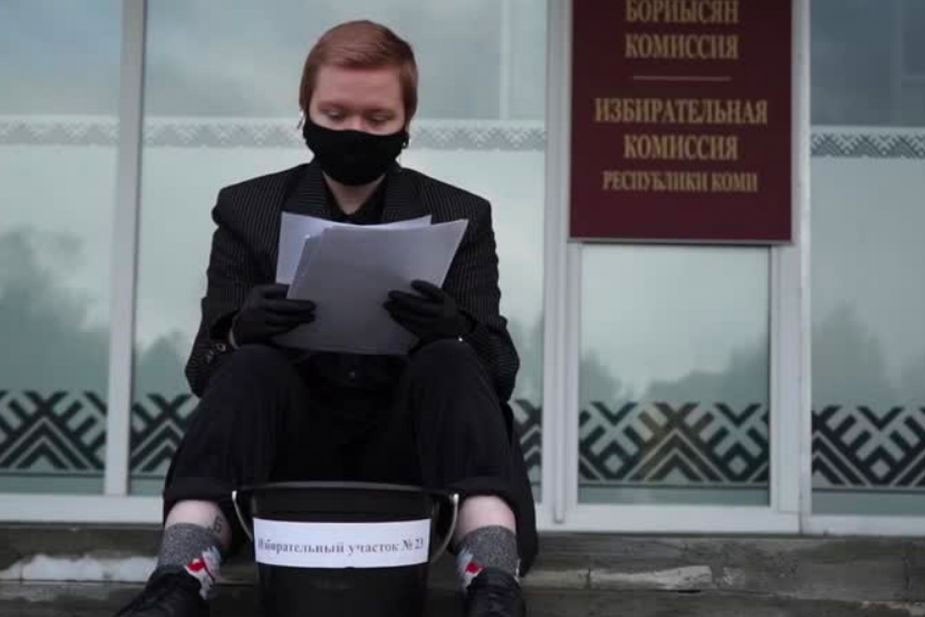 "It just seems to me that the Election Commission, instead of destroying unwanted ballot cards, may want use them somehow: for example, to decorate the State Council on the eve of winter and the New Year."
Read in Russian | Читать по-русски
By

In the show staged this week in front of the Election Commission building in Syktyvkar, Komi Republic, activist Nina Popugaeva cut paper snowflakes from ballot cards with votes for opposition parties.

The action titled “Winter is coming” is aimed at members of the regional Election Commission.

“I want to show them that there are alternative ways of destroying «unwanted» ballot cards with votes for representatives of the opposition,” she told 7x7-journal.

In a video from the show, Popugaeva is sitting in front of the regional Election Commission building and pulling ballot cards from a bucket with the inscription “Polling station commission No. 23”.

At the same time, the song Peremen (“Changes”) from rock band Kino is played in the background.

“There is no hint of protests in the action. It just seems to me that the Election Commission, instead of destroying unwanted ballot cards, may use them somehow: for example, to decorate the State Council on the eve of winter and the New Year,” she told the regional news journal.

“By unwanted, I mean ballot cards with votes for parties that are considered oppositional in the Komi Republic, such as the Communist Party,” she explained, adding that the ballot cards used in the performance are not real, but simply printed photos from the Internet.

It is not the first politically inspired show staged by Nina Popugaeva.

In June this year, she was detained for a performance titled «The Last Edits», where a man carrying a Putin mask covered the Russian Constitution with white paint. Following the 1 July national referendum on new Constitution, Popugaeva held one-person pickets against its results daily. Because of this, the police drew up three reports on her for violating the procedure for holding a public event.

Nina Popugaeva is a journalist and activist, and a member of the Queerrrriot LGBT+ Community in Syktyvkar.

Last week’s regional elections in the Komi Republic have been subject to harsh criticism from the opposition after the United Russia won 20 of the 30 seats in the regional State Council with only 20,8 percent of the votes.

In addition to the vote for legislative assembly, there was also governor’s elections in the region. That was won in a crushing victory by Acting Head of the republic Vladimir Uyba. However, strong opposition candidate Oleg Mikhailov from the Communist Party had been barred from participating.