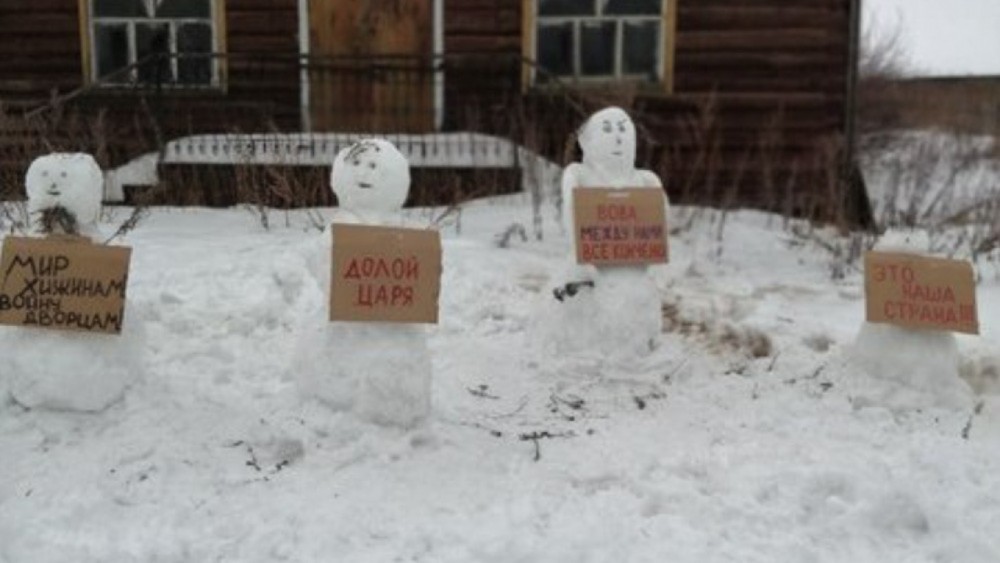 The snowmen held signs with anti-Putin slogans, including “Down With the Tsar.” Photo from twitter @borovikov_andre

An activist in northern Russia has been detained for organizing a “mass rally” against President Vladimir Putin using snowmen she built, a fellow activist said Wednesday.

A photo shared by Arkhangelsk activist Andrei Borovikov shows four snowmen holding up anti-Putin placards. One of them references the billion-dollar palace that jailed opposition leader Alexei Navalny claimed belongs to the president in a viral investigation.

“The cops don’t know what to do, they’re calling higher-ups every other minute,” he added.

Local media later reported that police tore down the snowmen’s placards (one of which read “Down With the Tsar”) and filed a report against Kalinina.

Around 3,000 out of Arkhangelsk’s 350,000 residents attended the rallies in one of Russia’s northernmost cities.

Navalny was jailed under an old fraud conviction he says is politically motivated following his Jan. 17 return to Russia from recovery for nerve agent poisoning he blames on the Kremlin.

Putin, who has acknowledged that Russian security agents had been tailing Navalny as a national security threat for years, denied this week that the alleged palace belongs to him.

This article first appeared in The Moscow Times and is republished in a news sharing partnership with the Barents Observer.