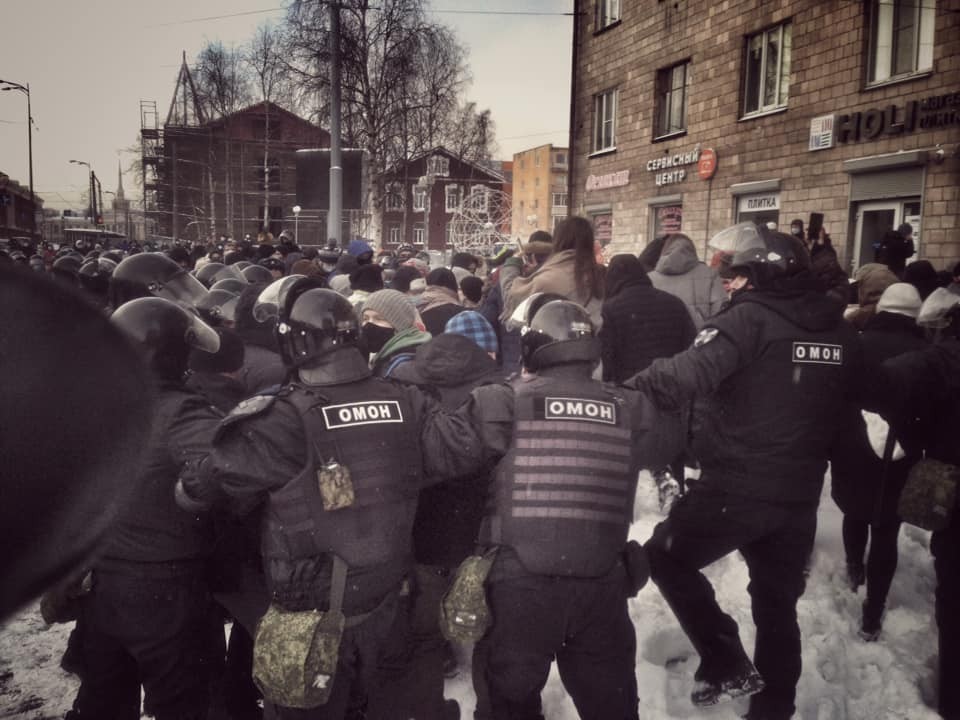 More than 4,000 protesters are detained all over Russia on Sunday as Navalny’s allies took to the streets in the second round of protests against corruption and Putin’s totalitarianism.
Read in Russian | Читать по-русски
By

Compared with Moscow and St. Petersburg, where more than 2,000 protesters were detained, the street marches in northern cities took place without similar violence by riot police.

Navalny’s support team in Murmansk reports about a few arrests, among them coordinator Violetta Grudina and her deputy Aleksandr Surinov.

About 100 people participated in the protest in Murmansk.

In Arkhangelsk, six people were detained before protests started Sunday morning, and over ten more were brought in as the march continued through the city. The majority of protesters were students, but also a few elderly people participated, videos posted by local bloggers on social media show.

200-300 people joined the protest on Prospekt Lenin in Petrozavodsk, the capital of the Republic of Karelia.

Local journalists Valery Potashov said the protesters walked down Lenin Prospekt, chanting Freedom and One for all, all for one. Then, they were stopped by riot police officers who pushed them towards the wall of a house. The police, however, did not arrest the protesters, but gave them warnings that the rally was illegal.

In Sykyvkar, Komi Republic, the crowd of protesters walked to Kirov Park where the Interior Ministry offices are located. There, police and Rosgvardia forces were guarding the building. Many of the participants were detained, while others dispersed. Among the arrested is Daria Chernysheva, staff-writer for the 7x7 Journal.

The independent news journal keeps track of most Navalny support protests in the northwestern regions of the country.

By Sunday evening, 4,132 people are detained in more than 60 cities across Russia, according to OVD-monitor, an independent portal tracking the police arrests and political persecutions.

62 of the detained are journalists or media-photographers the site informs.

This is the second Sunday in a row that people take to the street after the politically motivated arrest of Navalny and authorities’ lack of investigation into the use of chemical weapons in the assassination attempt against him.