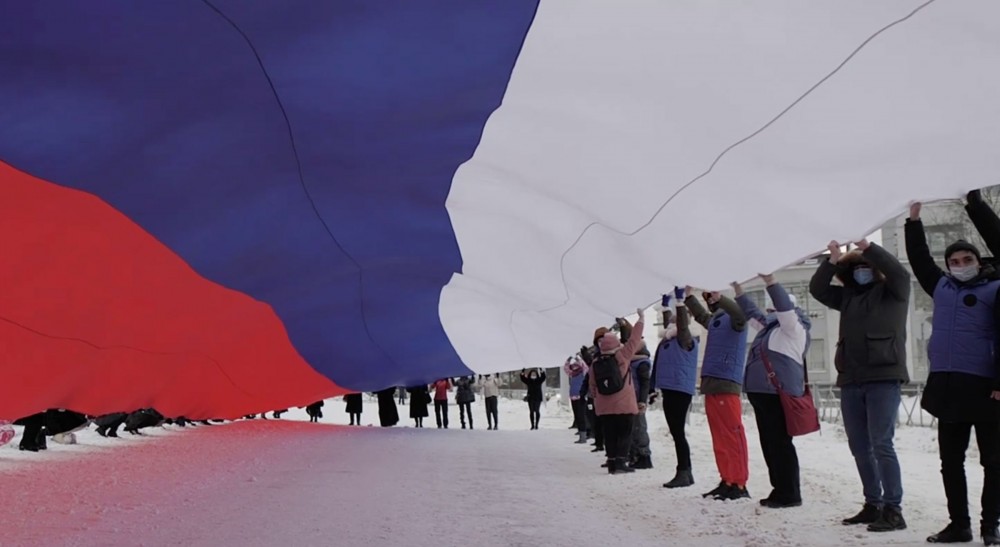 About 100 people took part in the rally at the central square in Arkhangelsk on Saturday. Screenshot: New Pomorie / Vkontakte

Not all unsanctioned rallies are met with police crackdown

No black helmets, no batons, no OMON uniforms. Not one single police insight as about 100 people took part in an unsanctioned rally in the center of Arkhangelsk this weekend. The organizer is unknown, but a video of the event posted on social media is concluded with the words "Pomorie For Putin."
Read in Russian | Читать по-русски
By

The video is posted on the Vkontakte page of New Pomorie, Arkhangelsk, and comes in sharp contrast to the wave of pro-Navalny protests across Russia in recent weeks where more than 10,000 people are detained.

A 60-meter long Russian flag was in the center of the gathering.

The Vkontakte page points to history, claiming the tricolor flag was first raised on a ship at the Solombola yard in Arkhangelsk by orders of Tsar Peter the Great in 1694.

“Today, in the homeland of the Russian flag, the northerners displayed a large-scale  60-meters copy of the flag of the Russian Federation. Without slogans and appeals, it is beautiful and symbolic. To build the future, you need to know and remember the past,” the text said.

Pomorie is the old name used by locals in the White Sea region to describe where they live, “by the sea.”

“Now, due to the pandemic, it is forbidden to organize events,” said head of the press service of Arkhangelsk city administration, Irina Buinovskaya, when asked by regional news online 29.ru about who granted permission to organize the rally.

Neither could the regional Ministry of Internal Affairs, in charge of law enforcement, answer on possible sanctions for the people violating the COVID-19 restrictions.

Putin’s press secretary, Dmitry Peskov, told reporters on Monday that Kremlin had nothing to do with the rallies.