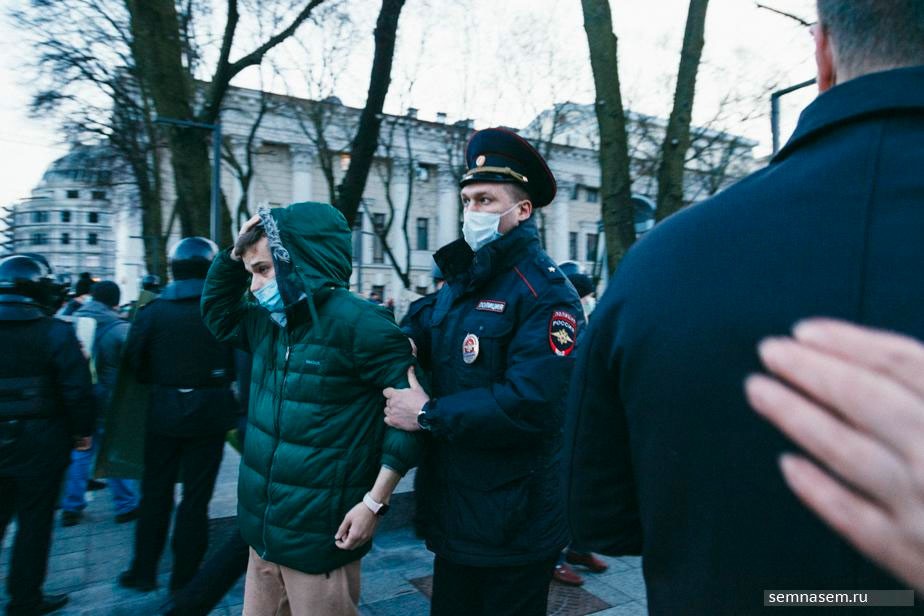 The people who gathered in the central square of Petrozavodsk to support Aleksei Navalny read poems and chanted protest songs.
By

A total of 13 people were detained during the protest rally in the Karelian capital, 7x7-journal informs. The support action for arrested opposition leader Aleksei Navalny gathered about 150 locals.

As the detentions proceeded, the protesters sang cult musician Viktor Tsoy’s song “Peremen” (change) and recited poems by national writer Aleksandr Pushkin. Police warned the protesters that the rally was illegal, but was interrupted by handclap and quotes from the Russian Constitution.

Police takes action against Navalny supporters across the Russian North. Video by 7x7-journal

Among the detainees was local activist Sergei Filenko, who read aloud from Rudyard Kipling’s “The Jungle Book”  as police officers carried him away.

Support rallies for Aleksei Navalny were on the 21st of April held across Russia. The protests coincided with Vladimir Putin’s speech to the Legislative Assembly. In his address, Putin accused Western countries of blindly trying to please the US, “just like the small jackals behaves with the tiger Shere Khan in Kipling’s tale.”

The clashes between demonstrators and police were most brutal in St.Petersburg where more than 70 people were detained. According to ODV-info, there were police detentions of protesters in 100 cities and towns across the country.

In Murmansk, regional opposition leader Violetta Grudina was taken in by police along with two more protesters. In Arkhangelsk, a total of 11 people were detained, and in Syktyvkar - there were 3 detentions.

The demonstrations were held as the health situation of Aleksei Navalny is deteriorating, and several of his close aides fear he might soon lose his life. The opposition leader was detained by police immediately after his return to Russia on 17 January 2021. He was subsequently sentenced to more than 2,5 years in prison in a false trial and is now behind bars in a prison in Vladimir, about 180km from Moscow.

Support rallies for Navalny were this week held also in a big number of cities outside Russia. In Oslo, emigre Russians have organized a support group called Smorodina that on Wednesday assembled people in front of the Norwegian parliament.

Law enforcement authorities this week also raided a number of regional Navalny offices across the country. In addition, the Russian General Prosecutor now intends to declare Navalny’s Anti-Corruption Foundation an “extremist organization”, which could open up for long prison sentences for a big number of Navalny’s supporters.