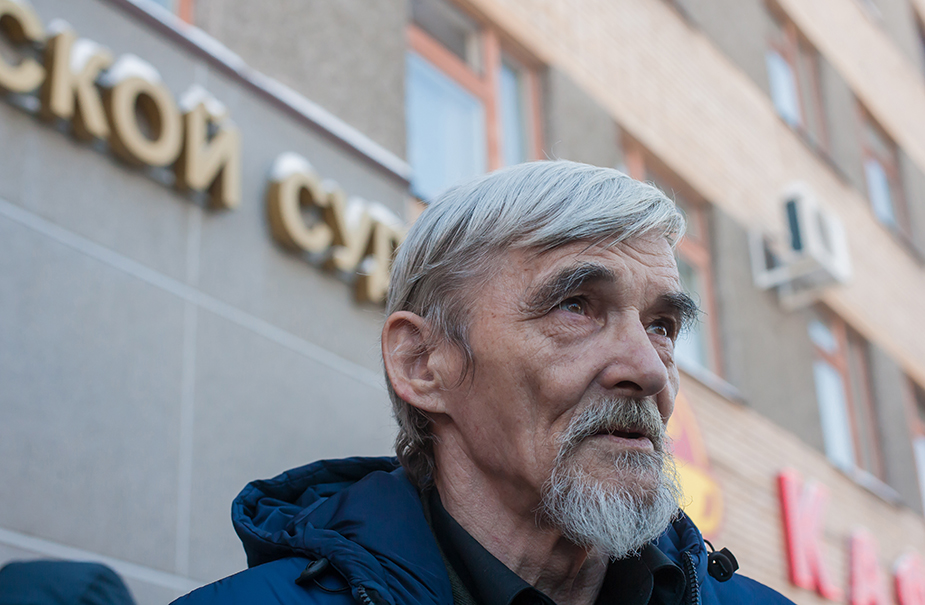 Yury Dmitriev outside the court in Petrozavodsk. Photo from nhc.no

Yury Dmitriev receives the prize for his work to identify victims of Stalin’s terror in Karelia.
Read in Russian | Читать по-русски
By

Dmitriev is well known for his research and campaigns to create a memorial to the victims of Soviet terror in the Republic of Karelia, a northwestern province near Russia’s border to Finland.

“Yuri Dmitriev has returned the human value back to the Russian state. He confronts the past and gives a new vision for the future, which today’s regime does not have,” says Secretary General of the Norwegian Helsinki Committee, Geir Hønneland, to the Barents Observer.

Explaining the reason behind the award, Hønneland says it is not only about Dmitriev as a historian. “His work has already inspired thousands of young and old people, who want to find their dearest in the darkest graves. It is about hope and common identity.”

Millions were killed during Soviet terror, but the victims of these atrocities and their living relatives have never been given real justice. This was what Yury Dmitriev was working on. In the forests of Karelia, tens of thousands of people were shot and killed without trial or conviction and buried in mass graves.

“You can draw a line from Andrei Sakharov’s time as a political prisoner, from his struggle to ensure that Russia faces up to its past and the importance of documentation and truth to prevent new atrocities, straight up to Yury Dmitriev’s struggle in modern-day Russia,” Hønneland says.

Dmitriev is currently serving a 13 years prison sentence and is considered a political prisoner by the Norwegian Helsinki Committee and other leading human rights organizations.

May 21, 2021 marks 100 years since the birth of Andrei Sakharov. Due to current restrictions related to Covid-19, the award ceremony will be held on 29 October 2021 in cooperation with the City of Oslo, on the annual Day of Remembrance of the Victims of Political Repressions in the Soviet Union.

Earlier this week, authorities in Moscow canceled an exhibition dedicated to the 100th anniversary of Sakharov’s birth. The long-time planned photo exhibit titled Andrei Dmitriyevich Sakharov: Anxiety and Hope, by the Sakharov Center would go on display on central Moscow streets starting on May 17.

The exhibition was supposed to show photos, as well as quotes from his articles and speeches.

Moscow City’s Department of Culture informed the organizers that the content of the exhibition was unacceptable.

Andrei Sakharov was one of the Soviet Union’s most known human rights activists and winner of the Nobel Peace Prize. In his early career, he played a key role in the development of nuclear weapons, including the huge thermonuclear warheads tested at Novaya Zemlya in the Arctic in the late 1950s, early 1960s.