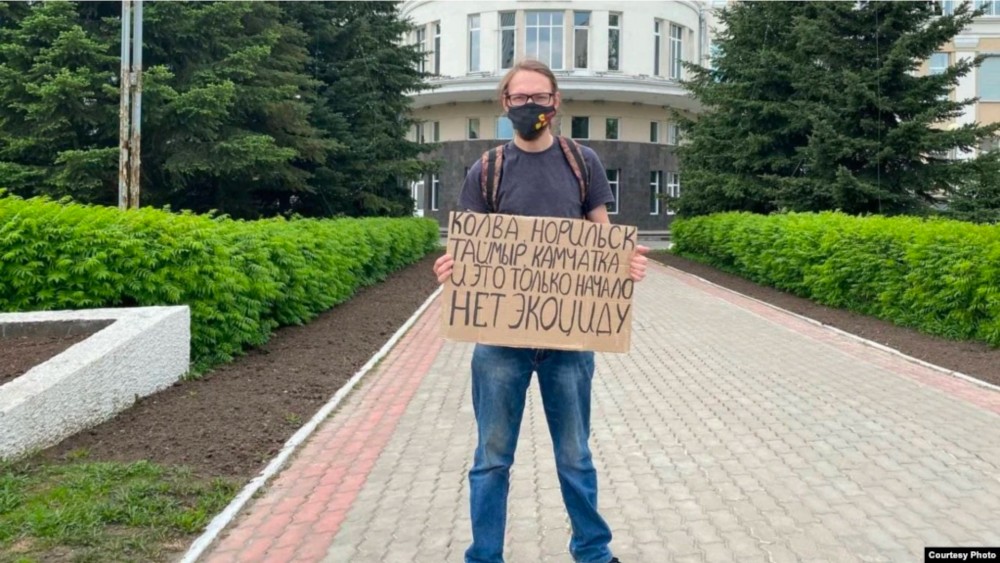 Yevgeny's silent protest against oil spills was repressed by police

The environmentalist stood alone with a placard in the central square of Arkhangelsk when policemen approached and fined him for violation of coronavirus regulations.
Read in Russian | Читать по-русски
By

Korsak had found a place near the regional government building in Arkhangelsk and held a placard that read “Kolva, Norilsk, Taymyr, Kamchatka. And this is only the beginning. No to ecological murder.”

In a comment to Sever.Realii, the activist says that he wanted to draw attention to environmental problems.

“The intention with the protest was to show that the oil spills happen very frequently [and] the spill in Kolva is indicative. The further away, the more frequent the spills. Because of the worn-out reservoirs, the pipelines more often decompress with devastating consequences. According to official information, up to 150 spills happen every year.”

Regional Governor Aleksandr Tsybulskiy has banned all public rallies and mass gatherings because of the risk of COVID-19 spreading. The police has fined Korsak with violations of Article 20.6.1 in the regional administrative violations codex (negligence of regulations on conduct in emergency situations).

Regional authorities in the Komi Republic in mid-May declared an emergency situation in the Usinsk municipal district when an oil spill from a leaked pipeline was seen spreading 45 kilometers downstream the river Kolva.

The most contaminated parts of the Kolva river are near the town of Usinsk, often referred to as the oil capital of the Komi Republic. The town made worldwide headlines in 1994 as more than 60,000 tonnes of oil leaked out from a broken pipeline. The spill was one of the most serious environmental disasters in Russia in the 1990s.