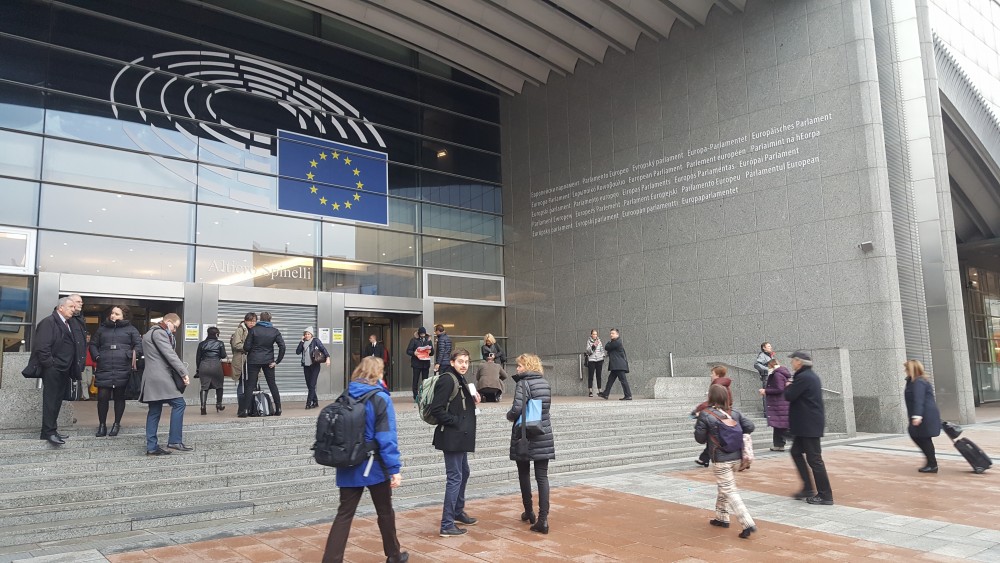 As voters start going to the polls in Russia's State Duma election, the European Parliament adopts one of its strongest-ever condemnations of the Kremlin's anti-democratic and aggressive behavior. The EU assembly calls on Europe to jointly confront the Russian regime and at the same time positively interact with the Russian population.
Read in Russian | Читать по-русски
By

The European Parliament on the 16th September adopted the document that EU legislators propose as basis for political relations with the big eastern neighbor.

The document titled “Direction of EU-Russia political relations” was approved by 494 votes in favor, 103 against with 72 abstentions, the Parliament informs. It includes a number of recommendations to the EU Council, the Commission and other EU bodies.

MEPs call for new EU strategy to promote democracy in Russia. Parliament says the EU must push back against aggressive policies while laying the groundwork for cooperation with a future democratic Russia → https://t.co/zcwE1jYIz2 pic.twitter.com/mRqrh91Q3B

The text was adopted on the eve of the Russian State Duma elections, a vote heavily dictated by Kremlin efforts to control both the the election process and its outcome. According to the EU legislators, Putin’s Russia is fundamentally anti-democratic, and the country’s authorities are actively undermining all instruments of a free society.

In its introductory part, the document highlights that:

“President Putin’s regime is a stagnating authoritarian kleptocracy led by a president-for-life surrounded by a circle of oligarchs.”

The regime “suppresses democracy, democratic opposition and the right for the people to express their free will,” the legislators say. They make comparisons with the situation in Belarus in August 2020 when President Lukashenko massively cracked down on candidates and then falsified the election results.

The EU must be prepared not to recognise the Parliament of Russia and also call for Russia’s suspension from international organisations with parliamentary assemblies, in particular the Parliamentary Assembly of the Council of Europe, the legislators say.

The condemnation from Brussels quickly got a response from Moscow. In her weekly press conference, Foreign Ministry Spokeswoman Maria Zakharova on Thursday lashed out against the MEPs, calling their new paper a “disinformation document.”

“It is another collection of far-fetched accusations, conspiracies and ideological cliches against our country, made to strain the already difficult relationship between Russia and the EU, influence domestic processes in our country,” Zakharova underlined.

The European Parliament has also on several previous occasions adopted harsh condemnations of Kremlin policies. But this week’s document appears unprecedented in its style and language and could significantly impact EU action against the big east European country.

Among its recommendations is a ramped-up EU foreign policy that can help deter Russia and maintain peace and stability in Europe and beyond. Together with NATO, the EU should strengthen its own defence capabilities, and also strengthen cooperation between member states intelligence services.

The legislators argue that the EU needs to draw up and implement a clear strategy on how to end dependency on Russian gas and oil and other raw materials.

They also call for the establishment of “an alliance that can defend democracy globally”, as well as the creation of a “democracy defence toolkit.”

Measures must be taken to address Russia’s manipulation of information and attempts to interfere in democratic processes at EU level and in its Member States, and the necessary instruments to oppose and tackle them must be put in place.

The legislators underline that EU should create new means for more efficiently demanding the release of political prisoners and also “initiate and contribute to international investigations into crimes committed by President Putin’s regime against the people of Russia.”

And on top of the priority list of the European Parliament is the support to the people of Russia. Whereas the Kremlin must be deterred, rapprochement must be made with ordinary Russians. The EU legislators call on the adoption and publication of an ‘Address to the Russian people.”

That address will include a confirmation of a firm European support to the development of democracy in the country.

It will also include an EU obligation to support Russian civil society and people-to-people contacts between the EU and Russian citizens. Considerations must be made to reduce visa fees and barriers for Russian citizens and lead an effective information campaign to show that the EU welcomes the Russian people, the MEPs say.

Furthermore, the EU should also “broaden its school, university, scientific and cultural exchange programmes with Russia, and consider offering traineeship and direct recruitment opportunities for both high-skilled and lowskilled workers from Russia.”

While confronting the current Russian-language propaganda and disinformation campaigns of President Putin’s regime in the EU and Russia itself, the EU Parliament calls for strengthened support to independent journalists and media outlets that offer an alternative to the Kremlin’s disinformation.

Russia cannot be democratic without independent media, the legislators underline.