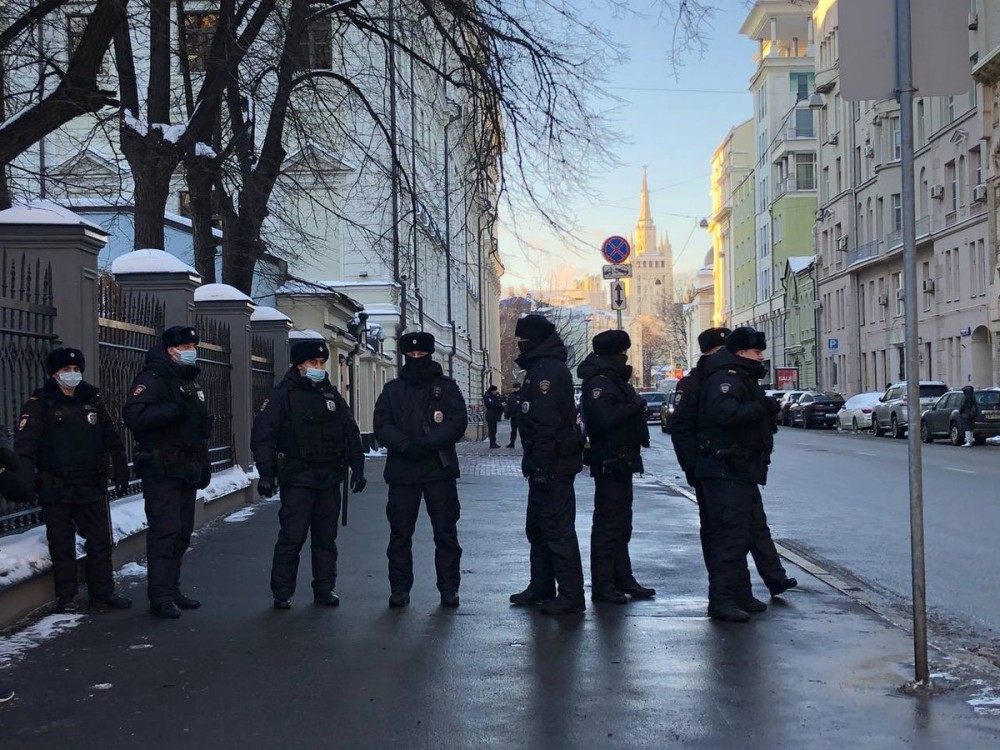 Police officers outside the Supreme Court during the case against International Memorial. Photo: Memorial

The forced liquidation of the human rights organization is a major setback for the country and increases the risk of total repression, lawyer Maria Eismont said in her defense of the NGO that over more than 30 years has revealed Soviet-era crimes.
Read in Russian | Читать по-русски
By

Supporters had gathered outside the Supreme Court building in downtown Moscow and the court room was full of journalists and defendants of the sides.

But the strong support for the International Memorial from all over Russia and across the world had little impact on the court.

Judge Alla Nazarova at about 2 pm Moscow Time announced that the organization and all its subsidiary units are to be closed.

The case was filed by the Russian General Prosecutor in early November on the official ground that Memorial has failed to comply with regulations on so-called “foreign agents.”

However, according to Memorial and its lawyers, other underlying issues are behind the case.

That was clearly confirmed by the General Prosecutor during the hearings. In one of his addresses, Prosecutor Zhafyarov said that “International Memorial creates a false picture of the SSSR as a terrorist state and smears the memory of the Great Patriotic War […],” Memorial informs.

According to Zhafyarov, Memorial tries to “rehabilitate Nazi criminals,” and furthermore that “someone is paying for it all.”

According to OVD-info, the news site that follows up human rights abuses in Russia, the closure of International Memorial is a political decision and a “verdict against all of Russia’s civil society.”

It must be seen as an unmistaken signal to Russian society and the elites, OVD-info writes. “Consequently, repressions were needed and useful for the Soviet state in the past, and they are needed for us today.”

“Memorial is an institute of national memory of the Great Terror and Soviet repression [and] the closure of such an institute is a public justification of Stalin’s repression.”

Symptomatically, the website of OVD-info was earlier this week blocked in Russia, and the news is now available only on social media.

Memorial was built on the heritage of Andrei Zakharov and has been a cornerstone in east European civil society since it was established in the late 1980s.

In her defense of Memorial during today’s court session, lawyer Maria Eismont underlined that the case is a “big setback for the country” that it “increases the risk of total repression.” Eismont is one of the the four lawyers that have defended the organization.

In his Nobel Peace Prize award speech, Editor of Novaya Gazeta Dmitry Muratov underlined that Memorial is “not an enemy of the people, but a friend of the people.”

According to Muratov, Russian authorities are now actively promoting the idea about war, and people who warn against bloodshed are described as “weak people,” while the ones who threaten the world with war are seen as “real patriots.”

Vladimir Putin has himself partly justified the clampdown on Memorial. In a meeting with civil society representatives in December, the president accused the organization of supporting terrorist organizations and also said that its lists of victims of Soviet repression include individuals that actually were associated with Nazis and conducted grave crimes against jews. He also underlined that Memorial repeatedly has “demonstratively violated the law.”

Today’s verdict by the Supreme Court has triggered harsh reactions from the international community.

“It is a tragic development [which] means that Russians will lose important sources of knowledge of their history,” says Swedish Foreign Minister Anne Linde.

Her Norwegian colleague Anniken Huitfeldt says she is deeply concerned about the Supreme Court’s decision to close down Memorial.

“We call on Russia to stop the destruction of civil society and meet International human rights obligations,” she underlines.