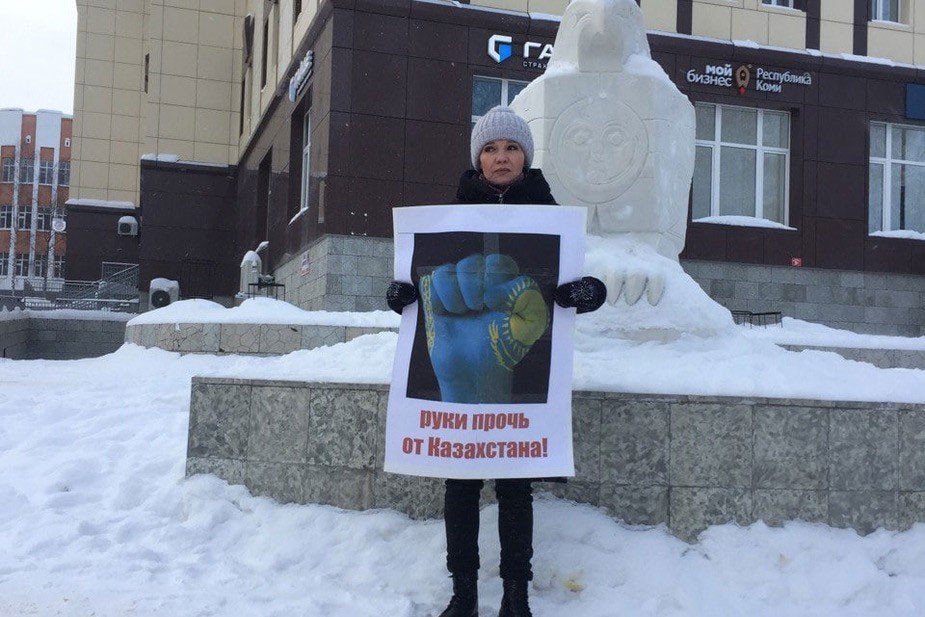 In a single-person protest against her country's intervention in the neighboring country, Yelena Gulina stood bravely in a downtown square in Syktyvkar.
Read in Russian | Читать по-русски

“The government of Kazakhstan must independently decide its domestic problems,” Gulina argues.

“I am bothered by the intervention of our forces. How we can create peace with weapons is for me incomprehensible,” she underlines in a comment to 7x7-journal.

This weekend, she could be seen in downtown Syktyvkar with a poster reading “Hands off Kazakhstan.”

“I understand the Kazakhs, who are tired of suffering, [and] the last drop was the increased prices on gas, the only cheap fuel that they use,” Gulina says.

The silent and single-person protest took place in a street near the People’s Friendship Center. Police officers came up to her and registered her name, but she was not detained.

Gulina is one of utmost few people that took to the streets of Russia to publicly protest the recent deployment of troops to neighboring Kazakhstan. According to 7x7-journal, there were similar protests in seven other regions, among them Moscow and the Moscow region, as well as Astrakhan and Novosibirsk, two regions that border on Kazakhstan.

Following the national-wide rallies and violent uprising against the Kazakh regime, Russia on the 6th of January decided to send troops to the neighboring country. The intervention came on a request from Kazakh President Kassym-Jomart Tokayev and was officially made within the frames of the Collective Security Treaty Organization (CSTO). Troops are also sent from Belarus, Armenia, Tajikistan and Kyrgyzstan.

According to Tokayev, foreign fighters played a key role in the riots, and their mission was to create chaos and subsequently take power. The decision of the CSTO to deploy troops was crucial for the clampdown of the fights, he argued in a meeting with alliance leaders on the 10th of January.

It is the first time that the Russia-led defense alliance sends troops to one of its six member countries.

The collective defense structure was established in 1992 with a mandate to interfere in a member country attacked by outside powers.