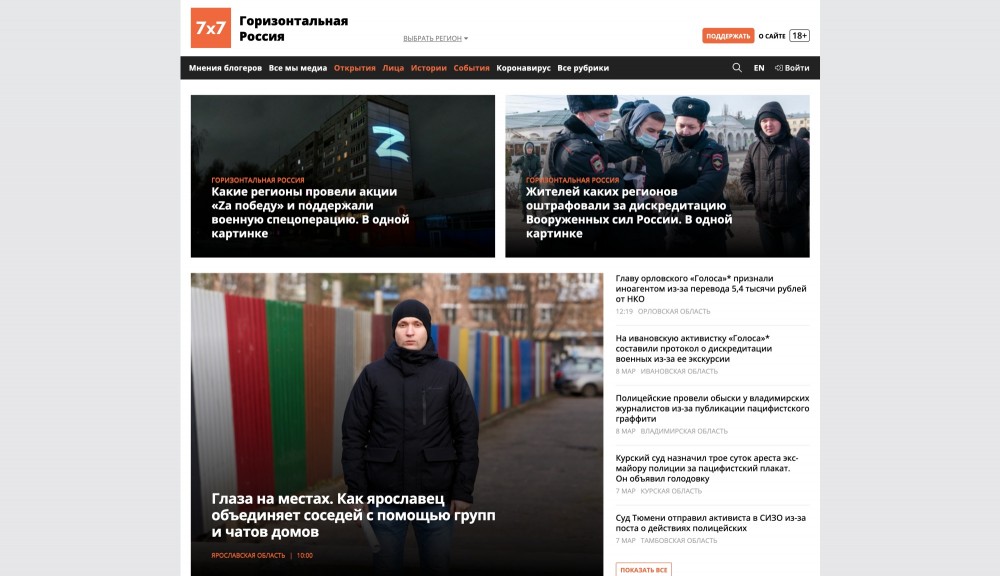 News about the war in Ukraine made Russian media regulator Roskomnadzor block the 7x7-journal. Photo: Screenshot from 7x7 frontpage

Online journal 7x7 have repeatedly repelled attacks from Russian censorship authorities. This week, the independent newsroom based in the north Russian region of Komi was switched off from the RuNet.
Read in Russian | Читать по-русски
By

State media regulator Roskomnadzor this week sent a notice to the editors of the journal informing about the upcoming blocking. The journal had failed to comply with the new state regulation compelling media to describe the assault on Ukraine as a ‘military operation’ and not a ‘war’, the censorship authority explained.

The journal subsequently became unavailable on the RuNet, the Russian-language community on the internet.

But the newsroom that has reporters across several regions in Northwest Russia refuses to give up.

Alternative channels of information are now being opened.

“We assure our readers that we under no circumstances will discontinue to make honest texts about developments in Russian regions, about the way civil society unites people and helps protect their rights and about events that affect us all,” a statement from the journal reads.

The 7x7-journal can now be accessed through an alternative URL that mirrors the contents of the site. The journal also remains available with VPN, and social media postings will continue.

“Stay tuned and never forget that after every night comes dawn,” the journal tells its readers.

Director Pavel Andreev says to the Barents Observer that the journal now needs some time to re-structure its team and strategy. “This will be done in nearest weeks,” he underlines.

Over the years, 7x7-journal has published countless reports about civil society developments in Russian northern regions. That includes human rights abuses, environmental crimes, local community development and crackdown and imprisonment of activists, journalists and environmentalists. Some of the stories have been republished by the Barents Observer.

The 7x7-journal has since its establishment in 2008 developed into a leading independent voice in northern Russia. The journal today has reporters and bloggers in a number regions, from Murmansk and Karelia in the west to the Komi Republic and Yamal-Nenets region in the east.

According to Pavel Andreev, it is much harder to do independent journalism in the regions than in Moscow, «In regions, if the Roskomnadzor wants to attack you, there is nothing that can stop them,» he told the Barents Observer in 2018.

Only in 2017, the Roskomnadzor in the Komi Republic launched more than ten cases against the 7x7.

«It just gets worse, and they just do not let us do our job,» Andreev underlined.

The 7x7 is not the only media that has been blocked since the start of the war. To the list of blocked media has been added also Dozhd’, Ekho Moskvy, Republic, Snob, Agenstvo, Sobesednik, Dokha, Meduza and many more.

On the list is also Trotsky Variant, the research newspaper that recently published the open anti-war letter signed by more than 7,500 researchers.

The Barents Observer is today available in Russia only with a VPN and through the alternative URL barentsobserver.co

Its news reports are also available as audio articles recorded by a professional podcaster.