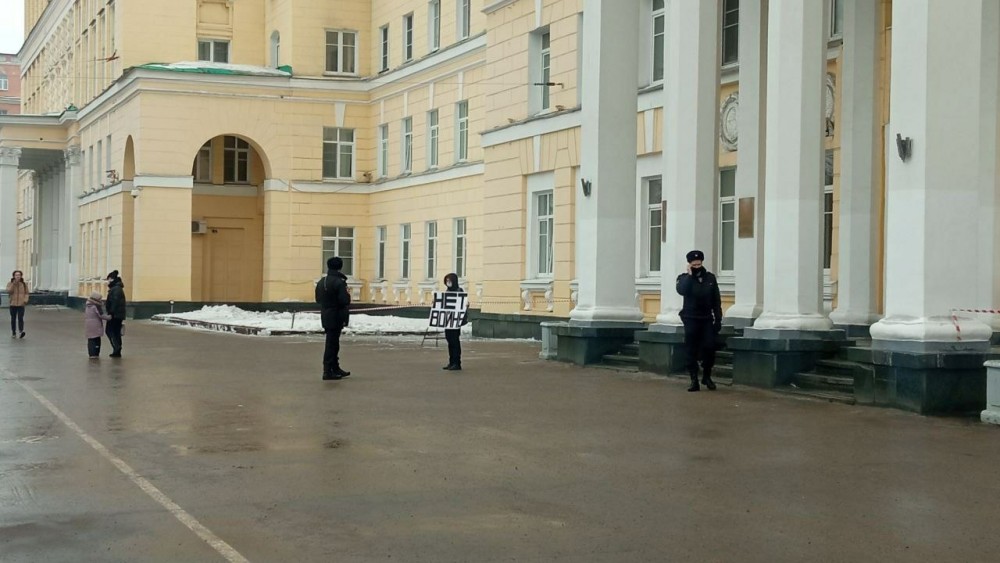 The young man who stood in front of the regional government building in Murmansk with an anti-war poster was soon approached by police.
Read in Russian | Читать по-русски
By

Russia is conducting the most serious violations of international law in Europe since the Second World War, but despite the massive war crimes people in Murmansk show little will of protest.

One exception is the young man who on Tuesday placed himself in front of the regional government building with an anti-war poster.

Police officers soon approached the man, and he is likely to have spent hours in the local police station.

A similar protest this week took place in Polyarnye Zory, the town located about 200 km south of Murmansk. According to Blogger51, two locals stood in the central town square with posters.

“No War,” read their posters.

Both men were detained by police. The protest was not approved by local authorities, a notice from the prosecutor’s office reads. The case will be followed up the prosecutors.

Russia’s invasion of Ukraine has triggered street rallies in several big cities. But the number of people participating has been modest. In north Russian regions, only few cases of rallies have taken place.

In Syktyvkar, the capital of the Komi Republic, activist Yelena Gulina was detained for a single-person protest on the 1st of March. “Folks, help us stop Putin,” she shouted as police approached, 7x7-journal reports.

There have also been cases of protest in the Republic of Karelia, the region that borders with Finland.