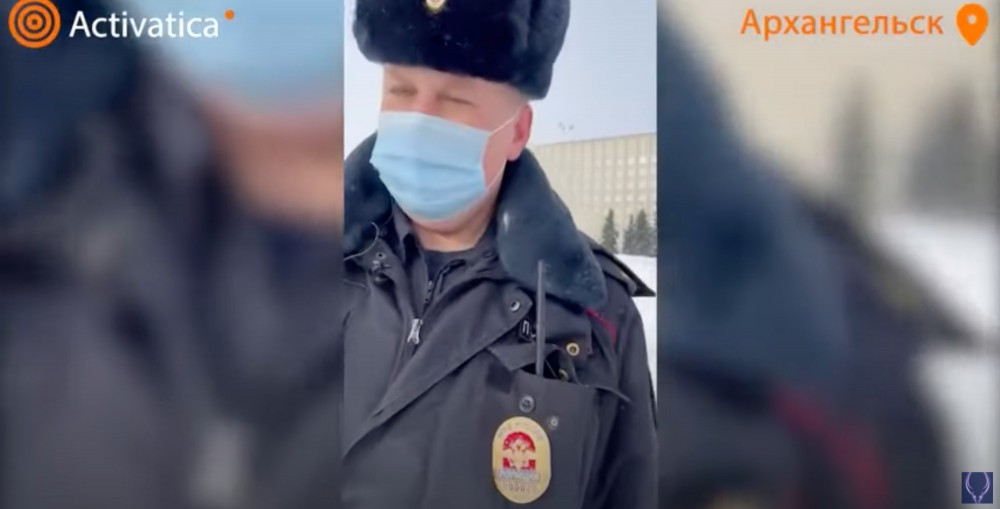 Aleksandr Ryakov called out "Slava Ukraine" on the central square of Arkhangelsk and was immediately detained by police. Screenshot of video by Activatica

60-year old Aleksandr Ryakov on the 6th of March walked to downtown Arkhangelsk where he with a clear voice called out “Slava Ukraine!” (glory to Ukraine!)

A nearby policeman immediately grabbed the man and took him away, a video shows.

“I detain you for pronouncing the word “Ukraine,” which is prohibited,” the policeman told Ryakov.

“Where is it written that it is prohibited?” the pensioner wanted to know. “You have pronounced nationalistic slogans,” the officer answered.

It later became known that the Arkhangelsk police has charged Ryakov for having engaged in “public actions aimed at discrediting the Russian Armed Forces and harming national interests, international law and national security,” Activatica informs.

The pensioner has not admitted any guilt and has refused to give testimony to the law enforcers, Activatica reports. He now faces a fine up to 50,000 rubles big, a huge sum for a man with a 13,000 ruble monthly pension.

Ryakov is far from the only Russian that has taken to the streets to express his opposition to the war against Ukraine. There have been anti-war rallies across the country, and protesters have been met my massive police presence.

Since Russia attacked Ukraine of the 24th of February almost 15,000 people have been detained, OVD-info reports.

However, only few cases of protests have been registered in the Russian North.

Murmansk activist Violetta Grudina actively called on her fellow northerners to take part in a nation-wide rally on 13th of March. According to the Telegram channel Protestny Murmansk there were people in the streets. But it is not clear how many and whether there was a clampdown by police.