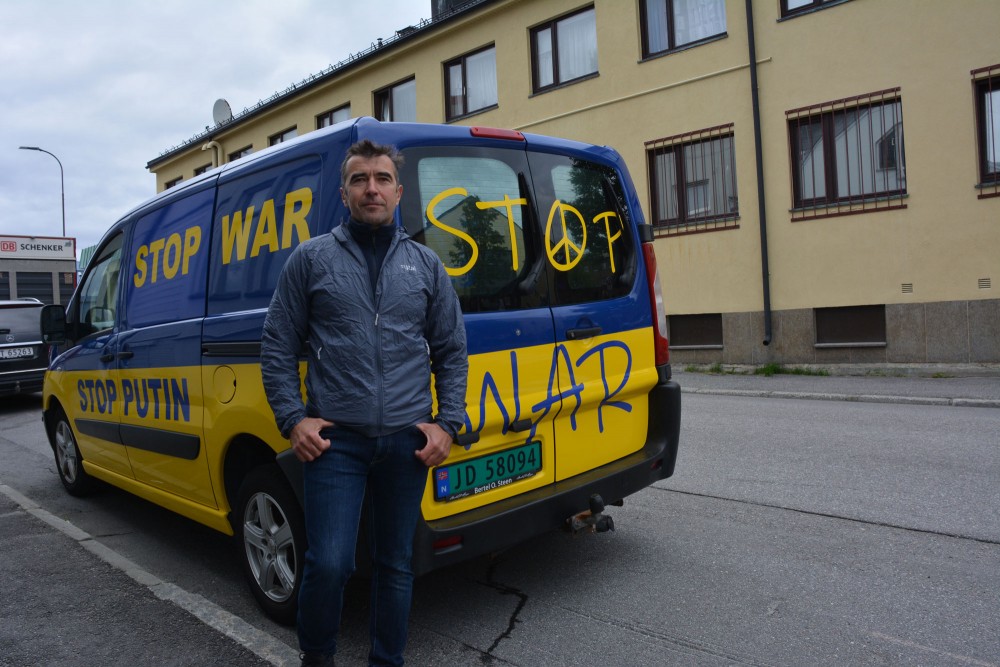 Ahead of Ukraine's Independence Day, Anton painted his car in yellow and blue. Locals in Kirkenes must do much more to show opposition to the war and Putin's regime, he says.
Read in Russian | Читать по-русски
By

“The visitors to Kirkenes must see that we are against the war, against Putin and his regime,” says Anton Kalinin.

“We must put up Ukrainian flags across the municipality, including by the border crossing point of Storskog and by the entry to town,” he underlines.

The 50 year old Russian has indeed made his own contribution. Recently, he painted his van in the Ukrainian colours and added anti-war slogans.

On Wednesday this week, he drove the vehicle up to the local Russian General Consulate building where he took part in a public demonstration in connection with Ukraine’s Independence Day.

Anton Kalinin has lived in Norway for more than 20 years. He underlines that visiting Russians need to get a clear message.

“There is a war in the middle of Europe and Russia is the aggressor. Many of the Russians that visit Kirkenes today think that everything is fine and that there is no war,” he explains.

The small Norwegian town is located only few kilometres from the border to Russia and has a significant number of local Russian-speaking inhabitants.

According to Natalia Solianik, far from all of them oppose the war. And among the ones that are against, many are afraid to speak out.

“People are afraid,” she says. “Even though many have lived here for a long time, they are afraid,” she explains, and says it could be connected with the ruling atmosphere of fear in nearby Russia.

Solianik has been a front figure in the local anti-war movement in Kirkenes. Along with a group of local Ukrainians, she and a few fellow Russians have regularly organised rallies in front of the Russian General Consulate.

Not many people have attended. In Wednesday’s rally in connection with the Ukrainian Independence Day, about 30 people assembled on site. About a third of them were Norwegians.

“Many of my friends and the people I know support me and the fight against war, but they do not dare to come here to demonstrate because they have relatives in Russia and because they continue to travel to Russia,” Solianik explains.

She proposes to conduct a survey to get a better picture of local Russians’ attitude to the war.

Kirkenes has over the past three decades sought to build a position as gateway between east and west and as hub for Norwegian-Russian cooperation. Today, it is all in shatters. But many local politicians still refuse to give up hope for a rapid resumption of relations.

Local Mayor Lena Bergeng appears not to agree that the municipality should do more to flag opposition to the war.

On Wednesday, she and the whole Town Council took a brief break in a plenary session to attend the Ukrainian Independence Day rally.

Bergeng came to the site of the rally after the rest of the group and missed the playing of the Ukrainian national anthem. She stayed discretely outside the crowd, and did not take the microphone to address the audience.

She disagrees that a Ukrainian flag should have been raised by the entrance to the Town Hall.

“No, a flag in front of the town hall is not necessary. After all, they have Ukrainian flags here, in this rally. And this is also municipal property. I think it was alright to give them permission to put up flags here,” she told the Barents Observer.

She also reiterates her stance on the municipal friendship agreement with Severomorsk, the Russian town that houses the Northern Fleet. Despite the grave Russian war crimes in Ukraine, the town mayor argues that it should not be cancelled.

The agreement is only temporarily suspended, she explains to the Barents Observer.

Town Mayor Bergeng underlines that her municipality has condemned the war.

“We quickly condemned the attack, and that is about all that the Town Council can do,” she explains.

“I think it is only sad that the war has been going on for half a year and that it seems not stop any time soon,” she adds.

Also the local Conservative party has hopes for a rapid resumption of cooperation with Russia.

“I hope from all of my heart that cooperation will return as soon as possible,” says Nina Danielsen, leader of the local party group.

However, Danielsen argues that Kirkenes should cancel the cooperation agreement with Severomorsk and that more should be done to protest against the war.

“We can do much more than we have done so far,” she says, and underlines that a Ukrainian flag should have been raised in front of the Town Hall in connection with Ukrainian Independence Day.

Deputy town Mayor Elin Mathisen agrees that more can be done from the political level.

“We politicians should continue to attend these kind of rallies,” the representative of the Socialist Left Party says.

Party fellow Harald Sunde adds that contact and cooperation with Russians that oppose the war and the Putin regime must be preserved and developed.

“We must make sure that we uphold contact with the Russians, the ones that live here and the ones that we can work with in the future,” he underlines. “We must keep the balance between preserving contact with Russians, but not with Russian authorities. It is important to say that we are not against Russians as such, we value their culture, history just as much as before, but we are against today’s warmongering regime.”

In fall 2021, Sunde was awarded a medal from the Russian Ministry of Defence for his work to map partisan activities during the 2WW. The politician returned the medal to Moscow following the onslaught on Ukraine.

Not all of the Kirkenes Town Council members wanted to attend the Ukrainian independence demonstration. William Sjøstrand, a local Russian and representative of the rightwing Progress Party, demonstratively marched through crowd and refused to comment on his pro-war stance when approached by the Barents Observer.

A few hours before the rally, Sjøstrand had warned his fellow council members from attending the rally.