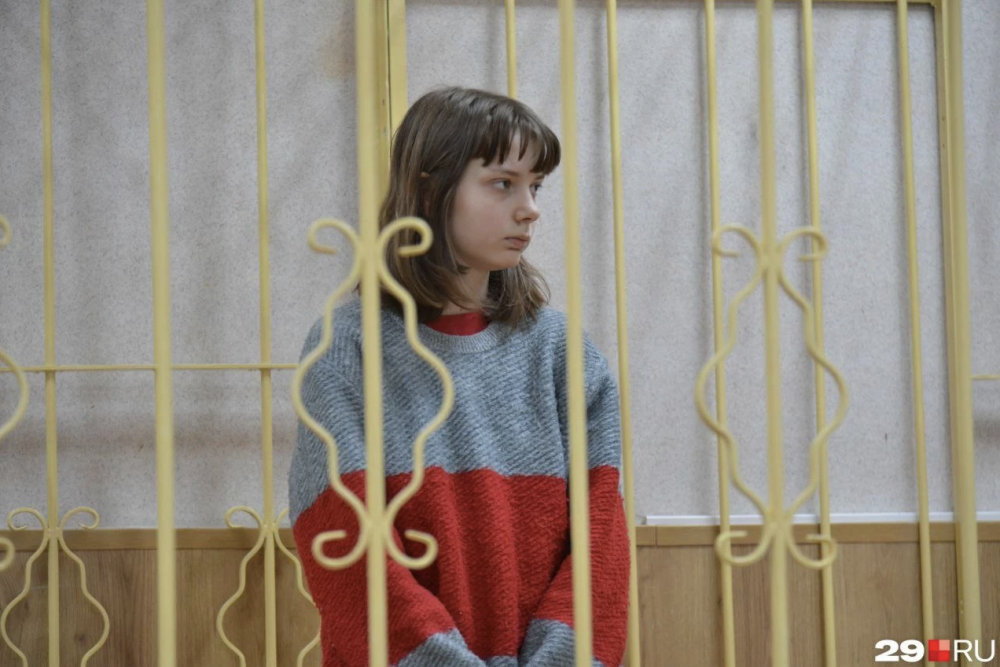 Olesya Krivtsova in the Primorsky district court in Arkhangelsk on January 4. Photo courtesy of 29.ru

A court ruling places Olesya Krivtsova under house arrest until her trial comes up.
Read in Russian | Читать по-русски
By

The 19-year-old student with Russia’s Northern (Arctic) Federal University (NArFu) in Arkhangelsk is charged under the new extremist laws for discrediting the Army and justifying terrorism.

It was in December a criminal case against Olesya Krivtsova was initiated after she reposted a message in a student chat on Vkontakte about the explosion in the Crimean bridge. She was allegedly critical to Russia’s ongoing unprovoked war on Ukraine.

On December 26, the apartment of the second-year student was searched. The teenage girl was handcuffed and brought in for interrogation.

She was not put in pretrial detention but got restrictions on movements, the use of the internet and other means of communication, local news online 29.ru reported.

On January 3, she was detained during a walk and brought in for interrogation, allegedly because some unknown person had bought tickets in her name with the intention to make it look like she wanted to leave the country.

In a court session that lasted for six hours on January 4, Krivtsova explained that she had no intention to leave, her passport was damaged, and the ticket bought in her name was a setup.

The judge decided to place her under house arrest at her mother’s apartment in the nearby city of Severodvinsk until the trial comes up.

If found guilty of discrediting the Army and justifying terrorism, the 19-year-old student risks up to seven years in jail.

Amnesty International has called Russia’s new extremism laws a “which-hunt” and an effective way of “weaponizing the country’s criminal justice system” with the aim to prosecute anti-war protesters.