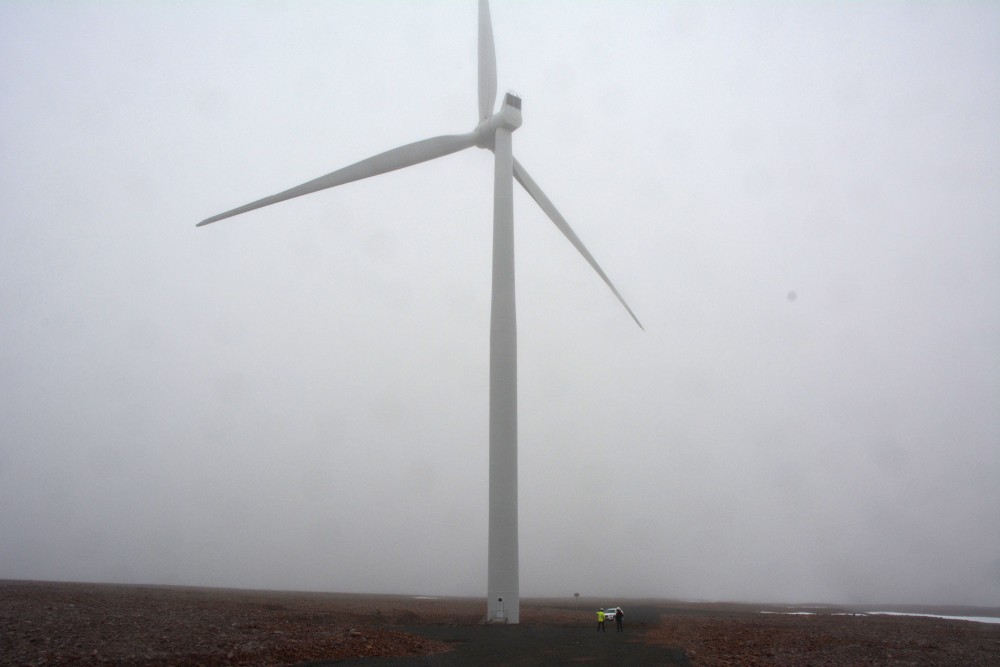 Opinions on the impact of a planned test field for wind power on Uljabuouda Fell, Sweden, are divided.
Read in Russian | Читать по-русски

According to the power company Skellefteå Kraft, the wind farm will strengthen Arjeplog’s reputation as a cold-climate test area. According to the local property owners, the field will bring an uglier scenery and disturbing light conditions and noise to the area. The result will be increased disturbance to reindeer herding, says the reindeer herders’ Maskaure Sámi Village.

Skellefteå Kraft AB has applied for changes in the licence the company has for its wind farm on Uljabuouda Fell.

At present, the permit allows the company to run twelve wind turbines, each with a maximum height of 125 meters. Now the company wants to develop, together with Vattenfall and other partners, the wind farm into a test field that will contribute to the development of wind turbines, element systems, components and sensors suited for a cold climate. There is no such a comprehensive test field in Europe.

In accordance with the application, the company wants permission to dismantle some of the existing wind turbines and replace them with new ones. It also wants to change the maximum total height of the turbines from the present 125 meters to 330 meters.

According to Skellefteå Kraft, the turbines can largely be operated within the framework of the present licence. As concerns noise and the natural environment, the company considers the impact of the changes in operation as insignificant. The landscape will change, but the company considers the impact from small to moderate, writing in the application that the effects are assessed as small because they only apply to a small number of people.

As concerns lighting, there will be a visible change. Today, each wind turbine is equipped with a blinking red light of intermediate intensity. However, turbines that exceed the height of 150 meters must be equipped with a blinking light of high intensity. According to Skellefteå Kraft, the impact of the new lighting is assessed as limited because of the long distance between the turbines and habitation.

As concerns reindeer husbandry, Skellefteå Kraft states that the wind farm brings it negative effects today but that, compared with the present operational situation, the change will just increase them slightly.

However, this view is not shared by the Maskaure Sámi Village, which expressed their concern for an increased negative impact in consultations earlier. According to the herders, the problems that the wind farm creates today will be exacerbated as a result of increased operations.

In the consultations, the herders even took up the psychosocial situation. A representative of the Sámi Village was concerned for the herders’ possibility of continuing reindeer herding in the area, but also about the Uljabuouda Wind Farm contributing to a development where more wind turbines could be erected in other herders’ villages.

The municipality of Arjeplog says that the place-specific resources such as the geographical area and the cold climate, as well as researched natural and cultural landscape should contribute to sustainable development and growth; futhermore, the municipality states that the initiative of establishing a research station for renewable energy is in line with such a development.

The permanent inhabitants of the village Bellonäs have criticized the plan in a letter to the executive board of the municipality.

“Skellefteå Kraft has profited on the construction of hydroelectric power in Arjeplog without paying for it, making Skellefteå the richest municipality in Sweden at the expense of Arjeplog.

You are now planning to give away our great scenery and natural environment for free. We who live in the municipality might feel slightly better about this if we got something, for example cheaper electricity, as compensation.”

The Stibma Road Maintenance Association is also critical to the plan, saying that the description of the environmental impact that the first licence for a wind farm on Uljabuouda was based on was incorrect. The association also states that damage has already been done, but demands that a new decision request that the noise level should be monitored through measurements that include the noise of adjusting the turbines to the wind direction. The association also demands that the sycronization of the lights of the turbines function.

The 27th of December 2018 was the last day for submitting statements on the issue to the Environmental Permit Office of the County Administrative Board.

This story is originally posted by Arjeplognytt and translated and re-published as part of Eyes on Barents, a collaborative partnership between news organizations and bloggers in the Barents region