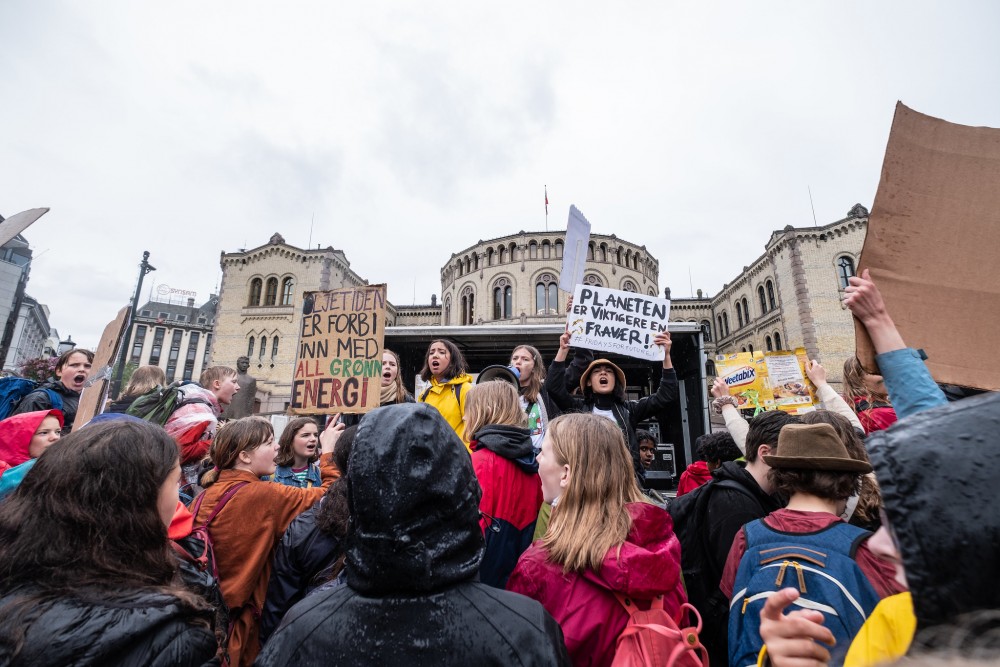 Climate strike in front of the Storting. Photo: Nature and Youth

Environmentalists say government neglects not only the young protesters, but also professional advice of leading experts.
Read in Russian | Читать по-русски
By

Forty thousand children and youth from all over Norway took part in last Friday’s country-wide rallies against climate change. Rapid action is needed to halt the aggravating global warming, the youngsters demanded as they lined up in front of town halls and government buildings across the country.

The protest was part of the international FridayForFuture initiative originally started by activist Greta Thunberg.

Only few days later comes what environmentalists see as a rude response from government. The Norwegian Minister of Petroleum and Energy on Tuesday announced that it is ready to award oil companies another 90 exploration licenses, among them as many as 46 in the Barents Sea.

«The expansion of the APA-area [Awards in Predefined Areas] is important to ensure effective exploration of larger parts of the Norwegian Continental Shelf, including the Barents Sea,» says Oil Minister Kjell-Børge Freiberg. «The expansion will give the companies access to new opportunities that can enable value creation, employment and technology development,» he underlines in a statement.

Environmental organization Nature and Youth is strongly critical towards the new drilling licenses.

«This is like pissing on the climate-striking youth,» says organization leader Gaute Eiterjord.

«Over the last months, thousands of youth have skipped school to strike because we fear for our future, and our main demand is a halt in oil exploration,» Eiterjord underlines in a comment.

According to the organization, the oil drilling is in violation also with expert advice from leading research institutions like the Marine Research Institute, as well as the Norwegian Environment Agency.

Both institutions have warned against exploration in parts of the area because of vulnerable fish stocks and sea birds.

«The government simply says that it does not care neither about climate, nor about nature diversity,» Eiterjord says.

In a joint report on the 2019 license awards, Nature and Youth and six other environmental organizations demand that government backtracks in its oil policy for the north

«The APA is obstructing green transformation, will increase Norway’s and the world’s climate gas emissions, it will constitute a financial risk and is a major ecological threat because it proposes oil exploration in areas with weak preparedness and in vicinity of very vulnerable areas,» the report says.

Among the organizations behind the document is the Norwegian Coastal Fishing Association.