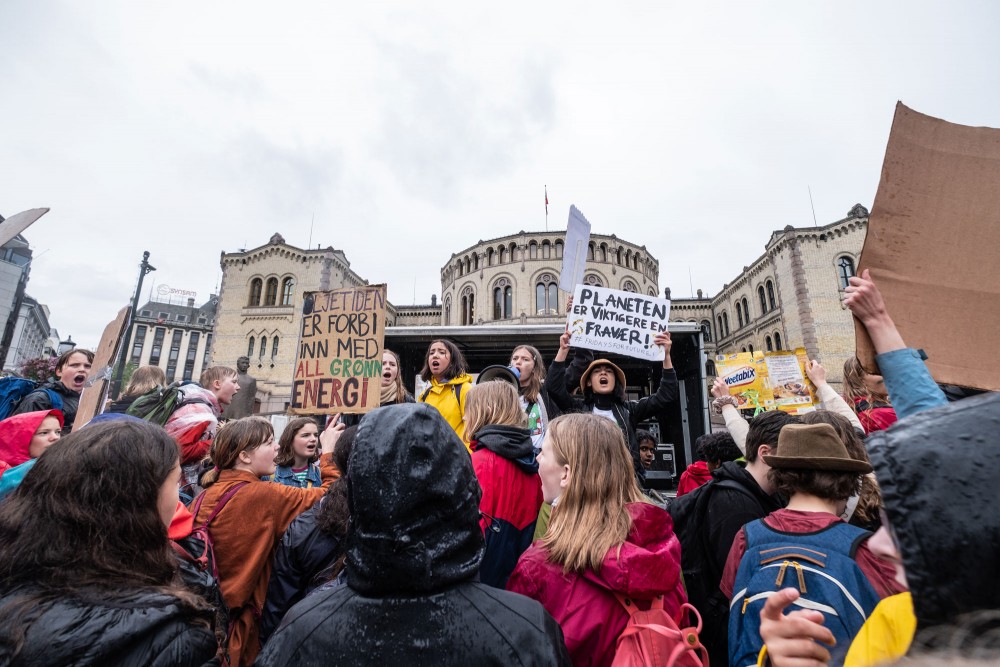 School strike in front of the Storting, the Norwegian Parliament. Photo: Thor Due, Nature and Youth

«I am proud to award 69 new exploration licenses on the Norwegian continental shelf,» said Norwegian Minister of Petroleum and Energy Sylvi Listhaug as she on Tuesday announced this year’s so-called  Awards in Pre-Defined Areas.

Among the licenses are 13 in the Barents Sea, 23 in the Norwegian Sea and 33 in the North Sea. A total of 28 different oil companies are offered ownership interests in one or more of the production licenses.

The new drilling acreage stretches up to 73 degrees North. Equinor, Lundin, Aker BP and Vår Energy are among the biggest winners of new blocks.

According to the minster, a representative of the far right Progress Party, the awards are «important for ensuring employment, value-creation and future government revenue for Norway’s largest industry.»

Hopefully, it will result in new discoveries, Listhaug underlines in a press release issued by the Petroleum Ministry.

The Progress Party representative is known for her controversial stances on key issues, including an open skepticism towards man-made climate change. She was appointed energy minister in late December 2019.

The new license awards are met by harsh criticism from environmentalists.

«We are sick and tires of the ruthless oil awards,» green organization Nature and Youth says.

The environmental organization has been a key stakeholder in the many climate protests held all over the country in the course of 2019.

«After a year when more than 50,000 young people have school-striked time and again with demands for a halt in new oil licenses, the government starts the climate year 2020 with awarding 69 new licenses of which 13 are in the vulnerable Barents Sea,» the organization says in a statement.

Also Friends of the Earth is furious. The organization says the new awards are «a betrayal against the future.»

«This is the decade when the world must cut its climate gas emissions with a half. Australia is on fire and Norway is experiencing temperatures records all over the country. The fact that the government chooses to issue even more blocks to the oil industry shows that they do not understand the seriousness of the situation,» organization leader Silje Ask Lundberg says.

«It is a betrayal against the climate-striking youth and children that are growing up today,» she underlines.

Both Nature and Youth and the Friends of the Earth have joint forces with Greenpeace and the Grandparents’ Climate Action in a law suit against the Norwegian state for its oil drilling in the Barents Sea. The drilling is a violation of the Norwegian Constitution, they argue.

The organizations have also jointly demanded that Norway scraps its system with Awards in Pre-Defined Areas.

The Arctic at risk from plastic