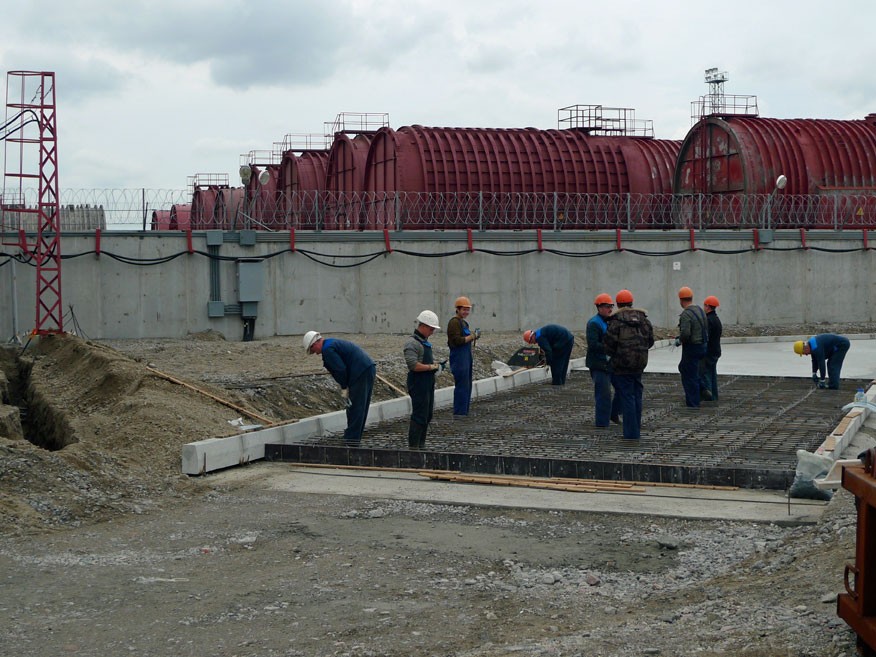 Construction workers at the new storage and processing plant for radioactive waste in Saida Bay. Reactor compartments from submarines behind the fence. Photo: Thomas Nilsen

“The plant is one of the largest international projects in the sphere of global nuclear safety,” says Murmansk Governor Marina Kovtun.
By

The German financed plant for processing; conditioning and long-term storage will handle radioactive waste from both Murmansk and Arkhangelsk regions. The majority of the waste dates back to Soviet times with the decommissioned fleet of Cold War submarines.

The plant is financed by Germany as a part if the G8 Global initiative to secure radioactive material. With a price tag of €174 million, the plant is one of the most modern radioactive waste treatment facilities. In total, Germany has spent more than €300 million in the Saida Bay. From before, a giant storage site for reactor compartments from decommissioned submarines is built. Some 74 compartments are stored today, and more will come.

Murmansk Governor, participating at the opening ceremony on Wednesday, writes in a tweet “This center will almost solve the problem of radioactive waste management, not only in the Murmansk region, but also for the North-West of Russia.”

The Saida Bay plant consists of a module area for receiving waste where the different types of low-, medium- and transuranium waste will be sorted. Secondly, there is a workshop for processing the waste in order to reduce the volume before it enters the module for packing into new containers suitable for long term storage.

The waste will be shipped in to the plant in Saiday Bay from Andreeva Bay, Nerpa shipyard, Atomflot icebreaker base, Gremikha naval base and the two lagre submarine yards in Severodvinsk near Arkhangelsk.

Transport of solid radioactive waste from Andreeva Bay to Saida Bay has already started. Recently, two voyages with a total of 20 containers were taken to the new facilities by the special purpose built “Rossita” vessel, reports News from Murmansk and Murmansk region.

Russia has not taken any decision on where a final repository for radioactive waste will be established. Last week, county officials in Arkhangelsk Oblast decided to go ahead with the plans to create such repository on Novaya Zemlya in the Arctic. A final decision, to be taken on the Federal level, is expected to come after 2017.