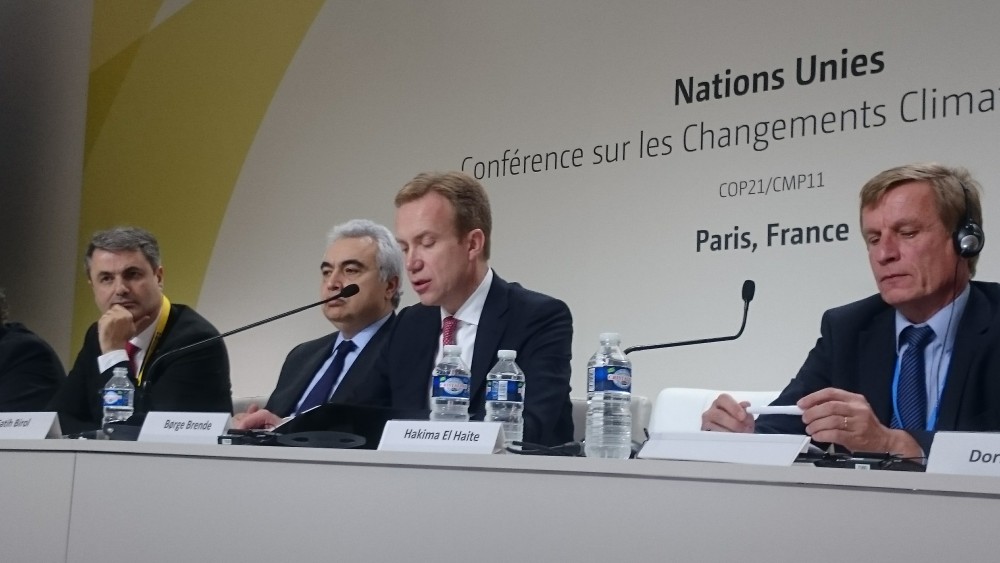 PARIS. Countries need to start removing subsidies on fossil fuels if climate finance is to be productive.
By

Fossil fuel subsidies and climate change is the topic of one of the first side events during the second week of the climate conference (COP21) in Paris. The panel of representatives from nine different countries accounted for their experiences of climate finance and underlined the need for removing subsidies on fossil fuels in order to create a constructive environment for reducing greenhouse gas emissions.

Today, the subsidies on fossil fuels, amounting to US$ 500 billion per year, are more than ten times greater than the cost of carbon pricing mechanisms. “This represents a stunning market failure”, says Scot Vaughan, president of the International Institute for Sustainable Development.

With the establishment of the Green Climate Fund in 2011, parties have agreed that US$ 100 billion will be mobilised by 2020 to fund mitigation and adaptation initiatives in developing countries. “To me it’s a great paradox that the carbon subsidies amount to five times that value”, says Børge Brende, the Norwegian Minister of Foreign Affairs.

Subsidising fossil fuels stands in great contrast to the very key goals of the negotiating parties at the COP21. In the INDCs. improvement to energy efficiency and increased use of renewable energy stand out as ambitions to which a majority of countries are committing to, goals which as not compatible with the current subsidies on fossil fuel. Not only do the subsidies create an unfair competition between fossil fuels and renewable energy, thus undermining the development of renewable, but the low price on fossil fuels allows for wasteful output of carbon emissions.

Instead, the panel insists that countries should do more to reduce the use of carbon and Vaughan points to that the loss of carbon emissions from the removal of subsidies would represent as much as 12 % of the global abatement needed to achieve the goal of no more than 2 degrees temperature rise. “All countries should explore opportunities to remove subsidies”, according to Brende.

Ibrahim Baylan, the Swedish Minister for Energy, underlines the economical gains of decarbonising the economy, pointing to the fact that the Swedish economy has continued to grow as the greenhouse emissions have been reduced.  “Leading the way towards a fossil free society is not only morally right, it is also economically smart”, he says.

Enhancing carbon pricing instead of carbon subsidies has many positive side effects. In 1990, Norway was one of the first countries to introduce a carbon tax, which proved to have a positive impact on the development of the renewable sector. “It has spurred investments in renewable energy”, says Brende. Both the Norwegian and Swedish ministers also underline the positive impact on social welfare, both by improving the budget of other areas and by reducing the negative health impact of air pollution.  “It is money that can be put to better work”, says Brende, suggesting that the ideal scenario would be to have a global tax on CO2. However, the minister is thinks it would be too optimistic to expect substantial cuts in subsidies from this meeting .