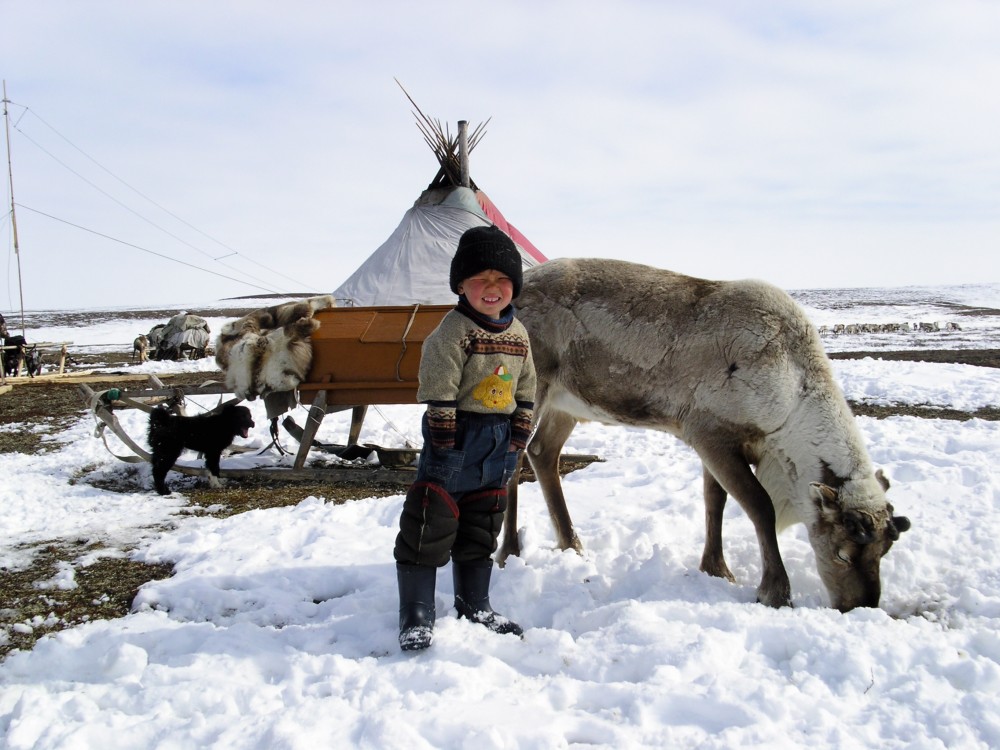 A proud Nenets boy with his reindeer on the tundra. Photo: Thomas Nilsen

Russia’s important natural gas industry on the Yamal Peninsula is threatened by suddenly appearing huge sinkholes. Are the grazing reindeers of the Nenets people to blame?
By

The first sinkholes started to appear on Yamal in 2014. Looking like meteorite craters, the sinkholes drew Russian and world media attention. The largest were several tens of meters deep and up to 60 meters in diameter.

Last winter, eight new sinkholes were discovered near the giant Bovanenkovo gas field on the Siberian Arctic peninsula. Those sinkholes triggered alarm bells in the offices of Gazprom, Russia’s stateown natural gas giant that has invested billions in developing the Bovanenkovo field. The field is estimated to hold 4,9 trillion cubic meters of natural gas, way more than the once upon a time famous Shtokman-field in the Barents Sea.

Infrastructure could be in jepoardy as more sinkholes appears.

Now, scientists at Tyumen State Oil and Gas University have a theory that reindeer overgrazing of the vegetation can explain the sinkholes. The university is a partner with Gazprom.

This week, Academican Vladimir Melnikov with the university made it to national TV with the new theory.

“There was a grass and lichen cover on the Yamal Peninsula. But with increasing number of reindeer, the [vegetation] gets overgrazed. The reindeer are eating too much. No moss, no cover to reflect [sunshine] from the soil surface,” he said interviewed by Vesti.

Melnikov is studying the impact of the sinkholes and works in a team of researchers trying to understand the reason for the sudden appearance of the craters on the Russian Arctic tundra.

See more spectacular photos of permafrost sinkholes in this article by The Siberian Times.

On Yamal, the Nenets and Khanty indigenous peoples hold about 500,000 reindeer. They have been here for at least 1,000 years moving seasonally along ancient migration routes together with the reindeer.

While on the move, they encounter gas pipelines, a new railway line crossing the peninsula to the Bovanenkovo field, drilling towers and tarmac roads.

The local Yamal conflict of interest between Gazprom and the indigenous peoples is obvious.

For the world, scientists fear that the new sinkholes are just the beginning of enormous releases of methane climate gases that today are kept in the permafrost.

We can be witnessing the start of the dangerous tipping point for the global climate.