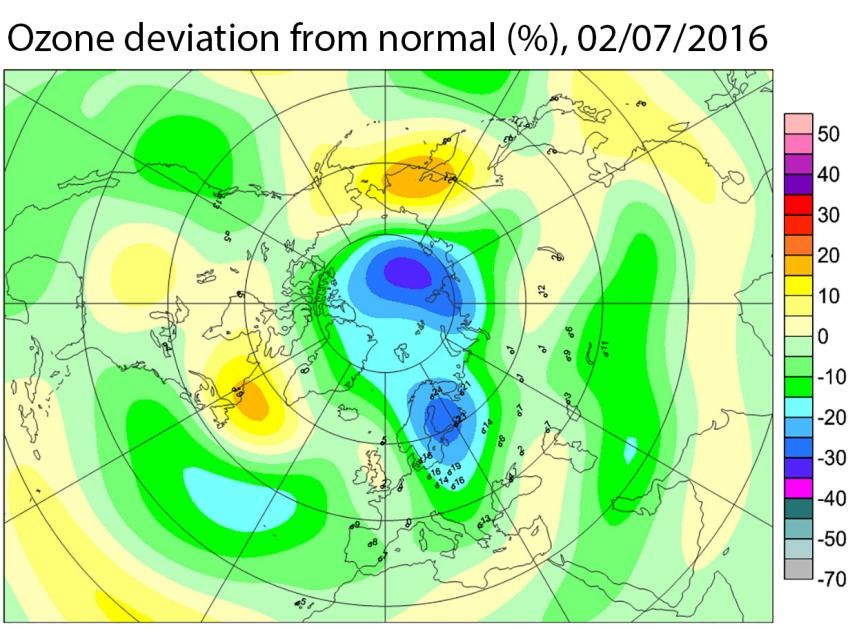 A hole in the ozone layer is opening up in the Arctic. Map: Environment Canada

Cold air and old atmospheric pollutants have created an unusually deep hole in Earth’s protective ozone layer over the Arctic, scientists warn.
By

A hole the size of Greenland in the ozone layer over the Arctic threatens to grow even larger this spring as a blast of cold weather combines with returning sunshine and lingering air pollutants.

Atmospheric scientists are analyzing data from weather balloons and satellites for clues to how the ozone will behave when sunlight—a third factor in ozone loss besides temperature and pollution—returns to the Arctic in the spring.

According to Science magazine, a record low temperature in the Earth’s upper atmosphere could release chemicals which destroy the layer. Ozone is a gas composed of three oxygen molecules which can be hazardous to our health on the ground, but in the upper atmosphere it protects us by soaking up ultraviolet radiation from the sun.

The extent of the hole above Canada was revealed in 2011. In extended cold periods, like the Arctic winter, the hole can become enlarged.

Ross Salawitch, an atmospheric chemist at the University of Maryland, College Park, says to Science Magazine that the health hazards shouldn’t be sensationalized. “The worst-case scenario would be folks in high northern latitudes being in a type of ultraviolet environment that people are exposed to all the time in San Diego.”

For Salawitch, the bigger question is what role climate change might be playing. The polar weather is the main factor determining how much ozone is destroyed each spring, he says. But climate change is also expected to cool the stratosphere over the long run. The same greenhouse gases that trap heat in the lower atmosphere allow the stratosphere to more effectively radiate energy into space.

“The mechanisms that regulate the temperatures of the Arctic stratosphere, however, are complicated and not fully understood,” says Markus Rex, an atmospheric chemist at the Alfred Wegener Institute in Potsdam, Germany.