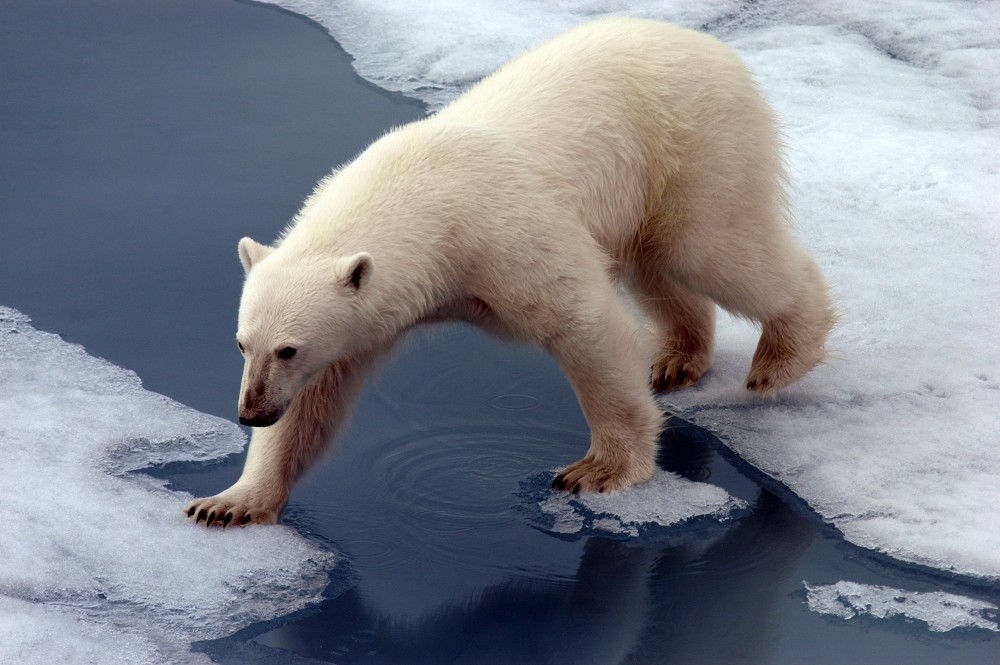 A polar bear walking the sea-ice in the Hinlopen Strait east of Spitsbergen. Photo: Thomas Nilsen

What Fitbit-like devices tell us about polar bears

To survive the harsh conditions of the Arctic, polar bears roaming Alaska’s Beaufort Sea coastline subsist on the equivalent of about one adult ringed seal every 10 days and, to make those fatty calories last, spend most of their daylight hours lounging around on the ice and snow, new research shows.
By

Beaufort Sea polar bears equipped in 2014 and 2015 with Fitbit-like devices and neck cameras revealed their daily routines to scientists studying their food needs.

Data from the seven adult female bears tracked in the springs of 2014 and 2015 showed they spent, on average, about 70 percent of daylight hours resting, the U.S. Geological Survey-led research has found. They spent only about 15 percent of their time walking, the research found. The rest of the time was divided among swimming, grooming, eating, interacting with males and other activities.

Despite their low levels of exercise, the bears need to consume a lot, said Anthony Pagano, the USGS research biologist who is leading the study.

“The biggest thing right now is that polar bears really require a considerable amount of energy to meet their demands,” said Pagano, who is focusing on polar-bear energetics in his pursuit of a doctorate at the University of California at Santa Cruz.

What they eat and where….

Over the time periods used — eight to 11 days in the spring of 2014 and a similar period in 2015 — three of the polar bears were successful at catching and eating ringed seals. The other four had to make do with meat scavenged from old carcasses, or they didn’t eat.

The findings give weight to the hypothesis that it will be very difficult for polar bears to switch to land-based foods like eggs and birds should sea ice diminish to the point where they cannot hunt their normal seal prey, said Pagano, who presented preliminary findings at last month’s Alaska Marine Science Symposium.

Could polar bears switch to such foods and still thrive? “It’s going to be pretty unlikely, I think,” Pagano said.

Seals are big sources of fat and calories when compared to eggs or birds, he said. Polar bears do not have to spend a lot of their energy catching seals, he said. When they are hunting on ice, polar bears can rest at a breathing hole “until a seal pops up,” he said. But hunting land-based game, if they had to do that for food, would likely require a calorie-spending chase, he said.

The importance of rest

The new data adds to earlier evidence that polar bears spend a lot of their time resting, Pagano said. The video footage recorded by the cameras put on the bears’ necks captured them doing other things as well — swimming in the icy water to pursue seals, eating meat and interacting around males that were potential mates.

Pagano says he expects the work to continue in the spring and will include getting more information on the polar bears’ energy needs and expenditures over entire 24-hour cycles.