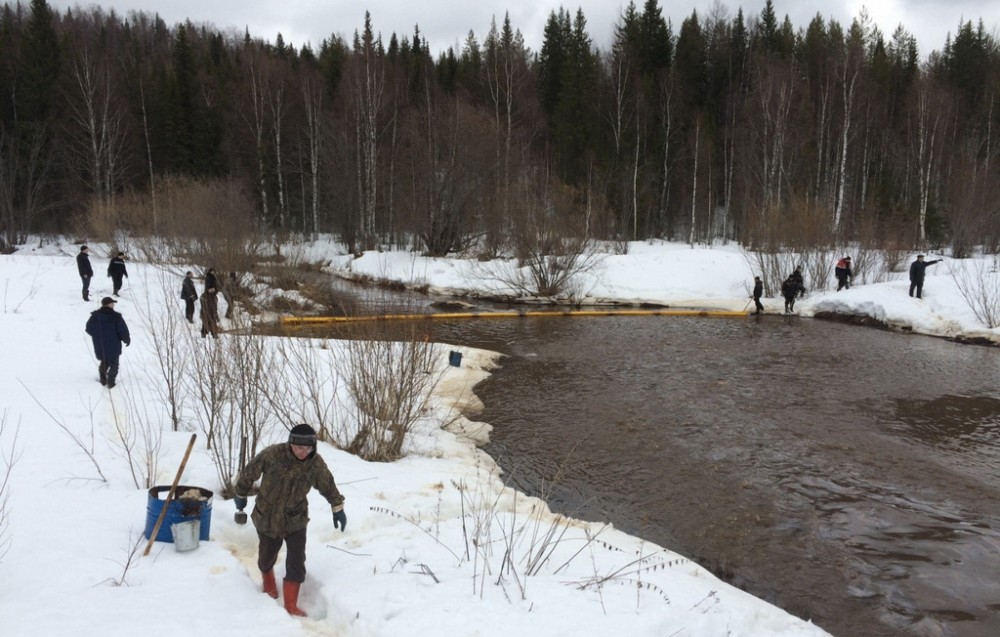 A clean-up team has been sent to the affected areas. Photo: Rkomi.ru

A state of emergency must be declared around the affected parts of the Ukhta river, environmentalists in the Komi Republic say.
By

According to Greenpeace, the volumes of oil spilled into the Ukhta river could amount to more than 100 tons, 7x7-journal reports.

The spill was reported to the authorities on 8th April, whereupon clean-up personnel from the responsible companies were sent to the site.

Big parts of the river is still covered by ice, 7x7-journal reports.

Committee Save the Pechora, an environmental group, now call on regional authorities to declare a state of emergency in the area. The Committee is requesting regional Minister of Roman Polshvedkin and Ukhta city Mayor Aleksandr Busyrev to deal with the situation.

Governor of the Komi Republic on Monday announced that he is taking taking control of the process connected with the spill, a press release from his administration reads. According to the regional leader, a team of 18 people now work on site. Among them are representatives of Lukoil-Komi, the biggest oil company in the region.

The oil could come from an old exploration well abandoned in the period 1932-1950, the Komi Government says.

The 199 km long Ukhta River is a side stream of river Izhma, which again is connected with the great river basin of Pechora. It is located in the area of extensive oil production and has repeatedly fallen victim of spills.

According to Committee Save the Pechora, at least four spills have taken place in the area only this year.