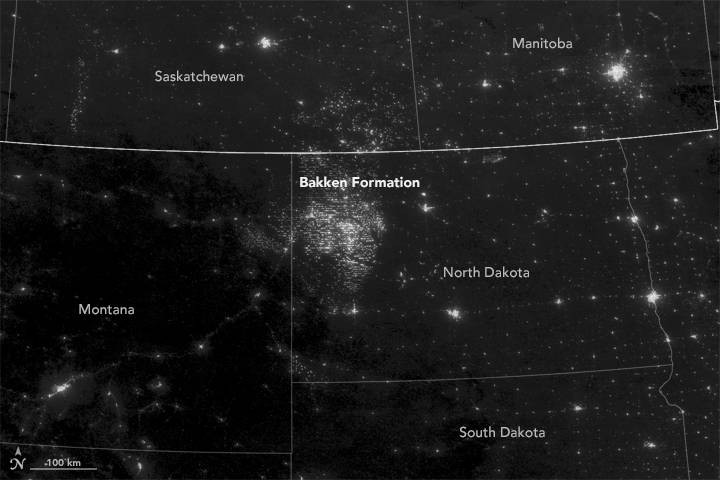 Flaring of waste natural gas from industrial oil fields in the Northern Hemisphere is a potential source of significant amounts of nitrogen dioxide and black carbon to the Arctic, a new NASA study shows.
By

Nitrogen dioxide is a well-known air pollutant and health hazard, and black carbon, also known as soot, is an agent of global warming that is critical for understanding climate change effects in the Arctic.

In addition to absorbing sunlight while aloft, which heats the air, black carbon darkens white snow and ice when it settles on the surface, accelerating snowmelt.

Although there are currently few sources of black carbon emissions within the Arctic, that is likely to change as human activity in the region increases.

Previous researchers suggested gas flares from oil extraction in countries near the Arctic to be important sources of black carbon. Gas flares are an often-overlooked subset of industrial emissions in the reported inventories, which are difficult to compile and are known to have gaps in their data that lead to over- or underestimates of pollutants. Regional estimates in Russia, for example, suggest gas flaring may account for about 30 percent of all black carbon emissions, said Joshua Fu, an atmospheric modeler at the University of Tennessee at Knoxville, to NASA.

There are few monitoring stations near flaring sites globally, so the scientists have had to turn to satellite view to find the sources of pollution.

For each site, the scientists compared the gas flares’ signals from the night lights with nitrogen dioxide satellite data.

“We found a pretty good match-up between the gas flares’ signals from the night lights and the nitrogen dioxide retrievals for two regions, Bakken and the Canadian oil sands,” said Can Li, lead author for the team. They saw a smaller rise in nitrogen dioxide at the Russian site in western Siberia, and no discernable flaring signal from the well-established oil rigs in the North Sea, which Li said is likely due to the abundance of nitrogen dioxide pollution in nearby Europe that obscures the pollution signal from the flares.

For the two North American sites, however, the trend in the nitrogen dioxide data was clear. Every year from 2005 to 2015 its levels rose about 1.5 percent per year at Bakken and about 2 percent per year at Athabasca. This means that the concentration of black carbon, produced by the same flames, was also likely on the rise, said Li.

The results were published in March in Atmospheric Environment.