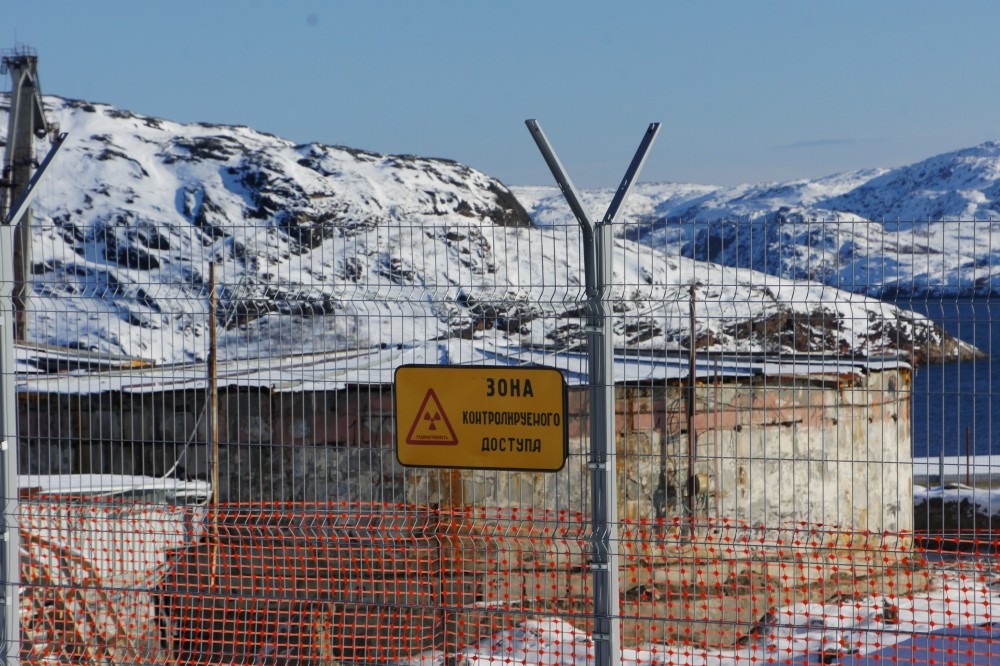 Workers are about to complete the handling infrastructure for partly damaged spent nuclear fuel at Russia’s Andreeva Bay.
Read in Russian | Читать по-русски
By

About 22,000 spent nuclear fuel elements from operation of Soviet’s fleet of submarines are stored in three dilapidated concrete tanks a few hundred metres from shore on Russia’s Barents Sea coast. That is equal to around 100 reactor cores.

No other places in the world are so huge amount of highly radioactive uranium fuel stored under such bad conditions.

Removing the waste-elements is considered to be the most risky nuclear-safety operation ever to happen in the Russian north.

“Works on the spent nuclear fuel is expected to begin in late 2016,” says nuclear safety expert Andrey Zolotkov with the Bellona Foundation. Based in Murmansk, Zolotkov has many decades of experience in handling spent nuclear fuel from the civilian nuclear powered icebreaker fleet before he started to work for the environmental group.

“I think the removal of spent nuclear fuel from Andreeva Bay will not start earlier than spring 2017, because first the fuel will have to be repacked to transport containers,” Zolotkov explains.

The storage site in Andreeva Bay, located in the Litsa fjord some 55 kilometres from the border to Norway, was built soon after the Soviet navy got its first nuclear powered submarine in the early 1960s. A pool type storage, given the code-name Building No. 5, had a leakage in the early 80s and the lethal fuel elements were urgently transferred to the three dry storage tanks. Supposed to be temporary, the totally run-down tanks have now served for more than 30 years.

Nils Bøhmer, nuclear physicist with the Bellona Foundation in Oslo, hopes for the best, but fears the worst.

“With the current economic crisis, it is not for sure that this work will be given priority by the Russian Government. We fear it will be made compromises on safety to make the work as cheaply as possible,” says Bøhmer.

Due to high levels of radiation, lifting of the old uranium fuel elements out from the tanks and into new transport containers will be done by remote operated equipment.

Internation donors should oversee the work

Nils Bøhmer calls for all donor nations that have assisted with infrastructure should come and review safety measures during the removal process.

The clean-up of of Andreeva Bay is being financed through grants from the framework of Northern Dimension Environmental Partnership. Partner governments, like Norway, the European Commission and other donors have contributed with huge amount of money.

The world understands the urgency of securing the nuclear waste dump.

Andrey Zolotkov says the question about urgency is important, but not most important.

“The main thing in these operations is safety. And work should not begin until you are sure it complies with all safety standards. It has to be planned precisely for all details,” he elaborates.

Neighbouring Norway is pleased with the work now starting

Head of Radiation Protection Authority, Ole Harbitz, says in an email to the Barents Observer that the work is very complicated.

“We are very pleased to see that there are concrete plans to start removing spent nuclear fuel from the Andreeva Bay. From Norwegian side we have contributed with competence and resources to facilitate for the work to be carried out in a safest possible way,” Harbitz says.

“The work is very complicated and several international players has worked closely with the Russian partners. The dialogue is good,” he says.

Ole Harbitz, however, underlines that it is the Russian side that is responsible for the waste, implementation and overseeing safety and security of the work now to be carried out.

Five years - if all goes well

Andrey Zolotkov in Murmansk estimates it will take at least five years to transport all 22,000 fuel elements from Andreeva Bay to Atomflot in Murmansk.

“It is necessary to transport more the 400 containers, equal to about 37 trains, with spent nuclear fuel,” Zolotkov estimates. In practice, that means a train with four wagons will go more or less in shuttle between Murmansk and the South-Urals constantly in the coming years.

Unforeseen challenges could delay the plans, according to Andrey Zolotkov. “The preparation for the work to start took nearly 15 years,” he says.

In Andreeva Bay, work on infrastructure, such as roads, power supply, piers, a roof over the tanks, sanitary buildings and other measures have been going on since the late 90s.

Italy has financed and built a special designed vessel, “Rossita” that will sail in shuttle between the Litsa fjord and the Kola Bay where Atomflot, the service base for Russia’s nuclear powered icebreaker fleet is located. Being lifted onshore, the containers are to be placed in special-designed rail-wagons going to Mayak in the South Urals where a reprocessing plant is located.

Rail transport through half of Russia

Andrey Zolotkov is confident safety is not in jeopardy during rail transport. “The containers are 40 tons and will remain tight even if dropped from certain height or exposed to fire,” he says and point to the fact that such spent nuclear fuel transportation through the city of Murmansk by rail have been going on for many years already.

With rail, it takes days to reach Mayak in the South-Urals. The nuclear cargo train practically has to drive through half of Russia.

Problem solved, or maybe not?

Problem solved for Andreeva Bay does not make the problem to disappear.

Mayak, where the spent nuclear fuel will be shipped is infamous for being one of the most radioactive polluted places on planet earth.

“Legacy of reprocessing spent nuclear fuel at Mayak has been a heavy burden for many generations. It is a big injustice for the local people,” says Ph. D. Natalia Mironova to the Barents Observer.

Mironova is a former Member of the Regional Parliament in Chelyabinsk, the nearest larger city to Mayak. She has protested against the reprocessing since the first knowledge about pollution became public in late Soviet times.

“Reprocessing is dangerous. We have bad experience in handling liquid radioactive waste,” she explains. Mayak was the location of the Soviet Union’s first production reactor for plutonium to nuclear weapons and has a bad record of serious accidents and large outdoor dumpsites for nuclear waste.

The reprocessing plant that now will treat the Cold War legacy from Andreeva Bay was built in 1977. Little is known about today’s safety records at the plant.

At the plant, the spent nuclear fuel rods will be dissolved in a liquid chemical process, where the remaining uranium and plutonium in the fuel is separated out, while other isotopes, like lethal strontium and cesium are treated as highly radioactive waste in liquid form.

No final disposal site is built for the waste accumulated from the reprocessing plant in Mayak.

Natalia Mironova does neither support reprocessing nor the upcoming shipment of spent nuclear fuel away from the Kola Peninsula.

“Transportation is a risky process. Minimization of the risk is best strategy. Safe storing with less transport and far away from Mayak would be the best strategy,” she argues and says other countries have chosen better options.

“This is deeply worrying, and we can just hope that the Northern Fleet has lessons learned from the Andreeva Bay. If not, we are likely to face a similar challenges within a decade or two,” he says.