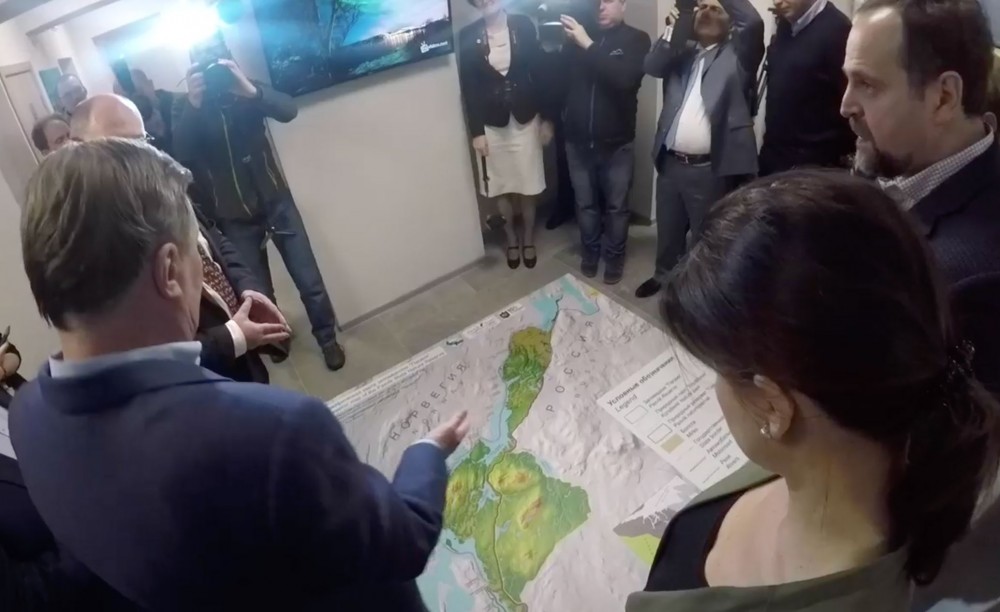 Sergey Ivanov (front left) asks why the Norwegian part of Pasvik Nature Reserve is not included in the new map. To the right, Minister of Natural Resources and Environment Sergey Donskoy. Screenshot from video by Bloger51.com

«Why is not the Norwegian part included?» Putin’s former Chief of Staff, Sergey Ivanov, asked when shown the new map of the joint Norwegian-Russian Pasvik Nature Reserve.
Read in Russian | Читать по-русски
By

Christiansen has cooperated with Russia on cross-border environmental issues for more than two decades, including matters concerning the bilateral nature reserve in the Pasvik valley. Established in 1992 on the Russian side and 1993 on the Norwegian side of the border, the nature reserve covers and area of 166 square kilometers.

«We have been told an invitation would come for the January opening. When it didn’t come, I thought [the centre] was not yet ready for opening,» she says.

At the ribbon cutting ceremony, both Minister of Natural Resources and Environment Sergey Donskoy and President Putin’s special envoy on environment Sergey Ivanov were introduced to Pasvik Nature Reserve [zapovednik] and shown a big map of the area. The map, however, only included the part of the nature reserve that is on the east side of the Pasvik River.

Walking over the map on the floor, Sergey Ivanov started to wonder. «Norway also has a part of this, yes?» he asked and pointed to the white-outed area of the map.

«Then why is not the Norwegian part included? I would have included also that part. This is our part, and that is their part, after all it is all part of a common area, is a transborder area,» Ivanov said.

Then he symbolically walked across the border on the map and smiled «It should be added.»

On the Russian side, Pasvik Nature Reserve is located within the Border Security Zone, an area well known to Sergey Ivanov. In the position as Minister of Defense, Ivanov said at a visit to Oslo in 2006 that the border guards control between the two countries could be reduced, NTB reported at the time.

Ivanov has his background from the foreign intelligence branch of the KGB and speaks Scandinavian languages. In addition to holding the position as Minister of Defense for six year, he has been First Deputy Prime Minister, Chief of the Security Council and until August last year Chief of Staff in Vladimir Putin’s Presidential Administration.

Sergey Ivanov is today one of a few individuals sanctioned by United States, but not by the European Union and Norway, for involvement in the Ukrainian crises.

Pasvik Nature Reserve has another ecological centre in the village of Rayakoski, but since this one is located inside the border zone, sealed off by barbed-wire fence. Visitors do have to apply for special entrance permission from the FSB long time in advanced.

The new visitor centre is in the town of Nikel and will be open to all visitors. The centre is sponsored by Norilsk-Nickel.

The smelter in Nikel has for decades been on top of the agenda in political meetings between Russia and Norway. The plant is not only a major polluter on the Russian side, but also a serious source of pollution for neighboring Norway.

In a recent bilateral meeting, Sergey Donskoy confirmed to Vidar Helgensen, the Norwegian Minister of Climate and Environment, that the Nikel plant will be part of a pilot project on the introduction of so-called best available technology (BAT) in the country’s industry.

Vidar Helgensen told the Barents Observer that he is «following up with dialogue with the company and Russian authorities» and that environmental monitoring in the border areas remains a priority.

«It is important to monitor whether the announced measures actually are implemented and give improvements», he underlined.

Mayor Rune Rafaelsen of Sør-Varanger municipality, where the Norwegian part of Pasvik Nature Reserve is located, was not either invited to the Tuesday opening of the environmental centre. Rafaelsen has earlier said that his municipality is seriously worried about what happens and what consequences the pollution from Nikel will have for people and nature in the border area.

«Norway’s biggest environmental problem is here in the border area. The factory in Nickel causes serious problems across the border,» Rafaelsen says but will not speculate about why nobody from Norway were invited to the high-ranking opening ceremony at the Russian visitor centre this week.

Mayor Rafaelsen will meet Russia’s Minister of Natural Resources and Environment Sergey Donskoy in Oslo in June when the annual meeting of the joint Norwegian-Russian environmental commission takes place.

A Norwegian environmental research and visitor centre opened at Svanhov on the Norwegian side of the border in 1993 aimed at facilitating for cross-border environmental cooperation. Noby from the centre were invited to the opening in Nikel.

Snorre Hagen is Head of NIBIO, Svanhovd. He looks forward to cooperation.

«Svanhovd have close contact with our colleagues at Pasvik zapovednik for several years regarding the establishment of a visitor centre in Nikes. I’m very pleased that the centre now is a reality and I think it will give us exciting new opportunities for cooperation,» Hagen says.

With a unique rich birdlife, old-growth taiga forest a fauna at the intersection between western and eastern species, between forest tundra and Arctic tundra, the taiga nature in this borderland has high protection value for all three countries.

Neither officials from Pasvik zapovednik, nor Murmansk Governor Marina Kovtun have replayed to questions from the Barents Observer on why nobody from the Norwegian side were invited to the opening ceremony.

Although not invited to the opening, Bente Christiansen underlines that the cooperation with the trilateral park goes well.