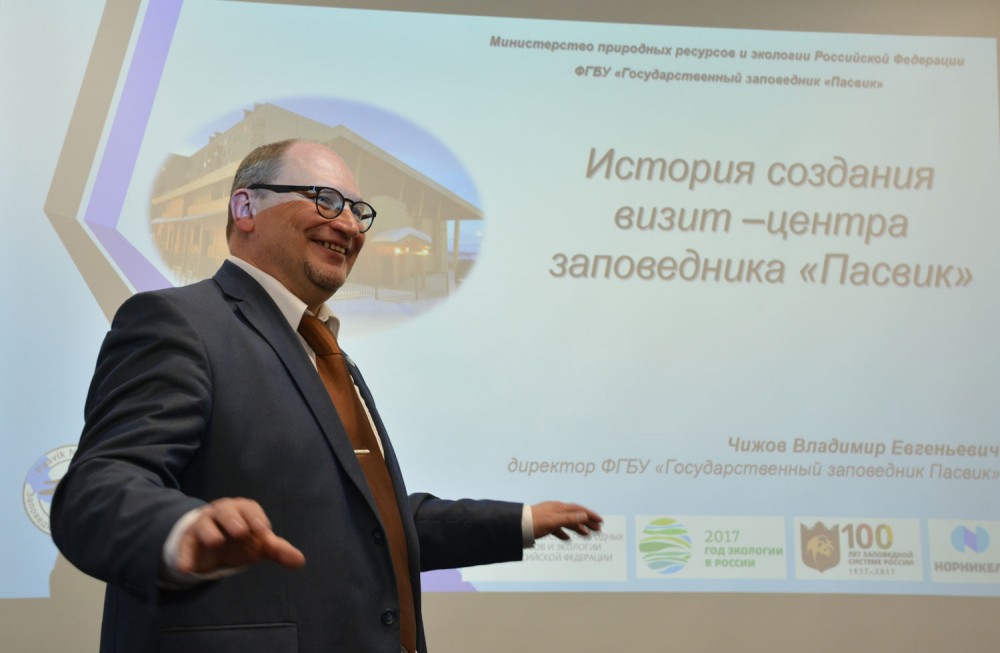 No halt in cooperation on the border between Russia, Norway and Finland. On the contrary - we want more contact, says Vladimir Chizhov as he officially opens the new Visit Center of the Pasvik Nature Reserve.
Read in Russian | Читать по-русски
By

You will notice it once you take off from the main road and enter the Nikel town center. Between Soviet-style apartment blocks, all of which have seen better days, is something out of the ordinary.

The new Visit Center in Nikel has the shape of a cottage-like mountain refuge. But the surroundings are urban. Somewhat inconveniently, the building made of wood and stone lies squeezed into the wall of the next-by housing block.

This is where the managers and researchers of the Pasvik Nature Reserve (zapovednik) have got their new office. And it is more than an office building. The center includes conference facilities, rooms for overnight stays, a cafe and exhibition halls.

«This center opens new opportunities for us all», says Vladimir Chizhov, head of the Nature Reserve. He is a longtime front figure in cross-border environmental cooperation in the area.

«It is an excellent place for Arctic dialogue, both domestically in Russia and for relations with our nearby foreign colleagues», he says to the Barents Observer.

Chizhov proudly shows around in the new facility. A big group of guests, many of them from neighboring Norway, have come to attend the opening.

The Pasvik Nature Reserve (zapovednik) was officially established in 1992 and is Russia’s only protected area of the kind located directly along the national border. The reserve includes a 14,687 hectare area on the eastern bank of the Pasvik River. On the left bank is Norway. A few kilometers to the south is Finland.

All the three neighboring countries have protected nature lands in the area and in 2008 the Pasvik-Inari Trilateral Park cooperation was formalized.

«Our neighboring partners are not only colleagues, but also our longtime friends, we respect each other, even love each other!», Chizhov underlined to the Barents Observer during this week’s opening ceremony.

He is not bothered by the fact that the new center has been financed by Norilsk Nickel, the company which runs the huge and dirty nickel plant in town. Over several decades, the plant has emitted thousands of tons of sulphur dioxide and ruined major parts of local environment.

The idea to build the center appeared in 2011, during the visit of Minister of Natural Resources Sergey Donskoy.

In January this year, Donskoy was back in town. Together with Presidential Envoy for Environment Sergey Ivanov, he visited the brand new center as part of his official launch of Russia’s Year of Ecology 2017.

Vladimir Chizhov can see straight over to Norway from his office window. He stresses the importance of the local cross-border relations.

«While officials on the bilateral top level might not have met lately, we here locally have always had a constructive dialogue and we will continue to work together,» he underlines.

«And if there is a tricky question appearing, then we always manage to handle it in a reasonable and wise manner», he adds with a smile.

That position is echoed by Norwegian representatives. According to Bente Christiansen, head of Environment at the Finnmark County Governor, the political freeze between Oslo and Moscow does not affect cooperation on local level.

«The very close and personal relations continue as before», Christiansen underlines to the Barents Observer.

That same view is shared by Snorre Hagen, head of NIBIO Svanhovd, the environmental center located straight across the Pasvik River on the Norwegian side.

Svanhovd has served as the model for the new Nikel Visit Center. Over many year, Svanhovd has housed a combination of researchers, event organizers and international guests.