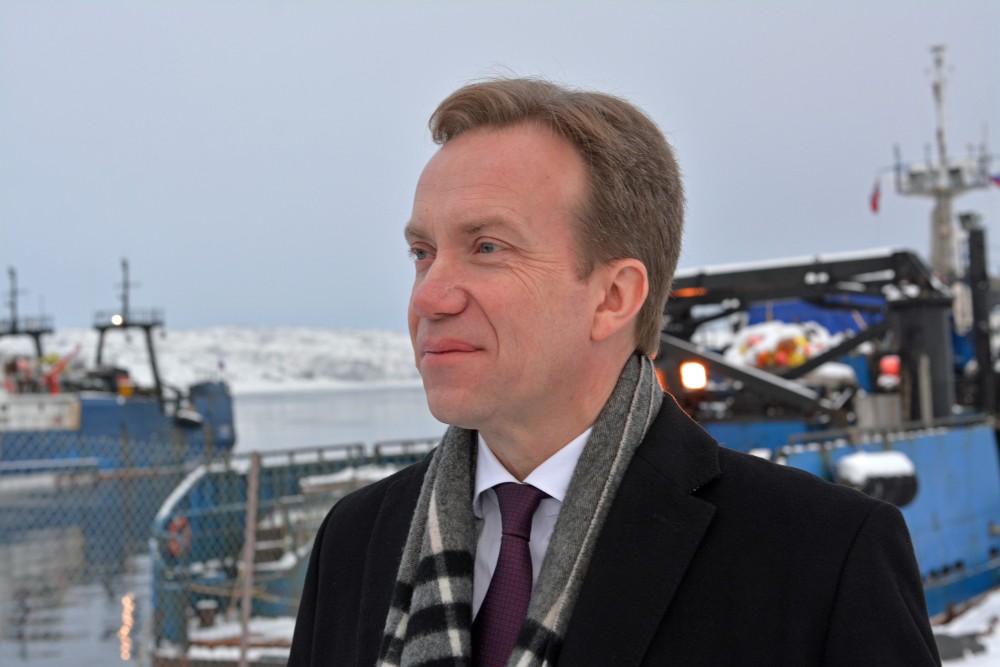 «When not everything else works, we must focus on what really works; environment, nuclear safety. In June I will go to the Andreeva Bay on the Russian side to mark 20 years of cleanup of old nuclear sins,» Børge Brende said with a smile when presenting the foreign affairs focus in the Government’s new high north strategy in Bodø on Friday.

See video-recording of Brende’s and other minsiters presentation here. A link to the Government’s new high north strategy (pdf, in Norwegian) is here.

The visit, to be on June 27th, will also mark the first shipment of spent nuclear fuel out of the old rundown storage site. The first containers with the highly radioactive uranium fuel elements will be shipped from Andreeva Bay in the List fjord, along the coast of the Kola Peninsula to Atomflot base in Murmansk from where it will be sent by train for reprocessing in Mayak in the South Urals.

Nuclear safety cooperation is also one of the highlighted items in the part of the Government’s strategy that includes Russia.

«In a period with more challenges in the relation between Russia and the West the Government considers it especially important that cooperation on different areas of expertise continues at a high level,» the strategy reads.

About 22,000 spent nuclear fuel elements from operation of Soviet’s fleet of submarines are stored in three dilapidated concrete tanks a few hundred metres from shore on Russia’s Barents Sea coast. That is equal to around 100 reactor cores.

No other places in the world are so huge amount of highly radioactive uranium fuel stored under such bad conditions.

Removing the waste-elements is considered to be one of the most risky nuclear-safety operation ever to happen in the Russian north. The storage is located some 55 kilometers from Russia’s border to Norway in the north.

Radioactive leak in the 80ties

The storage site in Andreeva Bay, located in the Litsa fjord some 55 kilometres from the border to Norway, was built soon after the Soviet navy got its first nuclear powered submarine in the early 1960s. A pool type storage, given the code-name Building No. 5, had a leakage in the early 80s and the lethal fuel elements were urgently transferred to the three dry storage tanks. Supposed to be temporary, the totally run-down tanks have now served for more than 30 years.

In 1995, Norway launched a Plan of Action on nuclear safety in northwest Russia, and three years later a separate Joint Norwegian Russian Commission on Nuclear Safety was established. Norway has since then granted more than 1,5 billion Norwegian kroner (€162 million) into nuclear safety projects in Russia, mainly on the Kola Peninsula.

Nils Bøhmer, nuclear physicist with the Bellona Foundation in Oslo was one of the first outside Russia to study the unsafe conditions of the storage of spent nuclear fuel from older submarine reactors.

«It is very positive that Brende will travel to Andreeva Bay to inspect the first shipment of nuclear fuel. The more international attention and insights that could come, the better,» Bøhmer argues.

He says the potential threats of future radioactive contamination seriously could harm the marine environment in the Barents Sea. «After 20 years of preparation, the upcoming first shipment of nuclear waste away from the rundown storage will be a relief.»

Norway: Secure our own safety

Head of Communication with the Foreign Ministry, Frode Overland Andersen, writes in an e-mail to the Barents Observer that Norway has a self-interest in continuing the nuclear safety cooperation with Russia. «To secure our own safety,» he argues when asked why Norway should continue to finance clean-up work of Russia’s military nuclear waste in a period when Moscow puts billions into building new nuclear powered submarines.

«The plan is to start shipments of spent nuclear fuel from Andreeva Bay later this year, a work that will continue for at least 5-6 years ahead. Norway has together with Russia and international partners had a special commitment,» Overland Andersen says.

Norway has paid for much of the new infrastructure in the Andreeva Bay, like buildings, electricity, physical protection, roads and harbor facilities. The vessel that will transport the uranium fuel to Murmansk is paid by Italy. Four of the special rail wagons to transport the containers further through Russia to Mayak is paid by Norway. Norway has also paid for new sea marks along the coast of the Kola Peninsula, a route that is restricted due to the military Northern fleet’s activities and bases in the area.

How much Norway is willing to pay in the year to come for its nuclear safety cooperation with Russia is not yet decided.

«The Government’s Action Plan on Nuclear Safety (2013-2017) will be revised from 2018 and it is therefore too early to tell the level of further efforts,» Frode Overland Andersen says.

For Børge Brende, the June 27 visit to the Kola Peninsula will be his second this year. In late March, he participated at Russia’s high-profile Arctic conference in Arkhangelsk together with Presidents of Finland and Iceland, and foreign ministers of Denmark and Iceland. The Arkhangelsk visit was Brende’s first to Russia since Moscow’s annexation of Crimea in 2014.