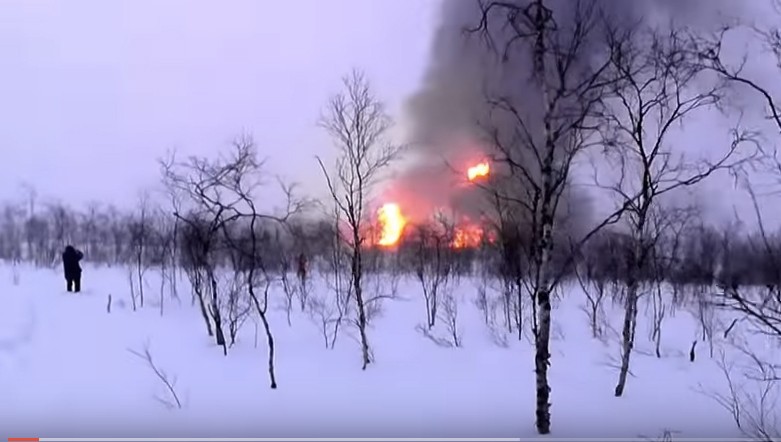 Oil on fire. Screenshot from Savepechora.ru

Locals fear for their health and environmental consequences after more than two weeks of raging fire at an oil field in the northern Russian Komi Republic.
Read in Russian | Читать по-русски
By

The fire in Lukoil’s oil field in Shchelyabozh, near the Komi town of Usinsk, started 10th April and has since created a column of black smoke visible for tens of kilometers away.

A representative of the company now says to 7x7-journal that new efforts are taken to extinguish the fire and the local population has been informed about «upcoming noise in the area».

There are two wells burning, the both belong to the Alabushina field. On site are personnel and equipment from Lukoil and the Russian Ministry of Emergency Situations.

The uncontrolled fire poses a serious threat to the nearby Pechora River and its adjacent wetlands and lakes, regional environmental organisation Save Pechora says.

And it harmful to the wellbeing and health of the local population.

The pollution of oil in the area is not the first. In a letter addressed to the environmental organization, a local inhabitant in the village of Shchelyabozh says their children «are ill all through the year», and that she fears that the whole village ultimately will have to be resettled.