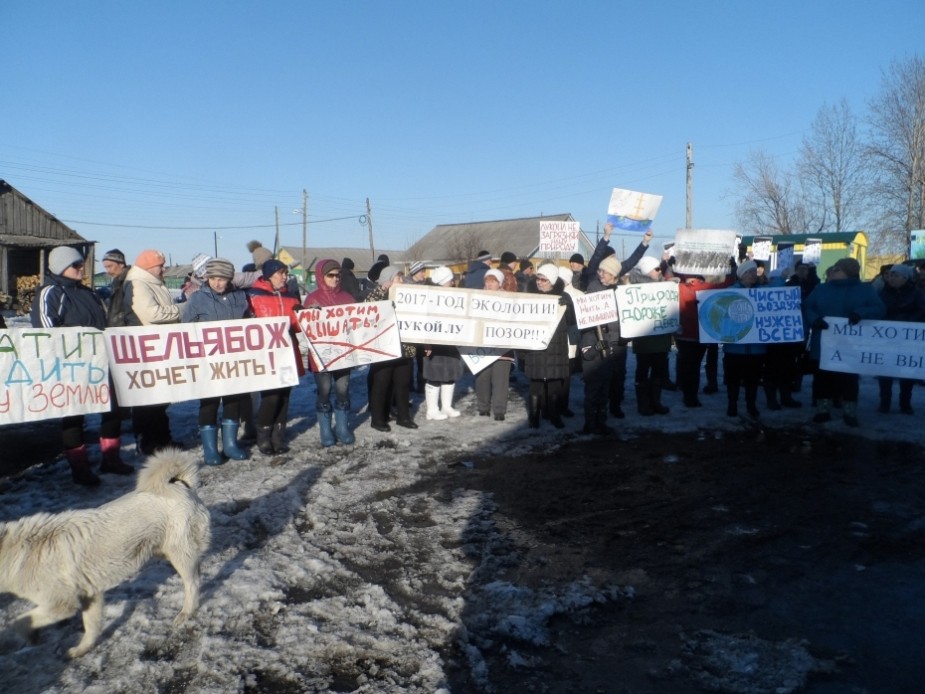 In a rally, the residents of the Shchelyabozh village demand the closure of the nearby Alabushinskoye field and a stop to well drilling along local rivers.
By

Unlike the recent people’s gathering in the village of Novikbozh, the rally in Shchelyabozh passed without attempts of the police to disperse people or to forbid them to speak out. About 100 people gathered near the local club, including representative of the village administration, one policeman and two firefighters.

Local inhabitant Vasily Rochev suggested not to forget the year 1994, when the world’s largest oil spill on land happened in a nearby field.

«Back then they told us: it’s okay, we’ll clean it up, nothing will come to you,» he said. «But the next year, troubles began. Cattle became ill, epizootic started, the local state farm was forced to give its best cows to the meat-packing factory. There was one single diagnosis of these poor animals — a stomach ulcer. Why did this happen? We have meadows in the floodplain of the Pechora River, we were storing food there. But who monitored the health of our citizens? We drank this milk, ate this meat. From 1994 to 1997, we had an outbreak of cancer. Perhaps, it [consequences of oil spill] was the reason why people died. And what will happen to us now, after this accident? We do not believe the employees of Lukoil, they have been deceiving us for many years!»

The residents of Shchelyabozh suspect that there was another oil spill at the Alabushinskoye deposit, the field where Lukoil for a month struggled to extinguish a fire. They are afraid that oil again will fall into pasture lands.

Local residents well remember the character of their relationship with Lukoil-Komi. Developments at the Bayandynskoye deposit began in 2005 on the territory of deer pastures, hunting grounds and places of traditional gathering of mushrooms and berries before the hearings. Lukoil had to pay a fine of 5.5 million rubles for this. «Even then, Lukoil came to our lands with deception, with fraud!» the teacher of the local school Anna Kaneva said indignantly.

The villagers claim that from 2006 to 2010, Lukoil paid 250,000 rubles to the local administrations of the Usinsk District. However, locals felt little from those money. Since 2007, they have complained that they feel the smell of hydrogen sulfide in the village, diseases became more frequent among locals, especially respiratory diseases. In 2013, the smell of gas from the deposits was so strong that the schools kids had to take exams in cotton-gauze dressings. In 2014, Lukoil-Komi installed a gas analyzer on the local school building. But this device is designed for industrial sites and reacts only to very high contents of hydrogen sulphide in the air. The reserves of hydrogen sulphide in the fields are such that even a plant for processing sulfur was launched near them in 2015. Sergei Gaplikov, Head of the Komi Republic, visited the opening.

In 2017, announced by President Putin as the Year of Ecology, wells of Alabushinskoye started burning. According to local residents, for some time they were burning so brightly that the village administration turned off street lighting.

«I want to get an apology from the president of Lukoil Vagit Alekperov for deceiving the residents of our village in installing industrial gas analyzers that did not show actual air pollution,» Anna Kaneva said. ‘We demand a closure and a stop to the further development of the Alabushinskoye deposit, we demand to prohibit the construction and installation of oil wells in the floodplains of the northern rivers. And we demand to determine sanitary zones for gathering wild plants and catching fish, because we do not know now where to pick berries. We will gather, eat, and then we’ll be ill.»

The woman read out other demands of the Shchelyabozh residents: make independent monitoring of water, air and soil, conduct medical examination of local residents, stop development of deposits in places of primordial economic activity of the population and replace the gas analyzer on the school building. The villagers appealed to the city administration to stop preventing local residents from holding rallies. «We demand freedom of speech!» Kaneva finished her speech.

«The slogan ‘More Usinsk oil to the Motherland’, in my opinion, was replaced by the slogan ‘Oil at any cost!’. This is scary,» another resident of Shchelyabozh said to his fellow villagers. «Yes, we need oil, but we should think about people.»

The resolution signed during the rally also included a term demanding restoration of the Ministry of Natural Resources and Environmental Protection of the republic. Shchelyabozhtsy decided to hold another protest rally on May 28 in solidarity with the village of Ust-Usa and the village of Novikbozh, where the administration of Usinsk tried to prevent the people’s gathering on May 14.

The first well in the Alabushinskoye deposit caught fire on April 10. The second well — two days later. The fire on the first was extinguished only on May 7, on the second — on May 11.

On April 27, the wells were fired from an artillery gun to knock down the metal parts. Participants in the elimination of the fire made a video of a moment of shelling.

On May 11, residents of the village of Kolva, regularly suffering from oil pollution, demanded that the Usinsk administration and Lukoil-Komi company conduct independent environmental monitoring in settlements near oil deposits.

On May 14, Usinsk police tried to disrupt the people’s gathering on the accident at the Alabushinskoye deposit in the village of Novikbozh.